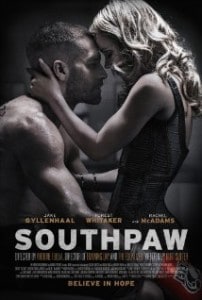 Redemptive boxing stories are old had; almost as familiar as riches to rags to emotional awakening boxing stories. Southpaw adds little to the formula. Despite director Antoine Fuqua’s signature gritty sheen and some heavy lifting – in both physical preparation and an attempt to elevate the material – from star Jake Gyllenhaal, the film can’t conceal its prescribed signposts. There’s tragedy, a stripping away of material wealth, and a fracturing of family, followed by a training montage and a final physical confrontation that serves as a metaphor for overcoming personal struggles.

Gyllenhaal plays Billy Hope, a product of the New York City foster care system who has become the undefeated light heavyweight champion of the world. He’s got the ridiculously huge mansion, beautiful and supportive wife Maureen (Rachel McAdams), precocious daughter Leila (Oona Laurence), and a loyal posse. Maureen insulates Billy from the responsibilities outside the ring, including promoter Jordan Mains (Curtis “50 Cent” Jackson). When sudden familial disaster strikes, Billy loses everything and turns to no-nonsense trainer Tick Wills (Forest Whitaker) to help him get back on track.

A solid opening hints, for a few fleeting moments, that Southpaw will differentiate itself. Hope is established as a brawler with a permanent chip on his shoulder that charges his opponents head on. The initial match leaves him scarred, coughing blood, and barely able to walk. He and Mains naturally start thinking of the next fight, while Maureen ably ends the immediate planning. When Billy’s ego – an ego that no doubt helped him scrap to the top – doesn’t allow him to back down from the verbal barbs of new contender “Magic” Escobar (Miguel Gomez), the worst happens in the scrum, and the broken-down champ is sent adrift.

The struggle of dealing with the maelstrom of despair is worn on Gyllenhaal’s face and seen in his slouched shuffle, but that only takes the narrative so far. Screenwriter Kurt Sutter was successful in spreading his rugged Shakespearean tragedy over seven seasons of Sons of Anarchy, but when condensed to a two-hour feature the sentimentality and brutality never click. 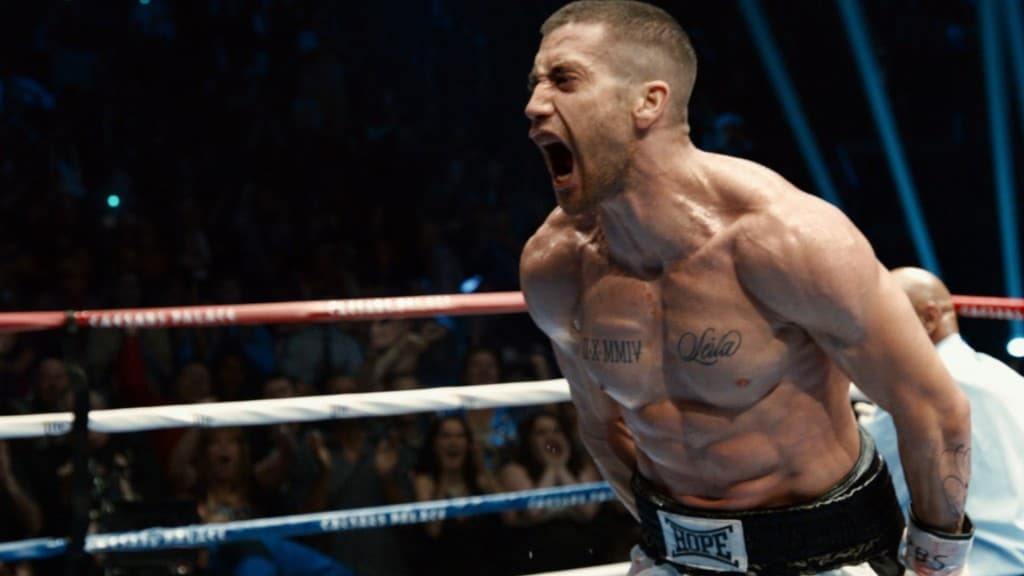 We’re pummeled with depression and quick redemption, the anguish growing repetitive and only serving the plot rather than strengthening the relationships between characters. There’s a clunky setup with the important partnership between Hope and Tick and the impetus for them teaming up feels arbitrary, though the chemistry between Gyllenhaal and Whitaker is strong.

The entire back half of the film bounces between Hope the fighter getting guidance from Tick and Hope the father attempting to reconnect with Leila. In case we weren’t clear of the goals here, Hope occasionally flashes his forearm tattoos that read “fighter” and “father.” Whitaker and Laurence are each solid in their roles, but even though they have adequate screen time they aren’t allowed to make much of an emotional impact, serving only as cogs in Hope’s reclamation machine. One particularly poorly handled and minute subplot involving a kid at Tick’s gym is entirely manufactured and manipulative, and it’s impressive that Whitaker almost makes us believe (yet another) sad story provides the necessary motivation to train Billy for a title match.

Of course, any and all of the complicated feelings and life lessons come down to a final in-ring battle between Hope and “Magic,” and while the score from the late James Horner and some unique POV shots during the fray provide some thrills, the endgame is standard and also hollow.