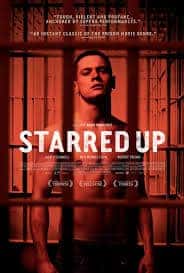 The title of the film refers to the premature transfer of a criminal from juvenile detention to adult prison which is where Starred Up begins its story – the fresh arrival of Eric Love (Jack O’Connell), an aggressive teenager willing to survive by any means necessary. Those means consist, almost exclusively, of violence and obscenity-laden verbal attacks meant to intimidate until a ray of hope presents itself through a therapy group led by Oliver (Rupert Friend). The film is based on first-time screenwriter Jonathan Asser’s twelve years of experience as a prison therapist, twelve years brilliantly condensed into one taut, brutal prison drama.

Shot in intimate hand-held by cinematographer Michael McDonough, the viewer is introduced to Eric as he goes through the admission phase, seemingly in real time, quickly setting the film’s tone. One that is claustrophobic and unflinching in its depiction of prison life with everyone constantly looking over both shoulders. For Eric any sudden or quick movement from others are instantly perceived as threats with Eric acting accordingly. Within a matter of days one such instance arises as he misreads a friendly gesture and dispenses a vicious beatdown that ultimately leads to an oiled-up standoff with the riot gear outfitted guards.

In short, Eric is a volatile mixture of energy, strength and ingenuity, ready to explode at the slightest hint of danger, tangible or perceived. Those aren’t the only triggers, the fact that his father, Neville (Ben Mendelsohn), happens to reside on the same wing doesn’t help matters much as he attempts to make up for lost time with hands-on parenting that results in embarrassment and shame for Eric, who overcompensates with double-fisted violence in an inflated display of masculinity.

Starred up could also refer to Jack O’Connell himself as his performance is an emphatic statement pronouncing that he is more than ready for a steady diet of leading man material. O’Connell excels at every turn, brilliantly communicating all of the nuances that make up the complex Eric Love and his unique situation. He effortlessly maneuvers between a cocky, foul-mouthed harbinger of pain and a damaged, fragile young man growing ever more anxious and frustrated.

While O’Connell seizes every opportunity to shine, the rest of the supporting cast deliver strong performances, starting with the always dependable Mendelsohn as the conflicted father stuck between his prison alliances and his son. The other standouts come in the form of the therapy group members – David Ajala, Ashley Chin, Anthony Welsh, and Gershwyn Eustache Jnr –  all of whom do a fantastic job providing some levity to the brutality of the film in between their own bursts of macho-posturing where the words fuck and cunt are thrown about like breadcrumbs from a park bench.

Unfortunately, Starred Up stumbles down the stretch with the film’s culminating action that wonders away from the carefully-crafted realism that proceeded. It’s a relatively small misstep that is easily forgivable given the strength of the non-judgmental screenplay and the performances. All of which combine to make Starred Up, quite possibly, an instant prison drama classic.