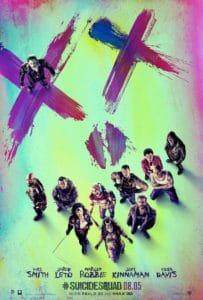 Talk about a bait-and-switch. Suicide Squad is not the movie advertised under that title in trailers and TV spots for the past several months. The comic book tale of bad guys teaming up – and make no mistake they are definitely bad guys, as the movie reminds us with dialogue constantly – to take down an even worse threat was positioned as a bit of a poppy, fun course correction for the so far muddled and dour DC Extended Universe. In actuality, it fits right in.

Sloppily cut together, tonally jagged, and bearing other earmarks of a by-committee design, Suicide Squad has trouble establishing its team members and reasons for us to be interested in any of them or their mission. Though writer/director David Ayer seems to be working under the assumption that we know these rouges, the first act is pretty much a collection of mini-trailers introducing us to the members of the squad. Their dossiers are contained in a government binder labeled “TOP SECRET” so we know they’re heavy hitters. All of them even get their own soundtrack song, all obvious classic rock or hip hop tunes that’ve been used, and better, before.

Crack assassin-for-hire Deadshot (Will Smith) and Harley Quinn (Margot Robbie), the Joker’s former psychiatrist turned psychotic gal-pal, get two introductions/songs each. It makes sense that the biggest stars and most well-known characters (I guess) get more attention, and Smith and Robbie are the highlights of the movie. However, their moments of levity and flirtations with meaningful dramatic beats feel grafted onto a recycled, compulsory post-modern comic book plot where metahumans, as DC calls them, determine the fate of the world by punching and shooting each other on dimly-lit sets. Try as they might, the anti-heroics of Smith and Robbie cannot save Suicide Squad from itself.

The TOP SECRET binder belongs to government agent Amanda Waller (Viola Davis), who capitalizes on political and military fears in the wake of Superman’s arrival and “death” to launch her Task Force X program. She wants to recruit “the worst of the worst” imprisoned metahumans to use as weapons against any potential supernatural baddies. Joining Deadshot and Harley Quinn on her list are El Diablo (Jay Hernandez), Captain Boomerang (Jai Courtney), and Killer Croc (Adewale Akinnuoye-Agbaje). Also entering the fray are Katana (Karen Fukuhara) and poor Slipknot (Adam Beach), who is introduced as an afterthought, probably out of cannon obligation, and will be quickly forgotten. The crew will take orders from Waller underling Colonel Rick Flag (Joel Kinnaman, too good at being the dull straight man). 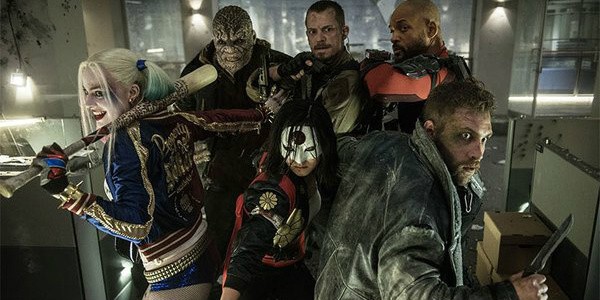 It’s a good thing Task Force X is approved because as soon as it is The Enchantress, an ancient witch inhabiting the body of archeologist – and main squeeze of Colonel Flag, June Moone, unleashes mystical bedlam on Midway City. Apparently, Enchantress was completely under the control of Waller until she was needed to kick the unnecessarily convoluted story into gear.

Coherence is not a strong suit of Suicide Squad, as Ayer struggles to stitch the very diverse characters, their backstories, and their motivations together. One of the most unintentionally funny developments is scientist Moone discovering a primeval statuette in a cave full of skulls. Her first instinct? Tear its head off. Probably not a good idea. When Enchantress takes over, she’s a wholly uninteresting villain, building some sort of doomsday device while rhythmically gyrating her hips.

And, oh yeah, The Joker (Jared Leto) is hanging around sort of. For all the talk of Leto’s method acting antics on set, he sure feels inconsequential to the proceedings, appearing in only a handful of scenes, half of them flashbacks. Leto tries way too hard to look and sound cool; to the point of being decidedly uncool. His act is as transparent as the “Damaged” tattoo on his forehead. 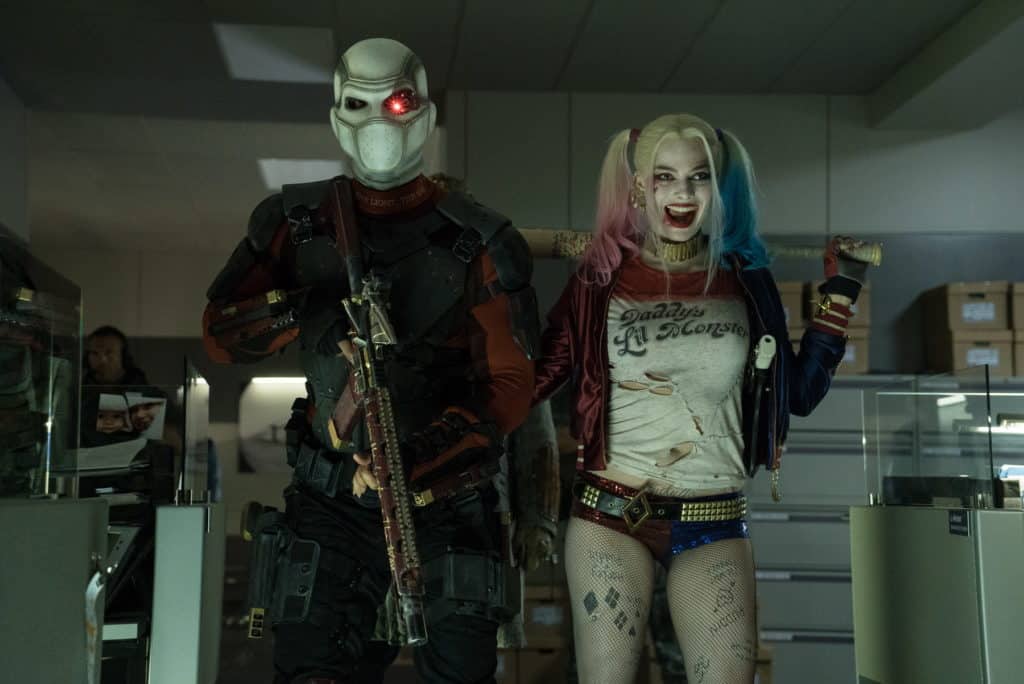 The mission, which starts unceremoniously without a clear goal (and with an eye-roll inducing hip hop music cue, naturally), fails to capitalize on any team dynamics. The group has no training and isn’t even introduced to each other until they’re dropped into a ravaged city. There, they fight Enchantress’ faceless goons by bludgeoning them – Harley with her baseball bat and Killer Croc with his powerful reptilian hands. It all plays out like straightforward videogame levels as they work their way through a streetscape, a skyscraper, and finally the evil boss’ lair. There’s no interesting mesh of their extraordinary talents or escalating of stakes.

Diablo, who has the most super of superhuman abilities – shooting and controlling fire, refuses at first to unleash hell because of a weak melodramatic backstory. His tale is told late in the film and is meant to help ground the team’s questionable moralities. It doesn’t work, and neither does the moment he lets loose. His role in the climax is getting into a glorified fistfight with a gigantic demon.

For all its lame attempts to Guardians of the Galaxy-ify the DC Universe – the pop songs, the scofflaw team-up, etc. – and change things up, Suicide Squad is just more of the same joyless, plodding, pointless pageantry. It may posture as edgy, but this bleak, uninteresting adventure is nothing if not bland convention.