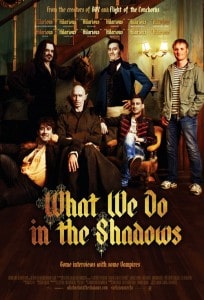 Before watching Taika Waititi and Jemaine Clemont’s latest, What We Do in the Shadows, I thought that the concept of the mockumentary was dead.  Too often are we seeing this storytelling device being used in horror films, comedies, and even action flicks.  Shadows breathes from much needed undead life back into the style however, with a clever and uproariously funny film about vampire flat mates.

The film’s premise revolves around a documentary film crew being given unprecedented access into the lives of four vampires living together in a house in New Zealand.  The crew intends to document their daily lives up until they attend a big yearly masquerade ball with their fellow vamps, witches, and zombies.

We begin with Taika Waititi introducing himself as Viago, an overly flamboyant dandy who proves to be the funniest of the bunch, although each brings their own hilarious personality to the table.  Viago then takes the crew around and introduces the rest of the gang.  There’s Petyr the oldest of the bunch, who looks like the classic Nosferatu style of vampire.  Deacon (Jonathan Brugh) is the youngest, and is considered the rebel of the group.  Vladislav, played by Jemaine Clement, is the most promiscuous, with a penchant for ladies and poking.

The film is at its funniest in the first act, when we see how these characters live their lives.  All the vampire tropes are covered, from having no reflection in the mirror to shape shifting into bats and other creatures.  We learn that these aren’t simply any one specific vampire, they are a combination of all the vampire lore.  While we’ve seen other films play with this subgenre in a comedic way, this is by far the most effective, combining goofball visual gags, with a genuinely funny and smart script.  For fans of Clement and Waititi’s other works, you’ll know what to expect and not be let down.

As the film progresses, Nick (Cori Gonzalez-Macuer), a newly turned vampire joins their clan, which causes tension between the roommates.  With Nick, comes his best friend Stu, who is a human.  Stu’s presence throughout the film is absolutely hilarious, and an excellent addition.

Much of the comedy is based around the fact that these men are ancient creatures with supernatural powers.  Simple arguments turn into violent mid-air fistfights.  Eating a simple meal turns into a bloodbath, and contention over a chore wheel can last for years.  Vampires are ridiculous, and Clement and Waititi take full advantage of this in the funniest ways possible.

What We Do in the Shadows is a fun spoof that piles on the laughs while keeping within the macabre tones of classic vampire stories.  It’s goofy without feeling dumb, which is what tends to happen in films like this.  It’s also at times very morbid and violent, but in a lighthearted, fun sort of way.  There’s just something hilarious about Taika Waititi prepping to drain someone of their live giving fluids by placing newspaper all around only to hit an artery and spray blood all over the room.  Even as I’m writing this on a plane it’s making me laugh.  This will be one of the best comedies of the year so be sure to check it out.