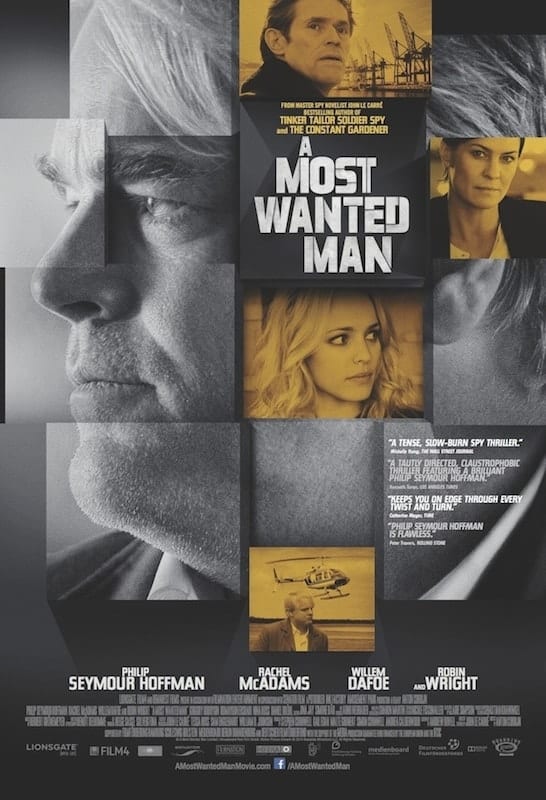 Based on the John le Carré novel by the same name, Anton Corbijn’s A Most Wanted Man strips away the stylish veneer of other adaptations such as Tinker Tailor Soldier Spy, and brings us a slow burn spy flick that manages to barely entertainin despite the great cast and decent performances.

Taking place in post-9/11 Hamburg, Phillip Seymour Hoffman plays Günther Bachmann, the lead spy in an organization designed to infiltrate and gather information on terrorist cells within the country.  One day the group receives intel that a Chechen Muslim that has known ties to terrorist groups has entered the country and is attempting to contact a wealthy banker, played by Willem Dafoe.

After hiding out in a kind families home, the Chechen gets introduced to a lawyer, played by Rachel McAdams, who decides to help him try to get asylum if possible.  What proceeds is a complex story filled with alliances, double crosses, and plenty of espionage, however don’t think that you’re about to see an action packed thrill ride.

This is a plodding and calculated thriller that relies on the more subdued tension of someone signed a document rather than car chases and gunfights.  It’s overly long and could have been trimmed down, however like Tinker Tailor, sometimes the more realistic spy flicks can be just as interesting.

While all the performances were fairly well done, Philip Seymour Hoffman as the wisecracking, whiskey drinking, chain-smoking boss was by far the best.  The fact that these are all American actors playing Germans (with the exception of Robin Wright) felt slightly odd at times though.  They mostly speak English in a German accent, which mostly works, but it proves to be distracting at points especially since they sometimes opt to actually speak German.

Having not read the novel, I can’t speak to how the story was translated into the film, but I would imagine some of the characters are more developed in the book.  One of Hoffman’s main informants is the son of a prominent Muslim leader, however we never really know why he’s working with them.  It also seems like Robin Wright and Daniel Brühl’s characters should have had more to do.

For fans of calculating and methodical espionage flicks, A Most Wanted Man is sure to please.  Most people will probably find the story a bit too generic and even boring at times.  That isn’t to say it isn’t a good film or not worth seeing, just be aware this isn’t intended to be a white-knuckle thrill ride.