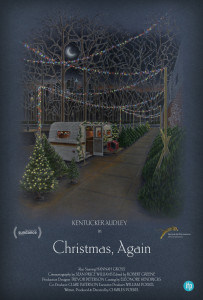 Yet another indie Christmas-themed film thickly coated in an overall sense of bah humbug. Even the film’s title suggests a feeling of irritation towards the recent influx of holiday melancholy over the years. However, first-time writer/director Charles Poekel’s Christmas, Again reverses the trend with an uplifting tale of one man’s emotional turnaround at the hands of some old-fashioned Christmas spirit.

For five straight years, Noel (Kentucker Audley) has traveled from upstate New York to Brooklyn in order to sell Christmas trees on the sidewalk. Mostly working the night shift, Noel struggles mightily to maintain an affable demeanor in the face of demanding customers and lackluster co-workers due to the fact that he misses his old crew; more specifically, his girlfriend.

It’s a simple story. One of heartbreak, staving off those overwhelming emotions when faced with an endless parade of idyllic couples basking in the holiday cheer. Noel does his best to quell his sadness, withdrawing almost entirely into his routine of needle-sweeping, not sleeping and the pills housed in his advent calendar. That is until a kind act on his part slowly begins to pull him out of his downward spiral into despondency.

Poekel does not appear to be interested in convoluted storylines or overly-dramatic character developments; rather, he focuses his attention on the emotional impact that lie in the quiet moments of human interactions. With Christmas, Again he presents Noel as nothing more than a dispirited Christmas tree salesman trying his best to work through a rough patch that just happens to fall around the holiday season. Sure, he’s an emotionally complex individual, although the way in which Poekel presents Noel’s current mood is resolutely restrained in every way possible. Nothing flashy, nothing superfluous.

An unadorned narrative, with its emotions flowing deep beneath the surface and also economical with its dialogue and plot developments, needs a strong central performance in order for it to work and that’s exactly what Poekel gets from Kentucker Audley. His portrayal of a man engulfed in grief is something to behold. Full of nuance, he delivers a muted performance wherein a prequel of Christmas, Again plays out in his pained facial expressions. No exposition needed when everything is written on Audley’s face.

Audley’s performance is complemented nicely by Hannah Gross, personifying Noel’s turning point, as she makes the most of her limited screen-time. These sincere, direct turns are captured wonderfully by Sean Price Williams’s intimate lens, framing all of these small, yet substantial, moments with tenderness and warmth.

Poekel’s debut is by no means revolutionary or game-changing, but it never seems to be preoccupied with those intentions. It’s content with being a simple, heartwarming story of one man’s return from the brink through a little victory, a shared moment of unencumbered happiness. Infinitely significant without feeling the need to over-embellish.