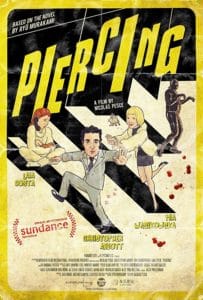 In Piercing, Nicolas Pesce’s follow-up to the beautiful and disturbing 2016 film, The Eyes Of My Mother, the director stays within the horror genre, this time adapting Ryu Murakami’s novel of the same name and framing it within a stylistic giallo veneer.

The film opens with Reed, played by Christopher Abbott slowly moving an ice pick towards his infant daughter. In order to protect his family from the dark urges rising up inside of him, he devises a plan to call an escort service specializing in S&M and murder the woman they send him.

Though it’s touched upon, but not fully explored, Reed was involved in an abusive childhood incident that resulted in the stabbing death of someone when he was a teenager. This event and the ever-present trauma that it caused proves to be the catalyst for his homicidal tendencies, however this aspect of the film never felt fully developed and seems to have some omissions from the novel.

Reed plans out the murder of the escort down to the minute, poring over every detail, but when the woman, Jackie, played by the always-wonderful Mia Wasikowska, arrives, it becomes clear that Reed may not be the most unstable person in the room.

What transpires is a strange game of cat and mouse where the two become at once infatuated with and homicidal toward one another. It’s an unhealthy relationship to say the least, one that goes to some very disturbing places. 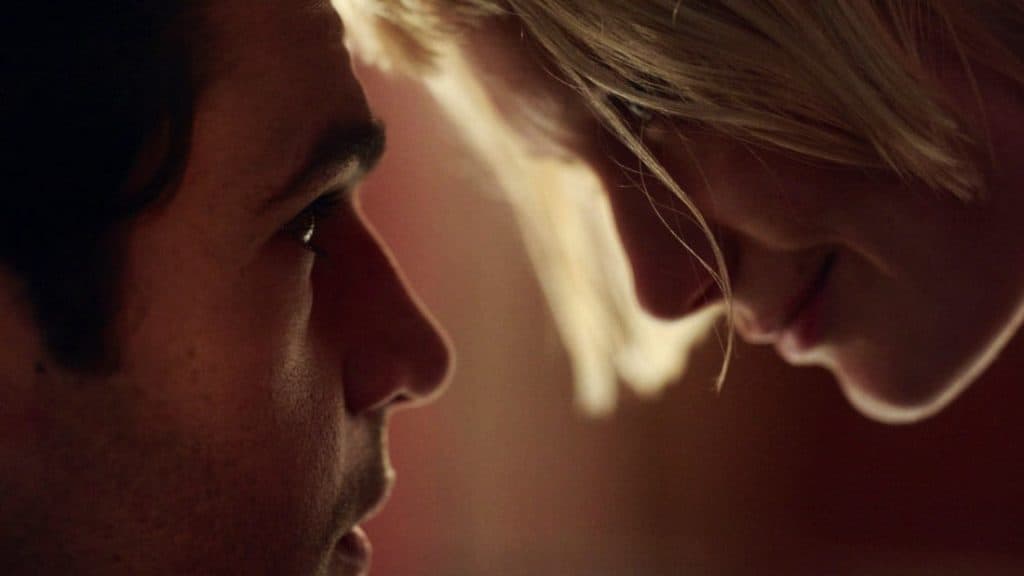 From its killer opening titles and score, it’s clear that Pesce was tapping into Italian giallo films for inspiration on the look and style of Piercing. Everything has a seventies aesthetic, and the bold use of yellow, especially with a certain hotel phone, pays homage to the trashy crime novels that sparked the subgenre.

He uses split-screen techniques to further enhance the style and even uses Goblin’s main title song from Argento’s Deep Red in one amazingly shot sequence. I fell in love with this director’s style in The Eyes of My Mother, which now carries over to Piercing. It’s an awesome looking movie and worth seeing for the visuals alone.

As Reed and Jackie’s back-and-forth becomes more and more violent, it becomes evident that this is from the same mind that brought us Audition, and if you saw that film or read the book, you’ll have an idea of what kind of disturbing torture you’re in for. Pesce handled these elements well, balancing the shock of what’s unfolding on screen with dark humor. The violence never goes overboard, but it’s still not recommended for the faint hearted.

Piercing is an early contender for horror film of the year and a great sophomore effort from Nicolas Pesce. Having not read the novel, I can’t speak to the source material, but bringing the Japanese story into a giallo-style setting seems to fit perfectly; and I’m terribly excited to see what’s next for this director. Sexy, brutal, disturbing, Piercing is not one to be missed.