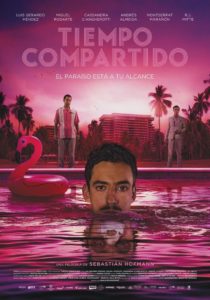 This is a repost of our review from Sundance 2018. Time Share is available now on Netflix.

One wonders who could ever find a moment of soul-healing relaxation in the predatory atmosphere of a timeshare’s resort grounds. In his latest, Sebastian Hofmann has a particular axe to grind against this system of manipulation that sells you on a streamlined paradise by dangling the experience in front of your face until you feel pressured to sign yourself away to two weeks out of the year for the rest of your life.

Sensing a ripe parallel to the operation of a cult, Time Share (Tiempo Compartido) is a haunting and scathing indictment of the dehumanizing qualities the artificial vacation industry inflicts on its patrons and repackages them into a moving horror film experience that finds abject terror in the prospect of a holiday gone awry.

Gutting and riddled with tension in a way you aren’t entirely sure about, given its lush aesthetics and beguiling sets, it could only be assumed that the director really needed to air this grievance out for the film to be so successful to generate horror out of the commonplace as he does here.

Hofmann aims for a slow boil, beginning as he does with an almost Satre or Kafka scenario of put-upon family man Pedro (Luis Gerardo Méndez) at the mercy of a reticent system. Arriving at the Everfield’s Resort (“Paradise is within reach”) to discover their sales promotion has booked another family into their room, the slights against him mount gradually until the pangs of cult indoctrination become oppressive and he feels threatened. 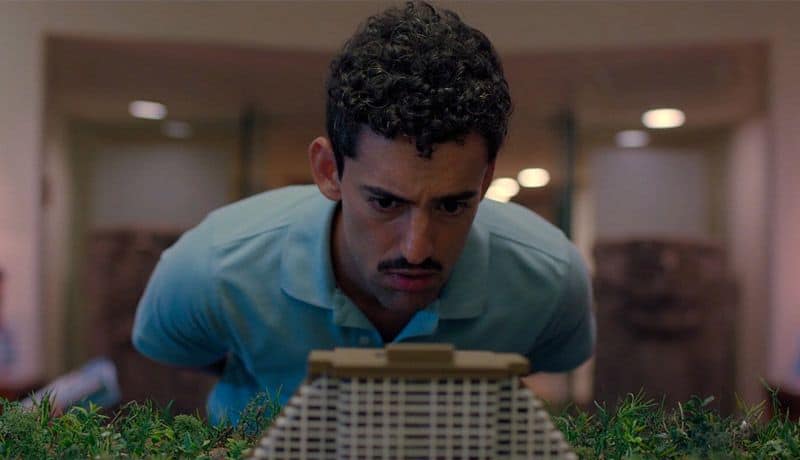 Skeptical as he is, Pedro worries how this buffoonish family sharing their space is selling his wife and child on the resort as being a part of a big happy family and how their actions and the interventions of the resort staff gradually turn them against him in an excellent utilization of mounting terror.

You wind up empathizing greatly with the tortured Pedro, whose tortures shift sporadically from manipulation by the imposing guests, who act as if they were family, to near fatal “accidents” on the part of the staff, such as a horrifying tennis lesson scene that borders on the visceral. He feels the walls of this Scientology-esque establishment closing in on him, and his crusade for his family and his sanity is manically compelling, given how lightly the film approaches actual menace.

It’s all relegated to the style to tell the story more than the story does, and for his part, Hofmman has made an expertly crafted horror film based on mood, tone and atmosphere over action. Shot in harsh contrast lighting, the set of this resort often borders on Facist architecture in how nearly every composed shot seems designed to show how insignificant Pedro really is in this system. There’s some excellent usage of scale and blocking to really sell you on the subtle sinister atmosphere the film takes on the way our main characters are dwarfed by the massive structures and claustrophobic mise-en-scène supposedly dedicated to their relaxation.

The style becomes even more pointed in the B-Story of resort employee Andrés, whose over exposure to this vacation culture has left him with a broken family and being socially disconnected. There, Hofmann holds shots for uncomfortable lengths as Andrés drudges through the labyrinthian underside of the resort’s employee-only sections, the weight of this system already having taken its toll on his mental faculties as he just drifts aimlessly and mechanically through his work schedule. 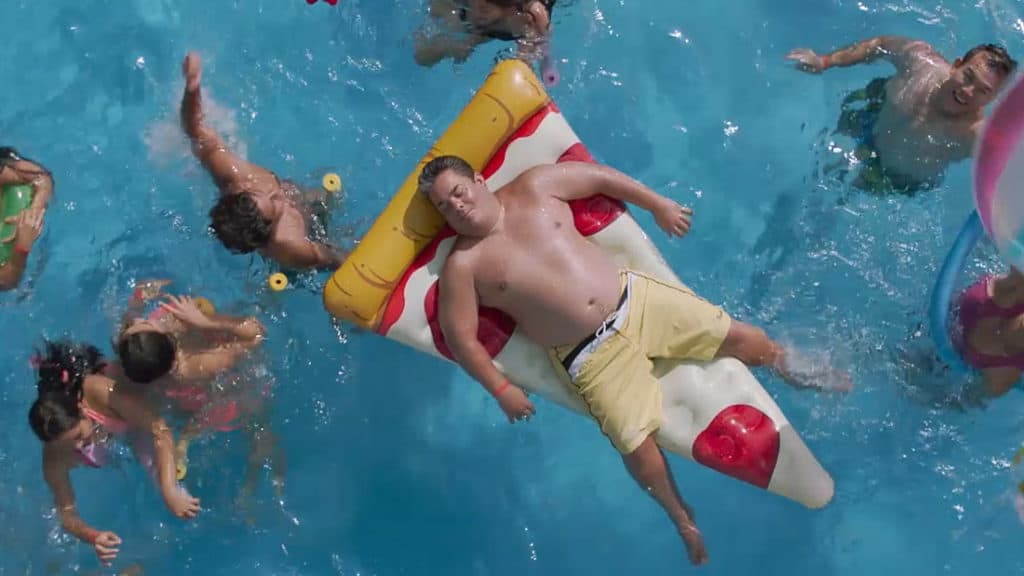 Shared as this film is between Pedro and Andrés in their harmonious styles, the crossed-narrative structure plays incredibly well by giving us insight to where Pedro’s struggles could lead in this well-rounded script. There is no question, however, that Hofmann enlists his aesthetics to do the majority of the lifting in the audience-resonance department.

As a writer, he and partner Julio Chavezmontes are sparse on detail, both in their utilization of dialogue as well as their formation of a narrative. Juxtaposing the gradually antagonized family man Pedro with the brow-beaten, insignificant cog in the system that is Andrés touches on the theme of the interpersonal alienation that resort culture cultivates, but the script is never really pointed enough to belabor the point, thankfully.

Hofmann remains aloof as a dramatist, letting this week’s stay at the gentrified tropical paradise that is the Everfield’s Timeshare Resort unfold slowly and poignantly with a distant but unmistakable sinister quality hanging over the minutia of its vacation schedule. There’s a dissociative quality to how he plots his story, not unlike a Yorgos Lanthimos would by betraying the quotidian surface with devastatingly effective application of atmosphere.

Though light on particulars, Time Share manages to remain focused in its pitch-perfect storytelling and proves the suggestion of menace is often more powerful than a stated threat. There’s an obvious audience for this bizarre non-horror experience in how it responds to known reservations about timeshare resort culture and mills them for horror effect. But so masterfully directed is Time Share that its tale of wolfish sales tactics crosses over from petty satire and enters into emphatic human drama. Oppressive in its atmosphere and just plain gorgeous to take in, it’s a film that turns paradise into a nightmare, refusing to let you go.