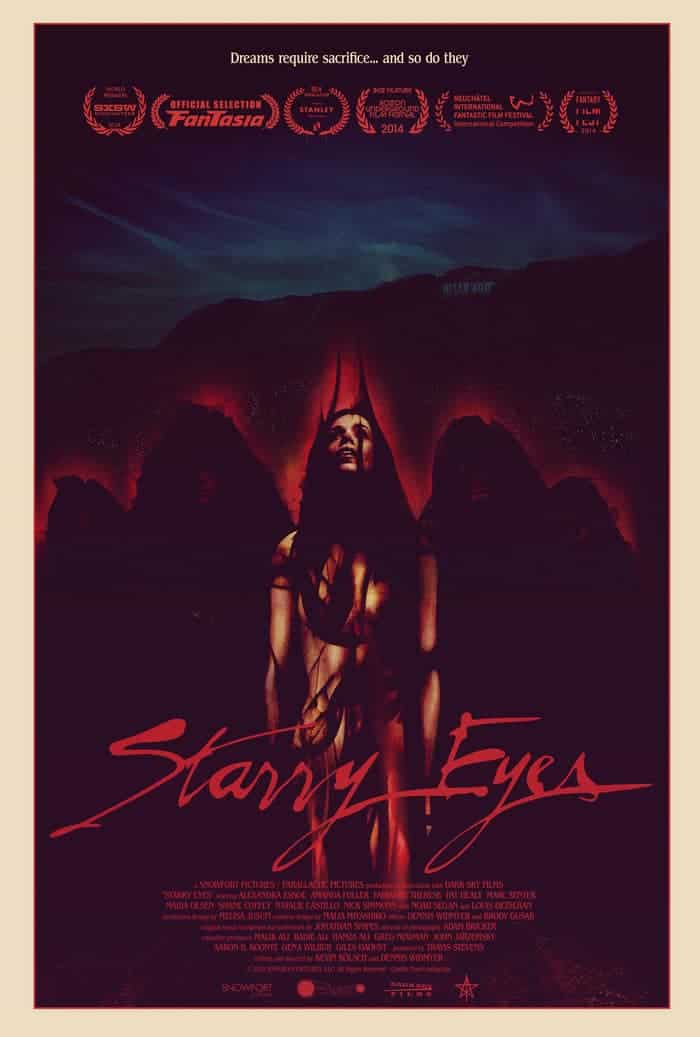 Some people are willing to do anything for fame.  Sleep with a producer, humiliate themselves on a reality show, or even sell their body to a creepy satan cult.  In directors Kevin Kolsch and Dennis Widmyer’s Starry Eyes, they explore that last one in great detail.  This is slow burn horror at it’s best- slowly revealing itself to the audience before exploding into a torrent of carnage and mayhem.  Featuring scenes of excessive creepiness and sparse bits of extreme violence, this is the perfect example of how horror movies used to be.

Sarah (Alex Essoe) plays an aspiring young actress heading to an audition to what could be the role to finally break her into the business.  After believing that she bombed it, we discover Sarah has an unusual coping mechanism- she rips out her hair in big clumps.  After witnessing her freakout in the bathroom, one of the casting agents calls her back into to do the same thing again in front of them.  This results in a callback, however this role is not anything like what she expects.

The film plays out similarly to another body horror flick released last year titled Contracted, only much better.  Both films focus on a young woman going through a horrific transformation, however whereas Contracted looks at the perils of unprotected sex, Starry Eyes focuses on ones drive to succeed no matter the cost.  That being said, if the particularly gruesome moments in Contracted made you nauseous, prepare for a rehash of those feelings here.

The directors take their time developing the story and the characters.  We get to know Sarah and how driven she is at making it in Hollywood and we get to know her friends, some of whom encourage her and others want her to fail.  Understanding these characters is pivotal in making the finale all the more impactful, however it still seems like some aspects of the narrative could have been trimmed.

When the S does begin to hit the F the pace ramps up from a crawl to a gallop to a sprint.  The special effects and makeup were excellent and aided in both grossing us out over Sarah’s transformation and the shocking, brutal violence we were baring witness to.

Another highly notable element in Starry Eyes is the opening titles, which were simple but had a wonderful throw back look, and the fantastic score by Jonathan Snipes.  The ‘80s sounding synth soundtrack propelled us from scene to scene and was a perfect companion to the film.

Some may find the slow pacing in Starry Eyes to be too plodding, but fans of slow burn horror will find a whole lot to like in this stylish and cool body horror flick that will make you laugh before making you wretch.