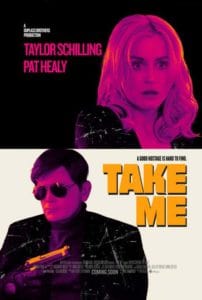 This is a review from the Tribeca 2017 screening of Take Me. The film opens in theaters and on VOD platforms Friday.

Although the concept of someone paying money to take part in a simulated abduction may sound ludicrous, it’s a very real thing and is the subject of Pat Healy’s directorial debut, Take Me. Those who have far too much money and not enough excitement in their lives can pay a company to randomly kidnap and torture them for a specified amount of time. Again this is a real thing; check out Blackout if you’re curious.

Healy relishes in the silliness of the concept, casting himself in the lead role as Ray, a wig-wearing loser who can’t get a break after his kidnapping business begins to tank. Just before he hits rock bottom, he gets a mysterious phone call from Anna St. Clair, a seemingly well off executive played by Taylor Schilling, offering him many times his normal rate to kidnap her for an entire weekend.

Although his normal “sessions” are 8 hours so as to not raise suspicion from family, friends or the authorities, he makes an exception due to the fat stacks she’s promising him. He also reluctantly agrees to be more physically aggressive with her and to amend his no slapping policy for this occasion.

The abduction itself goes off without a hitch, despite some predictable resistance from Anna, but things quickly start to escalate when Ray begins to believe that there’s a possibility Anna didn’t hire him to kidnap her at all. He realizes if he lets her go that she’ll go to the police, so he decides to become a real kidnapper and hold onto her until she accepts that this was all a misunderstanding. It doesn’t go well for him. 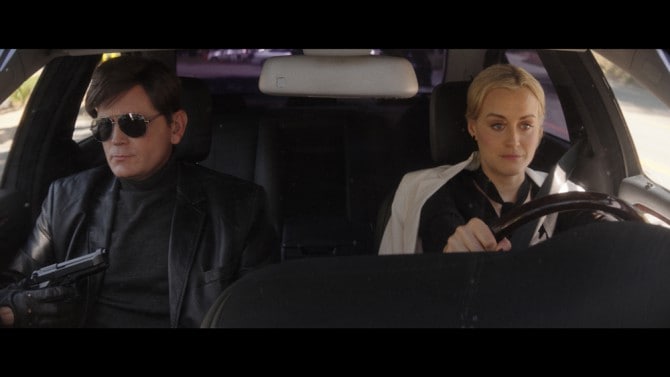 Healy comes out of the gate strong as a director, blending a goofy crime comedy with a surprisingly deep character study of two individuals in two very different stations in life, but whose shared experience helps them learn a bit about each other and themselves. Or maybe not, we’re not really sure.

Written by Mike Makowsky, Take Me manages to maintain a decent level of humor without ever feeling stupid or empty. It goes to slightly dramatic territory when Ray’s past is brought up, but a full explanation of his downfall is never given; it’s only alluded to that something terrible happened in his early days of running the business with his now-ex wife in Atlantic City.

Healy and Schilling have fantastic onscreen chemistry with Anna immediately seeing through Ray’s false confidence and quickly turning the tables on him. Try as he might, she’s always a step ahead of him, and it doesn’t take long before he realizes he’s completely out of his league. Schilling’s domineering, well-dressed Anna is the perfect antithesis to Ray’s stained shirts and nervous peacocking.

Take Me is a solid directorial debut from Pat Healy and will hopefully be a sign of good things to come as he transitions to a career behind the camera. Funny and entertaining with a couple of great performances from its leads, this one is worth a look.