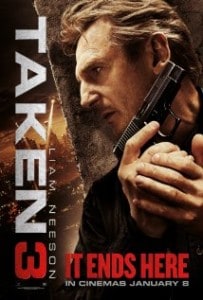 It all started with that phone call in the trailer for 2008’s Taken. Liam Neeson’s intimidating, measured voice calmly relayed a “particular set of skills” to the unfortunate thugs who kidnapped his character’s daughter. Audiences were sold and an unlikely 50-something action hero was born.

The movie itself was a by-the-numbers action/thriller where the protagonist faced little resistance in his hero’s journey, but there was some novelty in watching the guy who played Oskar Schindler punch and shoot his way through a string of baddies. That novelty has worn off after a steady stream of Neeson-headlined actioners of wildly varying quality. The Taken series is at the low end of that spectrum, and Taken 3 is by far the worst of the bunch, stretching the conceit beyond any conceivable viability. It’s a cash grab of the lowest order, insulting the audience’s intelligence and testing their patience for the sole purpose of getting as much mileage as possible out of the moneymaking machine.

Ex-C.I.A agent Bryan Mills (Neeson) is back in Los Angeles after battling his way through Paris and Istanbul, his primary mission to remain in the life of college student daughter Kim (Maggie Grace). Also complicated is his relationship with ex-wife Lenore (Famke Janssen). The exes have obvious chemistry, but she’s stuck in an unhappy marriage with super-rich Stuart (Dougray Scott). After Bryan finds Lenore murdered in his apartment he becomes the prime suspect, pursued by Detective Dotzler (Forest Whitaker). Utilizing those “skills” and some of his ex-agency buddies in an attempt to clear his name and protect is daughter, Mills conducts his own investigation while evading police capture and taking on the Russian Mafia led by caricatured villain Oleg Malankov (Sam Spruell).

In what should be a straightforward revenge/crime thriller, Taken 3 muddies the waters with unnecessarily over-explained plot points and canned twists. There’s so much time devoted to downloading information onto fancy flash drives, reviewing security camera footage, and other procedural boredom that there’s little time for action. There’s nothing wrong with well-crafted cat and mouse suspense, but the script by Luc Besson and Robert Mark Kamen (who have penned all three movies in the series) just goes through the necessary motions and is transparent in its lowbrow aspirations. Neeson and Whitaker can both be great, but they aren’t given nearly as much to work with as, say, Harrison Ford and Tommy Lee Jones in The Fugitive. This film is a hollow shell of that classic.

The few action scenes we get are as uninspired as the rote mystery, director Olivier Megaton mindlessly staging the sequences just to flip some cars and work his way through the production’s cache of blank ammunition. The conflict is also nonsensical. At one point Mills allows himself to be caught and handcuffed, only so he can escape the back of a moving police car and fight with innocent officers while endangering the lives of passing motorists with SUVs and semi-trucks turned into wrecking balls. Despite the illogical carnage, there’s a hilarious adherence to the PG-13 rating, including the cleanest throat slash you’ve ever seen. At one point a character is shot in the head off-screen; when we cut back to medium shot, there’s no blood anywhere.

Taken 3 is incredibly lazy, taking a leisurely stroll through routine frivolity, always giving its protagonist an easy way out. There’s never a sense of real stakes as we wait for inevitable developments that the film treats as mind-blowing catharsis. This series has worn wafer thin, personified by Neeson who here looks more like a bored actor than a weary father or battle-scarred warrior. He’s still got that voice though, so I guess that’s something.