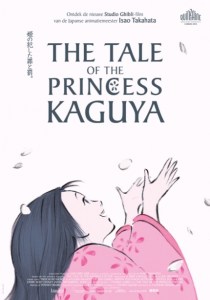 In a world of three-act plots and character arcs, Isao Takahata’s The Tale of Princess Kaguya reminds us that stories don’t have to be neat to be accessible. Studio Ghibli’s final film (for the foreseeable future) is a retelling of a Japanese folktale with the intimacy of a bedtime story and the breadth of an epic. It is illustrated with the utmost care – with creative, balanced compositions eclipsing the need for broad illustrative strokes. Takahata’s latest masterwork doesn’t explain itself, nor is it interested in doing so; its tangents make for a rich tapestry of plaintive beauty and immeasurable wisdom, and what more could we ask for?

The mythic figure of Princess Kaguya began life as a pod-person, discovered inside a bamboo shoot as a tiny, pristine figure, but when she is dropped by the couple who find her, she morphs into an infant. She can’t quite fit in with the village children, who dub her “little bamboo” and tease her when she sings. Seeking a life befitting a princess, her father buys her a palace with the gold he mysteriously discovers in another bamboo shoot.

Kaguya is too noble for the villagers yet too rambunctious for the wealthy, though that doesn’t keep them from molding her into a gentlewoman fit for the Emperor’s court. When she is kept away from her own three-day-long, coming-out banquet, she flies out of her palace in a fit of rage, sheds her silk gowns and runs for the hills.

Every storytelling signal is preparing us for this rupture, but nothing prepares us for it to be so breathtaking. Wistful watercolors transform into jagged charcoals, and Kayuga takes to the street like a bat out of hell. But where we anticipate a triumphant return to the simple life, Kaguya finds her home turf desolate, haunted by the ghosts of her expectations.

These ghosts haunt her throughout the 137 indelible minutes of The Tale of Princess Kaguya, whether on the surface or pushed way down below. The glimpses Kaguya gets of her former life vary in mood but always weigh heavily on her conscience. It’s downright paradoxical that such a visually serene film can be torn by such emotional turmoil.

That The Tale of Princess Kaguya doesn’t fail when it defines itself by its own fragility is remarkable. That it succeeds more than we could’ve expected speaks to the power of a born storyteller without an agenda. Emotional twists come in spades, but they never feel like twists. They’re felt deeply, and their seeds are subtly sown throughout the tapestry of the film so that they can blossom in full on their own terms.