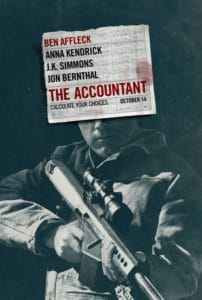 The Accountant has a lot of ideas without a lot of thought to back them up. There’s a ton of information provided in Bill Dubuque’s script, so much so that the film becomes a muddled mix of several different stories. All of the threads are presented as deeply meaningful by director Gavin O’Connor, but the various story elements cannibalize from each other instead of coalescing, messages and thrills lost in the over-serious jumble.

Christian Wolff (Ben Affleck) was diagnosed with high functioning autism as a child and uses his talent for numbers to become a super-accountant. As a number-cruncher, he lives a double life: operating out of a non-descript strip mall office and helping struggling locals with their taxes, he also investigates the money problems of dangerous clients and powerful corporations and settling accounts by any means necessary. Through some unclear means – a recurring problem with the movie, Christian’s referred to a robotics company headed by Lamar Black (John Lithgow), where low level employee Dana (Anna Kendrick) has discovered some accounting discrepancies.

With all of this, and more, going on, The Accountant falters at managing all of the characters. The central premise is an intriguing one, but the movie never quite reconciles the disorder of its main character with his missions, both professional and personal. Christian’s military father opted against traditional treatment for his son, instead choosing to overload his senses to force him to cope with the real world. This includes going through martial arts training in Indonesia for some reason.

What’s never explored is the internal struggle of the man who went through these experiences and now exercises control by balancing budgets and shooting mercenaries in the head – which happens A LOT. He blows on his fingers before he eats or pulls the trigger, he listens to heavy metal and flashes a strobe light in his bedroom every night, but nothing goes beyond the ritual and very little happens to upend his routine. 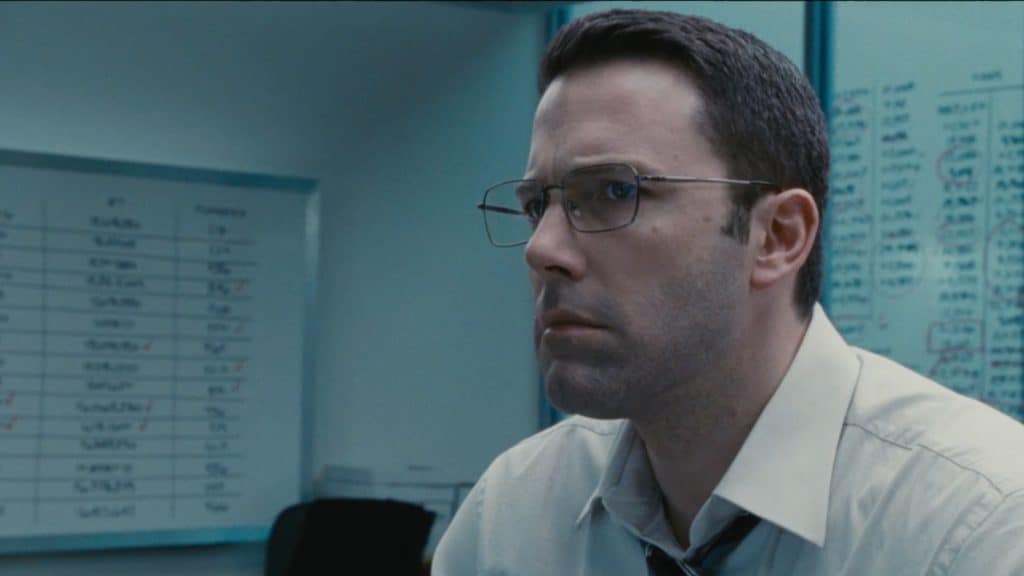 Affleck is appropriately blank, reminiscent of Jason Bourne as a no-nonsense killing machine, and manages to inject some deadpan humor, mostly courtesy of a quasi-courtship of Kendrick’s character. Though it’s somewhat refreshing that she’s not used as a token love interest, the talented actress is wasted. In a movie that’s overwritten, a story she tells Christian succinctly captures themes of being an outsider, craving acceptance, and going to extreme means to get it – the success of that scene owing a lot to her delivery.

As a whole, however, The Accountant is overwrought and doesn’t balance the topics with the plot. Everything is unnecessarily complicated with things half-explained for the sake of mystery. The corporate malfeasance remains murky, the Treasury Department’s role evolves and seemingly contradicts itself, and flashbacks – including one involving Christian’s book-cooking mentor (Jeffrey Tambor) only cloud things further.

When the movie finally gets into Big Reveal mode, the revelations range from terribly obvious (who certain characters are), to the laughably impossible (the behind-the-scenes of Christian’s operation). This is a film that treats a dented thermos like a gravely important object. It’s explained to us why, but the explanation doesn’t make any sense. Nothing here really adds up to anything of substance, or even reasonable coherence.