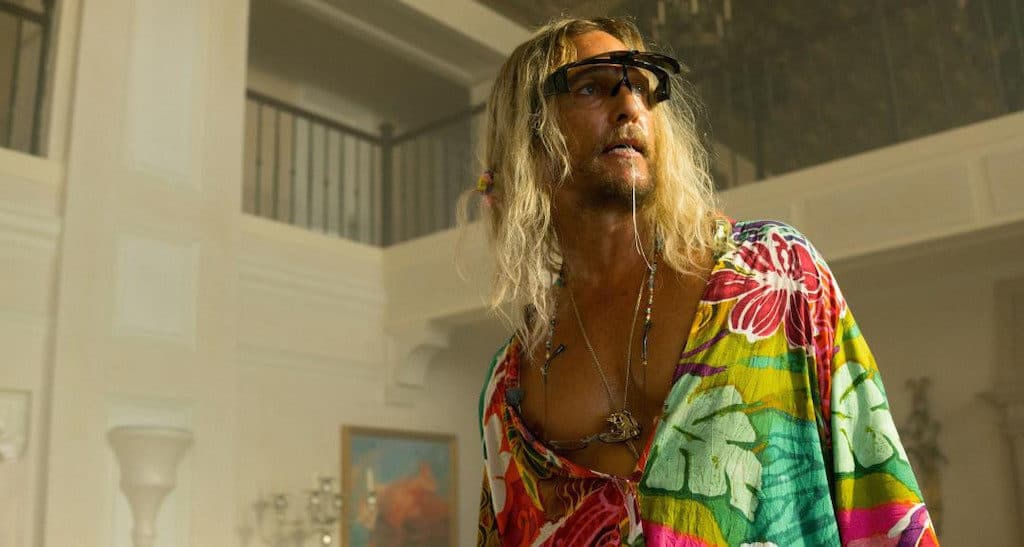 It seems that, for Matthew McConaughey, 2019 is the year of indulgence. Never before in his career have we witnessed two back-to-back performances that so precisely typify the idiosyncrasies of what many would estimate as the actor’s real-life persona.

The first, his staggeringly regrettable turn in Steven Knight’s stinker Serenity (the silly title dressed up here as a fittingly flippant easter-egg for eagle-eyed viewers) was where the uncanny association to McConaughey’s genuine disposition comes across as more of a shameful excuse to take the doomed project rather than an actual asset to any story being told. Now, with the initial teases of McConaughey as the disheveled, fun-loving, chain-smoking, beer-chugging titular Beach Bum, one could justifiably be even more inclined to infer the same to be true here.

It would appear at first blush that 2019 was the year that the Academy-Award-winning career of a once proud and talented thespian finally devolved into self-indulgent slush. And as it pertains to The Beach Bum, there might not be a better phrase to accurately evaluate it than “self-indulgent,” but it is ultimately director Harmony Korine’s glossy proclivity for decadence fused with McConaughey’s commitment to his signature, strung-out wild side that together coalesce into delivering one of the most purely entertaining, raunchy, raucous epics of recent memory.

A creative match made in heaven, the Harmony of the McConaughey/Korine coupling is palpable in virtually every aspect of the film, galvanizing the unhinged comedy and hackneyed story construction with a forward momentum only achievable through its architects being dialed into such an identical frequency.

Excessive and hedonistic in design, Korine’s candy-gloss veneer is a practiced one, The Beach Bum appearing to belong in the same cinematic universe as Spring Breakers, the filmmaker’s calling card film of soupy hysteria and glittery naivete. But in spite of a reinforced facade of anarchic depravity, what distinguishes Korine’s work from the Project X’s of the world is his ability to apply gravity to all the craziness, grounding immaturity with unexpectedly affecting melancholy and sentimentality in key pivot points of the film, always narrowly avoiding overspilling the audience’s tolerance ceiling for superficial nihilism.

When Korine relays the baton to McConaughey, he receives it in stride — inhabiting what seems to be the role that his career has always been leading to — with a wink, a hiccup, a cackle and a hearty dose of himself yet never failing to draw back the curtain to reveal the flesh and bone beneath the larger-than-life exoskeleton of the man known only as Moondog.

A cross somewhere between Saul Silver, The Dude and Jack Sparrow, Moondog is an intellectual turned vagabond who loves nothing more than a good time. He is secretly a profound poet who thrives off of the party lifestyle to stimulate his inner genius, claiming ever so succinctly, “You gotta go low to get high.”

There must be something said about how such a mantra can be seen as more of a metaphoric manifesto — not just for Moondog but for McConaughey and Korine as well. The Beach Bum as a work of art stands to represent the two artists as filmmakers who refuse to accept the notion that you can’t have a good time and still have something to say.

It isn’t a secret that both artists as individuals evidently derive a great deal of personal pleasure from the intoxicating stories they tend to tell, and who wouldn’t enjoy the opportunity to do so if given the chance? But the distinction is that Korine and McConaughey never lose sight of their talent for storytelling amidst their submergence into the tidal wave of euphoria and indulgence, never taking for granted the moral obligations of inspiration found within the decadence.

Moondog’s struggle to find balance between his talent and his indulgences and how both must feed off one another without swallowing either up entirely can be deduced as a motif the creative duo might be keen on fully unpacking for themselves, with it serving as the lone, distinguishable thrust of conflict within a film otherwise disinterested in establishing any traditional or logical narrative structure.

On display here is the notion that not only can you have your cake and eat it too, but that embracing your satisfactions might just be the key to unlocking your greatest possible potential.
Decked out with hilariously memorable supporting performances from Jonah Hill, Snoop Dogg, Zac Effron and Martin Lawrence, The Beach Bum is the best comedy of the year while also earning its stripes as an indie think piece spearheaded by the perfect creative storm of this duo. A film surely to put cynics in their place, it’s everything that those two ever wanted a film like this to be — and that’s just a whole lotta fun.