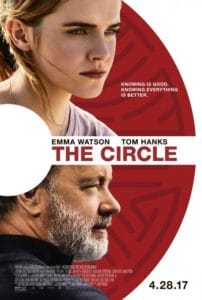 There’s a good movie living somewhere inside The Circle, but it’s been incessantly recut, switched around, shortened in the wrong places and extended in other wrong places, and then all mixed up and served in one perplexingly bland concoction.

Despite the fact that it’s based on a novel, the film feels like it’s been written without an outline, its scenes combined in a disjointed, badly-paced order. The message at the core of the film – a cautionary tale about the increasing ubiquity of digital surveillance in our online age – is agreeable but presented with sloppy, frying-pan-over-the-head obviousness. At its best moments, it’s efficient, but not particularly compelling. At its worst moments, it’s like something out of a particularly egregious Black Mirror spec script.

On paper, the premise sounds interesting enough. A young temp named Mae (Emma Watson) lands a job at The Circle, a globally popular social network that combines your entire online presence into one centralized profile and the pinnacle of Silicon Valley breakthroughs. The company is based out of a massive complex and employs so many people that there’s a strong interior culture all to its own.

The workers live the motto of the site’s CEO, Eamon Bailey (Tom Hanks): “Knowing is good; knowing everything is better.” Privacy is considered an obstacle to overcome, on the path to an open and transparent world. Despite the warnings of her ex-boyfriend Mercer (Ellar Coltrane), and estranged Circle co-founder Ty (John Boyega), Mae is drawn into the project’s potential, working her way up the corporate ladder.

But there are frightening implications at the top. As The Circle continues to grow in influence, the conglomerate’s mission is to accumulate more and more information, surveilling the willing masses worldwide in a quest for total omnipresence.

I’ve always believed if totalitarian levels of surveillance ever emerge, they won’t come from any one nation’s government, but instead from private companies in whose services people voluntarily participate. The fear of being overtaken and watched has been a common fiction device long before the internet, but it seems more palpable now than ever before. That’s why a story like the one told in The Circle is a ripe flashpoint, and it’s understandable why there was a desire to bring Dave Eggers’ novel to the screen. 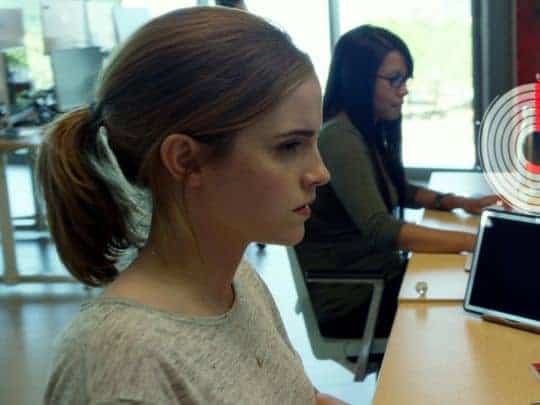 However, timely themes do not automatically bring about worthwhile results. For all its prescient observations and passionately delivered messages, this is a very bad movie. The screenplay, written by Eggers and director James Ponsoldt, is less a flowing narrative than two hours of scenes jammed together. Some are interesting, such as an impromptu high-speed chase, yet most are bizarrely paced or simply inexplicable, such as an ending that seems to have had several minutes of information randomly eliminated so that the movie can end faster.

This is endemic of the writing as a whole – based on strong ideas and proposals but put together in arbitrary, obvious ways. The Circle manages to make it difficult to care when anything happens, because you’re never given enough time to process the important parts. By the time that the ending rolls around, the film is all but pushing you from your seat, through the theater doors and out to the parking lot.

This is not the fault of the actors, who try their best but are limited by the material. Emma Watson’s performance, which is sturdily delivered through her character’s difficult emotional beats, is still held back by the fact that her character has no personality beyond being a scrappy protagonist. Tom Hanks plays a charismatic, confident leader – something he can do but isn’t given an opportunity to embellish. The rest of the cast, which includes Glenne Headley and Bill Paxton as Mae’s parents, are delegated to similar sets of types and information repositories. John Boyega and Ellar Coltrane are brought in as generic voices of reason, spouting off forced, awkward dialogue as best as they can.

Do you remember the rumors that Mark Zuckerberg was considering running for president in 2020? Do you remember how uneasy you felt about the idea of someone who founded a company that collects the personal data of over a billion people becoming the world’s most powerful political figure? Do you remember how it just seemed wrong that this could be a world that isn’t too far away?

Maybe you felt like that for a few minutes and moved on. The Circle wants you to feel that way for two hours, but can’t pull it off because it’s so unevenly written. It’s got a heavy sense of relevant paranoia simmering under the surface, waiting to break through, but is unable to clear through the clutter that keeps getting in the way.