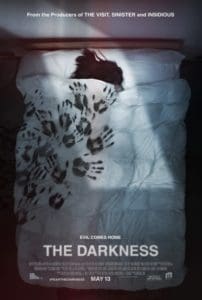 Beginning with its generic title, The Darkness is an entirely unimaginative ghost story. Derivative doesn’t feel like a strong enough word, as horror films of this ilk are becoming increasingly indistinguishable. It seems as though there’s a prototype PG-13 supernatural horror script floating around that has the details filled in Mad Libs-style for every “new” release. This time, the filling-in-the-blanks duty went to director Greg McLean and co-writers Shayne Armstrong and Shane Krause. None of their ideas are new, or interesting, or scary.

The archetypal white, upper middle class family is introduced on a trip to the Grand Canyon. Dad Peter (Kevin Bacon) and mom Bronny (Radha Mitchell) instruct teen daughter Stephanie (Lucy Fry) to watch her autistic brother Michael (David Mazouz) when the kids go off hiking. Stephanie does a pretty terrible job and an unsupervised Michael falls through the ground into an ancient Native American cave. He grabs some sacred rocks and, just like that, another suburban residence is ready to be haunted when the family returns home.

In fairly rapid order, the tropes begin: strange noises, strange smells, doors opening and closing, faucets turning on by themselves, animals acting oddly, and an investigation of a dark attic. The major innovation with these ghosts is that they leave black, ashy handprints around the house; because, obviously, the only thing scarier than an angry ancient spirit is an angry ancient spirit that doesn’t wash its hands. Just think of the germs!

In its standard use of internet searches to immediately find all information pertinent to this brand of haunting, The Darkness hints at an interesting kernel of an idea – these phantoms thrive by using a family’s fears to turn them against each other and, wouldn’t you know it, autistic kids like Michael are perfect gateways. This infighting never happens, though each of the family members has a problem set up. Lucy is bulimic. Peter has a new young, attractive colleague at work and we learn he’s cheated in the past. Mom stocks up on vodka when the weird stuff starts happening. But all of that is just presented and completely dropped. It seems to indicate there were issues with developing the (alleged) script that never got resolved.

Instead of any meat to the drama, we get some standard jump scares, the females taking showers and baths in steamy bathrooms, and portals to another realm being opened with bad CGI. 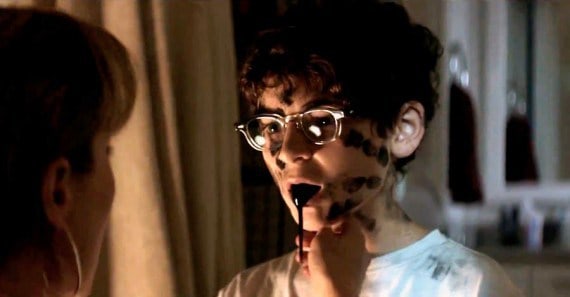 In the killer croc movie Rogue and the Wolf Creek slashers, McLean was able to generate some serious, earned chills, which makes the blandness here all the more baffling. All of the proceedings are presented in the plainest way possible, just checking off the requisite boxes to plow through the unoriginal story. When the inevitable final confrontation of man versus specter occurs, experts (Alma Martinez and Ilza Roasrio, different ethnicities than our white-bread family, of course) are brought in to cleanse the house. Again, there’s absolutely nothing here we haven’t seen before.

Bacon and Mitchell could act their way through this junk in their sleep, and most of the time it feels like they are. Paul Reiser has a few scenes as Bacon’s boss and is equally groggy; perhaps those Mad About You residuals are drying up.

The Darkness is a total snoozer, failing to entertain, excite, or unnerve in the slightest. It plays out before us unceremoniously and then immediately retreats into the dark recesses of our minds.