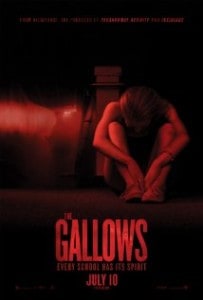 The Gallows is comprised of a trifecta of horror movie lameness. The film’s found footage conceit uses standard tricks to deliver the requisite jump scares, it includes a supernatural element in order to conveniently break the rules of the physical world when needed, and weak third act twists pose as meaningful when they’re really meager. It all adds up to a whole lot of nothing.

First, we’re shown footage from 1993 high school play The Gallows. During the finale, the play’s lead, Charlie Grimille, is tragically hanged in a prop malfunction. 20 years later, the small-town Nebraska school is ready to resurrect the production. Reese (Reese Mishler) quit the football team to take the starring role in hopes of getting close to leading lady Pfeifer (Pfeifer Brown). This angers Reese’s buddy Ryan (Ryan Shoos), who can’t believe his bro is interested in a theater nerd.

Ryan, who’s filming behind-the-scenes action for class credit, comes up with the genius plan to destroy the set to save Reese the embarrassment of performing. With Ryan’s cheerleader girlfriend Cassidy (Cassidy Gifford) in tow, the boys sneak inside the school at night, only to be confronted by Pfeifer. When the doors mysteriously lock and the phones go out, the ghost of Charlie emerges to take out its pent-up rage on the teens.

We’re told Ryan’s footage is evidence in an investigation. On one hand, it appears whatever agency is doing the investigating has refined the footage and employs a talented post-production sound team due to the perfectly synced loud noises whenever anything leaps out of the darkness. On the other, we wonder why the “evidence” has been edited to include necessary plot points. The majority of the first act is spent listening to Ryan bully classmates and make fun of the play. The only conclusion to draw from this evidence is that Ryan is an incredibly annoying jerk – partly by design, sure, but also largely due repetitive scripting and grating line readings. 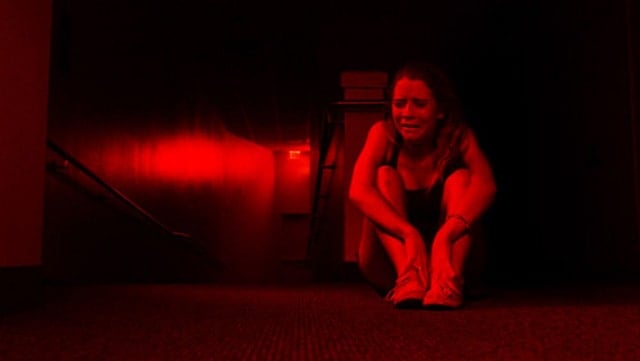 Once the foursome gets trapped in the school, The Gallows plays out pretty much as expected. The dim-witted teens walk down darkened halls, get separated, and refuse to take common sense actions to extract themselves from the situation while waiting to get picked off one-by-one. Instead of ramping up panic as Charlie’s threat reveals itself, the writing-directing team of Travis Cluff and Chris Lofing offers up tedium. Ryan’s cameras (including his phone) pan back and forth in the darkness as the teens narrate exactly what is happening and what they’re going to do next. When the picture changes to a greenish tint, Ryan helpfully puts the camera on himself and gleefully exclaims, “Night vision app!” Thanks, dude.

It’s hard to believe that Cluff and Lofing haven been working on their feature for a few years, the result of their ongoing efforts being so lackluster. Clichés are plentiful and are handled with sub-par execution. It’s so bad that one cliché undoes the previous one – for example, if Charlie is as omnipresent as the film suggests, what’s the point of the entire belabored production that leads up to the big twists? Who’s going to care, anyway? Certainly not us.

There is precisely one moment of semi-effective suspense when Charlie emerges from the shadows behind his prey, the target then leaning towards the camera and obstructing the stalker from our view. The tension is fleeting, however, with over-emoting and another impossibly loud sound cue zapping the in-the-moment effect. This wholly derivative chiller does nothing unique with its recycled building blocks, leaving the familiar standards – terrible acting, contrived backstory, and gotcha moments – exposed for what they are.