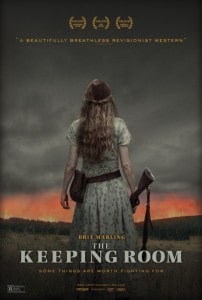 A quote attributed to William Tecumseh Sherman prefaces the limited action of The Keeping Room – a female-driven, Civil War set survival – stating that “war is cruelty” with no hope of reform. While the overall action may be limited, the cruelty of which Sherman speaks lingers and looms in every second of every frame. It’s a sentiment echoed later on by Sam Worthington’s character, one of the two Yankee scouts bringing the quote to life through their ceaseless procession of destruction, operating only in configurations of three functioning modes – drinking, killing, and raping.

Set in the South – desolate in population, plentiful in beauty – with the surrounding woodlands of splendor the perfect backdrop for juxtaposition of the cruelty and bloodshed that will inevitably dot the landscape, three women attempt to eke out an existence on their expansive property in land devoid of material goods and men. That is, until two broadly drawn soldiers of villainy (played by Worthington and Kyle Soller) come to their door ready to war with their eyes set on pillaging.

Those aspirations are halted, however, through the defensive strategies of sisters Augusta and Louise (played by Brit Marling and Hailee Steinfeld, respectively), and a former slave, Mad (Muna Otaru). All three women occupy different personalities in the group, all of which provide fantastic performances in varying degrees.

Most of the praise will be directed towards Marling (all of it deserving) as she portrays a swirling mix of distress, longing and resolve, easily maneuvering between these states, usually with a musket firmly in-hand. But, let us not overlook Otaru, a true driving force delivering a performance of equal strength that perfectly complements Marling’s sterling turn. The one does not exist without the other. 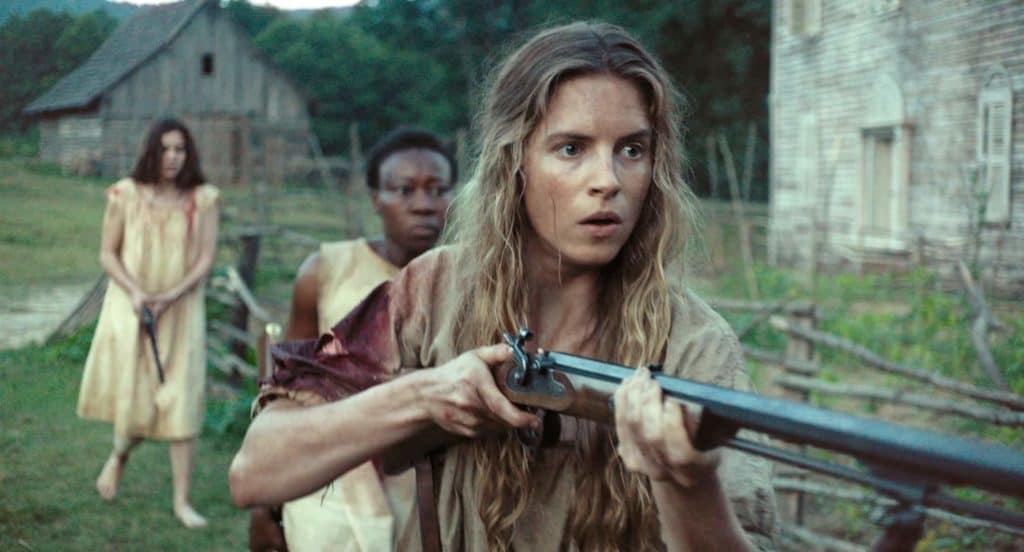 Unabashedly simple in plot and economical in its developments, Barber ably translates the tension – produced by Julia Hart’s taut, spartan script – effectively with the help of Martin Ruhe’s cinematography and the performances from all those involved. Only occasionally does Barber run some of the tension-building sequences well past the threshold and into runtime-padding territory. A minor grievance soothed by Ruhe’s lensing, a wonderful display of space, fully utilizing it to convey the isolation of their predicament coupled with an exquisite use of light and shadow.

A trio of women ascending a spiral staircase, lit exclusively by the flickering lanternlight held in hand, light refracted by the glass, dancing about the barren walls; a down-angled overhead of converging soldiers crossing the acreage of a house aflame; stunning scenes of beauty strewn about the cruelty and death providing the necessary cinematic support to an otherwise borderline-redundant survival narrative.