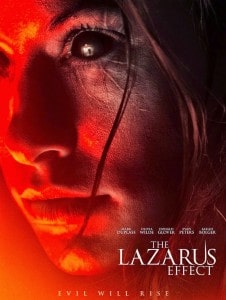 How do you create a follow-up to the rightfully acclaimed documentary Jiro Dreams of Sushi? If you’re director David Gelb, it’s with cold-fish horror thriller, The Lazarus Effect. The film posits some interesting, if unoriginal, questions and then quickly devolves into a bland amalgam of spurious science and benign, telegraphed “BOO!” moments that fit neatly within the PG-13 aesthetic.

Scientists and long-engaged couple Frank (Mark Duplass) and Zoe (Olivia Wilde) are conducting experiments they hope will lead to revolutionary medical advancements. They’re attempting to develop a serum that will allow doctors to temporarily sustain life after death, giving them more time to treat fatal maladies. After three years of work, there’s finally a breakthrough when a dead dog is resuscitated.

Bought out and shut down by a pharmaceutical conglomerate, the research crew – which also includes tech whiz Niko (Donald Glover), genius stoner Clay (Evan Peters) and documentarian Eva (Sarah Bolger) – breaks into the lab to record and verify that their method works. Zoe is electrocuted, and a frantic Frank leads the charge to bring his partner back from the dead. The Zoe that returns is very different from the recently deceased researcher.

Of course we know when scientists play God in the movies, it typically doesn’t turn out well (see Frankenstein, Flatliners, Re-Animator, et al.). The Lazarus Effect brings nothing new to the morgue table. The first act shows potential, taking time to set up character relationships and focusing on the journey of scientific discovery that ignores any pesky moral implications.

Frank is only concerned with empirical data, while Zoe believes science can co-exist with spirituality. Just in case you can’t glean this from the semi-intelligent mechanical conversations, she wears a prominent gold cross around her neck. Niko pines for Zoe, but ultimately his unrequited love is just a prop like Clay’s ever-present e-cigarette or Eva’s camera. 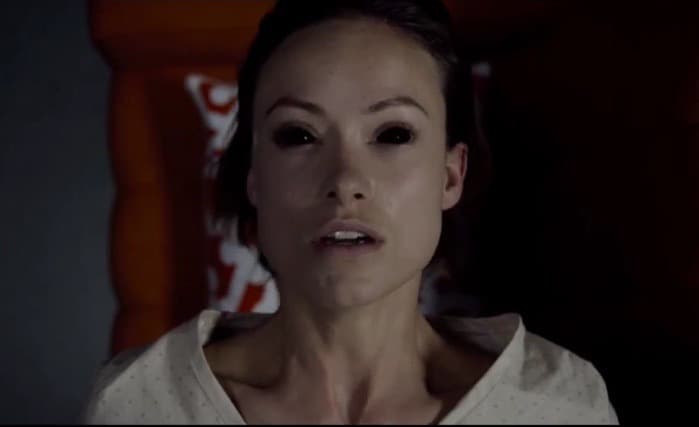 Once Rocky the Dog springs back to life, any of the weighty hypotheticals are left for dead. With little thought, the brilliant scientists take the mutt home, despite curious facts. His cataracts are cured; he refuses to eat; his brain activity is off the charts; and he alternates between docile and (unconvincingly) hostile. You can almost sense the dog trainer just off-screen giving the cue to get the trained pooch to bare his teeth.

Armed with that helpful foreshadowing, it’s fairly clear everything will go to hell when Zoe is brought back, and the movie merely plays out those standard expectations. There’s a half-hearted attempt to connect a traumatic event from Zoe’s past to her new, unfamiliar state of being, though it only resonates as a blunt metaphor for a personal hell that’s never fully explored.

There’s also no thought given to the nature of the monster. Being brought back wasn’t Zoe’s choice, but she’s painted as a villain in the broadest of strokes. The man responsible for her creation is just another victim to stalk in the grey underground lab that’s as drab in its look as the movie is in its technique.

With a seemingly unlimited supply of powers – telekinesis, mindreading, levitation and super strength among them – newly evil Zoe’s weapon of choice is turning the lights off only so she can appear out of nowhere for a jump scare. Gelb is constantly using a strobe effect to try and add tension and surprise to these scenes, but anyone who’s seen any generic thriller always knows what’s coming.