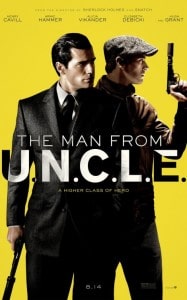 With director Guy Ritchie at the helm, it’s no surprise that The Man from U.N.CL.E. has style to burn. What is a little surprising, however, is how effectively the slick production sustains momentum despite two stiff lead actors who basically serve as hangers for period clothing and mouthpieces for the affected, double entendre-laced dialogue of Ritchie and co-scribe Lionel Wigram.

The film operates in a sweet spot where strutting fun brushes up against a too-cool-for-school attitude without crossing the line into blatant showiness. Briskly paced, beautifully shot, and tightly plotted while retaining all of the requisite twistiness of an espionage adventure, The Man from U.N.C.L.E. is an enjoyable romp.

Talented thief turned C.I.A. operative Napoleon Solo (Henry Cavill) is sent to recover Gaby (Alicia Vikander) from East Berlin. Also on her, and Napoleon’s, trail is Soviet operative Illya Kuryakin (Armie Hammer). Gaby’s father, a nuclear scientist, has gone missing and is believed to be involved in the uranium-enrichment plans of Victoria (Elizabeth Debicki). The Americans and Soviets want to use the girl to find her father, protect their countries from doom, and secure the upper hand in the Cold War. After their initial adversarial encounter, Solo and Kuryakin are forced by their respective governments to team up to neutralize the pressing nuclear threat.

All of this is very familiar, and thankfully Ritchie realizes this and assaults our senses rather than our intelligence. Exposition is parsed out succinctly when needed and we’re spared belabored backstories and explanations of character motivations. We’re dropped right into Solo’s East Berlin operation to acquire Gaby and as the mission unfolds and Kuryakin appears, we’re given flashes of briefings that tell us all we need to know before being thrust back into the action and the spy games. 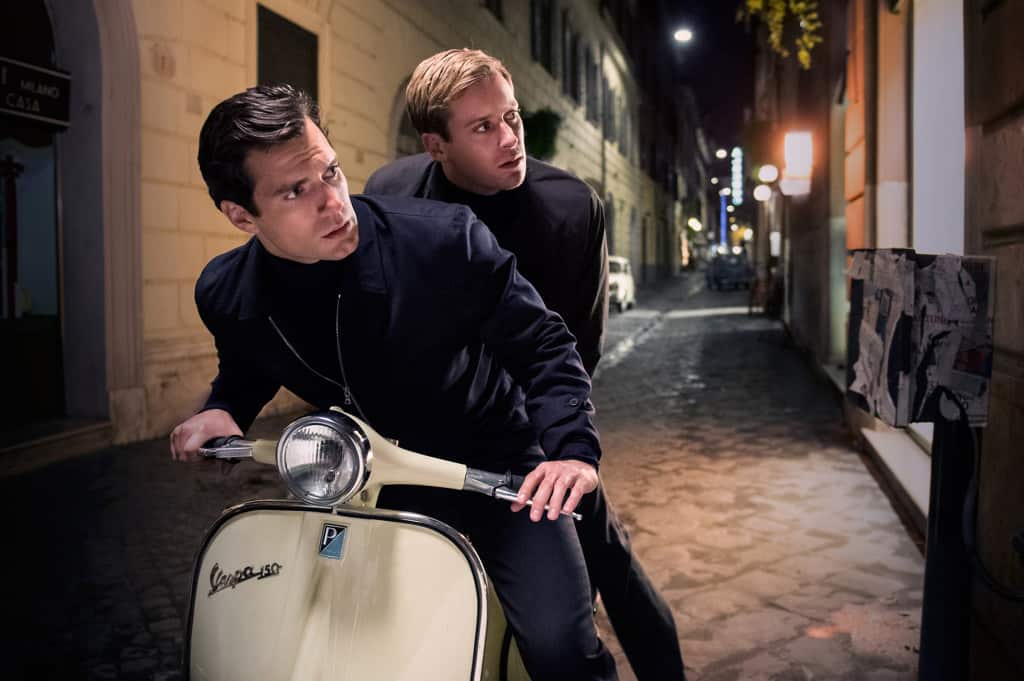 Instead of being dragged through trope after trope, we’re pulled along like we’re in on the caper and can just sit back and enjoy the ride. Playing like homage to ‘60s-era spy films while also cultivating the era’s distinctive look and air of refinement, The Man from U.N.C.L.E. captures a swashbuckling spy attitude that doesn’t come off as posturing.

With raw energy driving the film forward, it doesn’t really matter that Cavill and Hammer lack charisma – partly by design with their understated suaveness and tight-jawed ball of pent-up rage, respectively, and they work as cogs in the fast-moving conspiracy. More personality is present with Vikander and Debicki as damsel and villainess, each of them excelling at being appropriately hammy. Satellite characters, including those played by Jared Harris and Hugh Grant, drop into the story neatly without gumming up the works.

Glossy techniques like rapid editing, visually or aurally withholding information and then jumping back to fill in the details, judicious use of CGI to enhance the low-fi time period, and split screens are seemingly ever-present, but don’t get in the way of the narrative. What’s left out of the action is just as important. We’ve seen countless shootouts and raids on villain’s lairs, and Richie saves us from another by zipping through the boring necessity with quick cuts and multiple panes of action on the screen, saving more time for a virtuoso chase sequence with overhead pans that clearly communicate the architecture of the pursuit.

Cheeky without being pretentious and cleverly staged without feeling disingenuous, The Man from U.N.C.L.E. strikes the right balance of retro-chic fun with contemporary technical swagger.