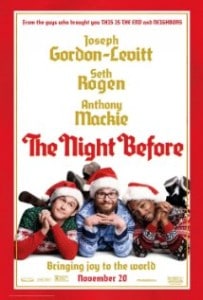 Over the past half-decade the R-rated comedy has mostly languished in a post-Hangover hangover, having a difficult time finding the balance between being crass and convivial. Pre and post the 2009 dirty-minded line of demarcation, the producing team of Seth Rogen and Evan Goldberg (Pineapple Express, Superbad, This is the End, Neighbors) has remained consistent with their brand of approachable insolence. The Night Before is another success, examining the state of suspended adolescence in the face of impending adulthood with honesty and observant chutzpah.

Combining the sentiment of a holiday movie with a barrage of bad behavior has the potential to get real tacky real quick, but director/co-writer Jonathan Levine and a talented, likable cast find the sweetness in both without going overboard on either. It really helps that the dudes at the center of the story, as well as several supporting characters, are relatable without being mere props through which the expletives flow. There are a bunch of cameos to take care of that and, thankfully, they’re often quite funny, too. Even Miley Cyrus.

Joseph-Gordon Levitt plays Ethan, who lost his parents in a car accident on Christmas Eve when he was in his late teens. For the past 14 years he’s spent the holiday with buddies Isaac (Rogen) and Chris (Anthony Mackie), going crazy and searching for entrance into the annual, ultra-exclusive Nutcracka Ball party. This year is the last for the trio’s tradition, as Isaac is about to become a dad and Chris’ NFL career has taken off. Coming across three tickets to the Nutcracka, Ethan and pals are set up to go out with a bang. 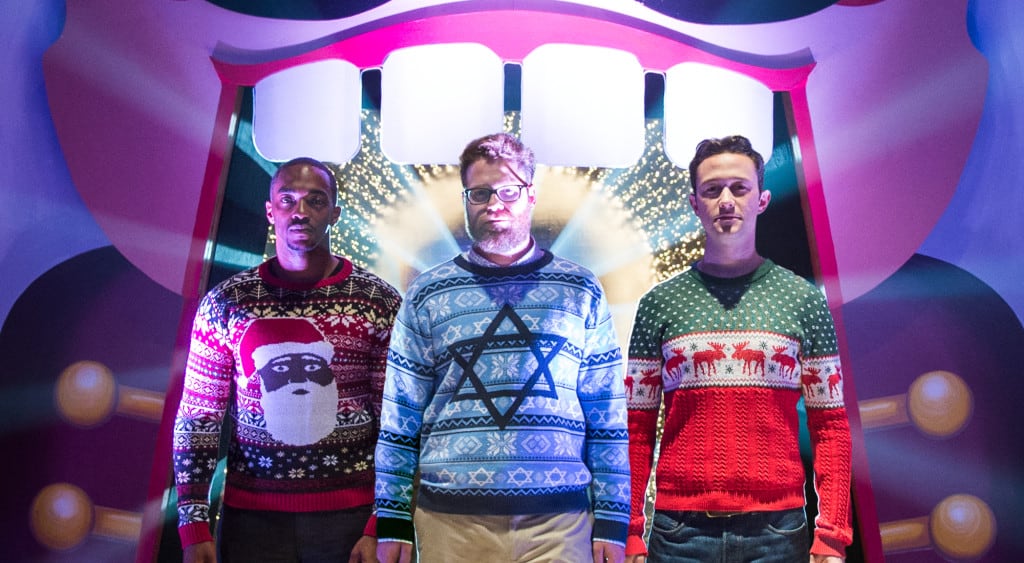 It’s a simple setup that becomes far richer by the entanglements of the three pals. As if Ethan’s tragedy weren’t enough, his hang-ups cost him his relationship with Diana (Lizzy Caplan). Isaac is a seemingly in-control expectant father, but his (understandable) fears come out after consuming a cocktail of drugs lovingly given to him by his wife (Jillian Bell) to enjoy his night on the town. Chris is obsessed with his expanding social media popularity and pleasing his famous football brethren, blocking out that his newfound success on the field has come by way of steroids.

There’s a lot going on here, though the defined character traits aren’t belabored and fit comfortably into the well-paced tomfoolery. The objective of this night is to have fun after all, and they do; even if Isaac records a scathing, drug-induced video deriding his unborn child, or if he holds up a dick pic in the background of one of Chris’ Instagram videos. If they come to grips with growing out of their ritual and learn a little something along the way, well then that’s fine, too.

The movie also has fun with stereotypical Yuletide themes and includes several references to holiday favorites – Home Alone and Die Hard chief among them. It opens with a clever, dirty fairytale-like narration and speaks of Christmas miracles, and even has visions of Christmas past and present by way of Magical Weed supplied by drug dealer Mr. Green (Michael Shannon, who is extremely, effortless funny without breaking his signature intensity). It may sound like a bit much, but the whimsy and the reality harmonize just fine. The weirdness just adds another layer to the charm.