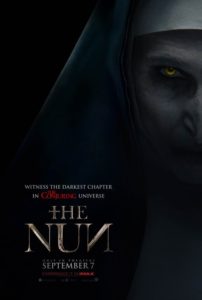 The portrait of the fiendish nun in The Conjuring 2 was scary because of its simplicity. The cold stare through blacked-out eyes is chilling; the minimalism of the two-toned demonic face matches the habit that frames it, allowing us to easily project our fears.

Now, just like the creepy doll in Annabelle, the infernal character gets its own spinoff in the expanding Conjuring cinematic universe (CCU?) in The Nun. And, just like Annabelle (but unlike Annabelle: Creation which works pretty well), The Nun has difficulty fleshing out a standalone story or generating serious shocks. The generic, longwinded backstory ascribed to the monster diminishes its power, and the imposing figure barely feels like a threat as it remains largely sidelined in its own story, only appearing for some CGI-aided face contortions and repetitive jump scares. The effective steely gaze of Bonnie Aarons, who plays the demon Valek in its nun form, gets wiped away by unnaturally large, pointed-tooth roars. 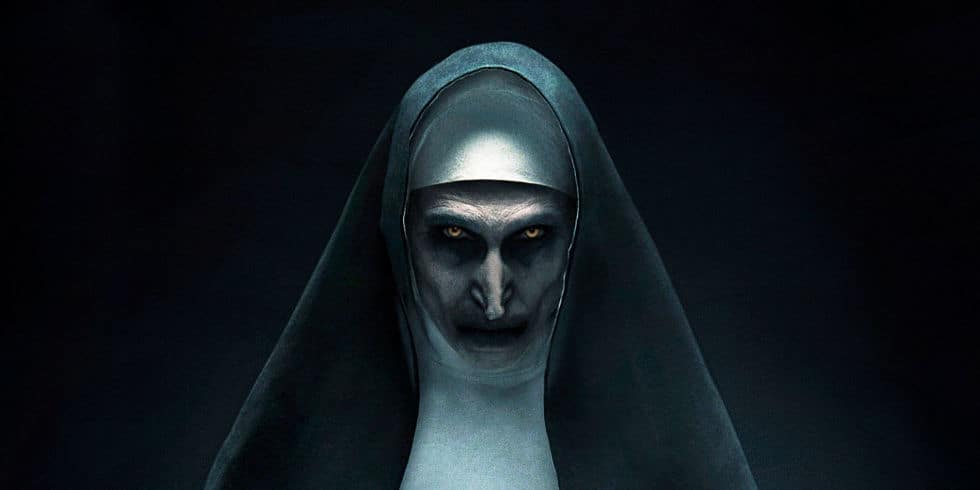 Set in 1952 and taking place in and around a spooky hilltop abbey fit for Dracula if it weren’t for all those crosses everywhere, the film aims for a Hammer-horror-type atmosphere. While some of the shots utilizing harsh lighting through fog and surrounding forest are evocative, there’s nothing in the story or the construction of the jolts that elevates the dreadful environment to true terror or pulls us into the mystery. I would wager that The Nun sets a record for largest percentage of runtime spent with characters walking through darkness carrying a lantern/candle/torch and waiting for something to jump out at them. Slow pans in one direction coming back to reveal a dark figure lurking may work once or twice, but that trick is played out quickly.

In the eerie Romanian abbey, a nun (not THE Nun) is pursued by an evil entity (probably THE Nun, and of course down a dark corridor) before leaping from a window and hanging herself. The Vatican dispatches Father Burke (Demián Bichir) to investigate the unnatural death, assigning him young nun Sister Irene (Taissa Farmiga, sister of Conjuring star Vera) as an assistant for reasons that are (sort of, lazily) made clear as the story progresses. Local villager Frenchie (Jonas Bloquet), who discovered the body, acts as their guide. 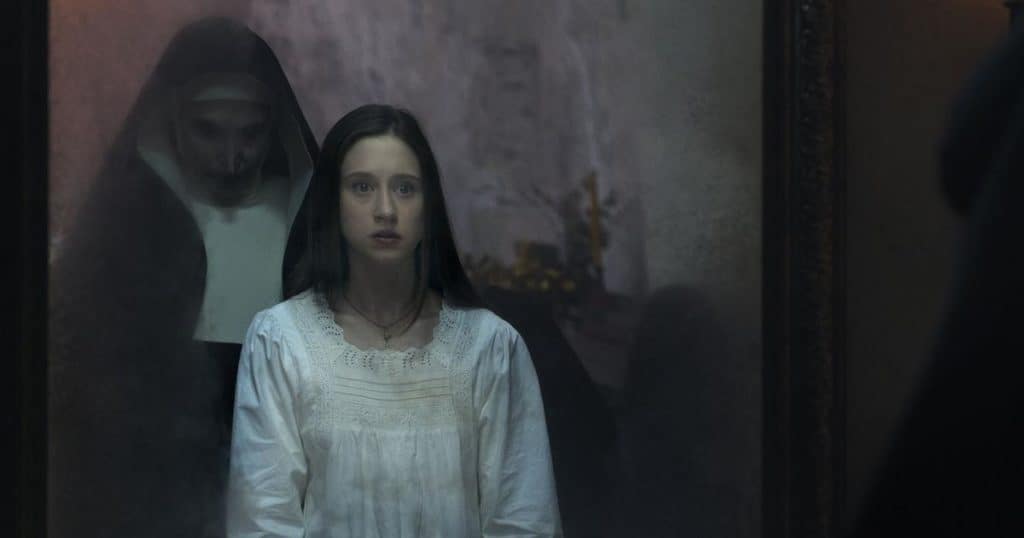 Director Corin Hardy pushes the gore further than any CCU film thus far, peppering the supernatural tale with blood-dripping bodies and other interesting grotesqueries here and there, but it’s not enough to liven the predictable tale that’s otherwise filled with broad depictions of twisted religious iconography. A field of crosses, fiery crosses turned upside down, a headless crucifix, crying statues and pentagrams do little to set the mood, while the mélange of other mismatched frights offer few gasps. We get ghostly nuns, zombie nuns, faceless nuns and resident normal(?) nuns in addition to THE Nun, none of them all that fearsome or purposeful, aside from relaying a bunch of exposition. 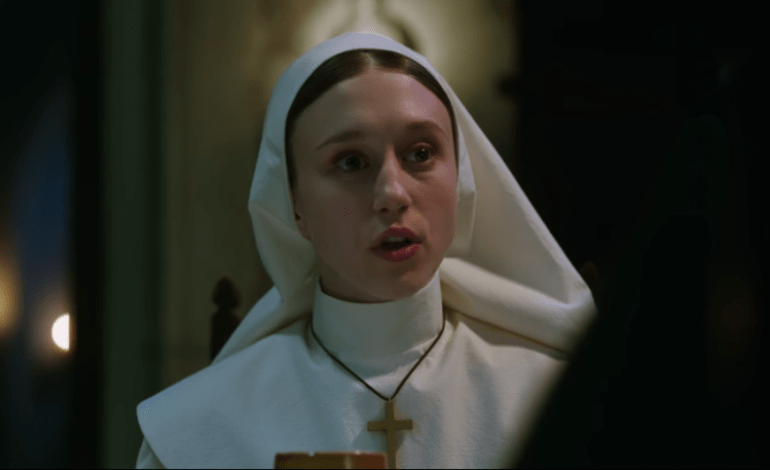 We’re told so much, though never really get a sense of how all of the backstory meshes with the imagery. The screenplay is simultaneously heavy-handed and disjointed, desperately grasping for meaning and failing to sustain momentum as it builds to the inevitable final confrontation of good and evil. There are inelegant attempts to attach the awakened evil in the cloister to WWII – the sins of man unleashing ungodly hell – and stabs at comic relief through Frenchie that don’t work. All other performances are flat, the only rise coming during a distressing, yet random, scene where Father Burke is buried alive. There’s some new verve added to the familiar scenario thanks largely to the sound design, which is the standout element throughout the film.

Nothing that’s built around the Nun’s haunting glare fully ignites the nightmare fuel inherent in the image. The strain to construct a story is evident with ties to The Conjuring that feel shallow and silly rather than revelatory or alarming. Valek is much scarier as a painting hanging in the background than it is in The Nun.