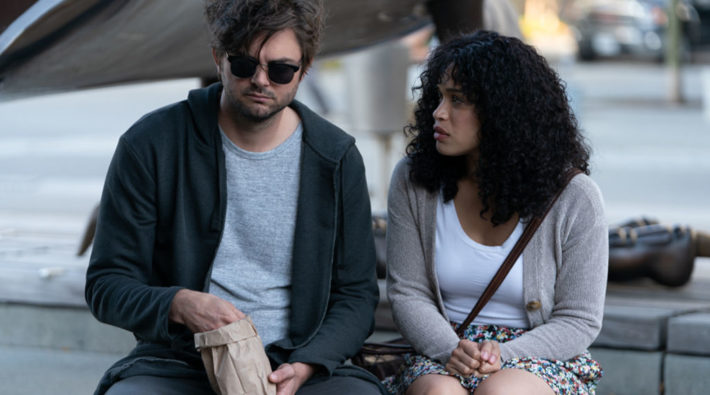 The universe of The Right One exists in a fantasy world, steeped in a fog of a mental health disorder that only gets thicker as it progresses. At first Godfrey (Nick Thune), known as G Money by his coworkers, appears eccentric. He’s the type who shows up to a business casual job with a Mohawk haircut, brightly colored clothes and fake tattoo sleeves. And despite the strange office getup, he’s the company’s top seller.

The eccentricity is taken to the next level at an art opening where we find Godfrey in a suit,  pretentiously discussing the image in front of him. A few minutes later Godfrey can be found in another room at that same event, making an impassioned speech, his hair  disheveled and now wearing rose-colored glasses and a different outfit.

Sara (Cleopatra Coleman), a writer of romance novels, attends the event at the advice of her aggressive and too personally involved literary agent, Kelly (Iliza Shlesinger), for inspiration and takes notice of Godfrey two times at the event, each time seeming to resemble someone different. Sara notices him again when she sees him street performing the next day.

Cowboy hat atop his head, guitar in hand, he’s now calling himself “Cowboy Cody,” and upon approaching him, she says she saw him at the art gallery the previous night. When he denies being there, suddenly Godfrey doesn’t seem as eccentric as he does mentally unstable, as we’ve now seen him as four different “people.” And this notion is further confirmed when Sara goes to an open mic and sees him perform as a woman from Iowa City in a dress and wig.

Sara though doesn’t see him like the viewer does and is intrigued, and after a night out with him moonlighting as yet another identity, DJ Ketamine, her intrigue turns to inspiration as she thinks she’s found the source material for the third book of her series. Although romance briefly blossoms, the book drives a wedge between she and Godfrey that only disappeates when they both realize they need one another. Sara realizes that writing about him has brought her in touch with her self identity, while Godfrey realizes what we’ve known all along: he needs actual help if he’s going to continue functioning in the world.

The question of whether people can exist with multiple personas without anyone noticing should be answered with a resounding “no,” as hopefully enough people care to help, but clearly that’s not the case here. That’s why a wall exists between the film and the viewers that makes it hard to get into. There’s reason to worry about Godfrey and his mental state from the third or fourth costume change, but it seems others let him inhabit these extreme personas without any consequence.

His foster brother, Shad (M.J. Kokolis), eventually explains to Sara that all these personalities are part of Godfrey, but he just doesn’t want to be “the real Godfrey,” and all this started in his childhood. Godfrey’s only forced to change when he could lose his opportunity to volunteer with children, yet it’s strange that his disorder didn’t impact his life before now. As he’s very public with his different personas, the fact that none of his coworkers have seen these other identities, or that the parents of the children he volunteers with are just now discovering this side to him, is highly improbable. But because the characters don’t notice the gravity of what’s happening, why should we? It’s hard to invest in a reality that doesn’t appear that real to begin with.

The idea that Godfrey’s entire mental state stems from childhood trauma, frankly, is generic, as it easily explains everything and looks like someone did some shallow Googling into Dissociative Identity Disorder. And the source of his trauma is not explained until way late in the film, and even then it’s hamfisted in with a bunch of dialogue, a trend that feels repetitive in this movie.

Maybe The Right One was meant for a different time. Heavy dialogue, sexist jokes and references in the workplace, failing to address mental health issues: this film checks all of those outdated boxes, and that’s the problem. Perhaps 10 or 20 years ago, this film would’ve worked, but in 2021, it just doesn’t.