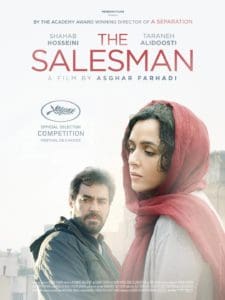 Regarding the films of Iranian writer/director Asghar Farhadi there is a certain reputation that precedes his work; one thinks of skillfully-crafted drama that is well thought out, that can be interpreted and misinterpreted depending on a particular point of view; and, that is what Farhadi delivers time and time again, like he does with his latest, The Salesman, thus reiterating himself as one of the finest purveyors of domestic drama working in cinema today.

While it may not rank amongst his best, it does fit nicely alongside his previous work as yet another complicated entanglement of strained communication and withheld information resulting in prevailing actions being based on an incomplete understanding of the circumstances, the full extent of actions and intentions remain in the murk of speculation while only those involved are privy to the truth. And then, even then, the respective truths of their experiences possess spaces for inconsistencies, differences with the sequencing of events, the intentions behind those actions and the severity of any perceived damages or harm.

Much of the film’s success is blueprinted in the screenplay but it is the actors, as per usual with a Farhadi production, that elevate the material. Not just Taraneh Alidoosti and Shahab Hosseini, either, although they are the focal points and their performances are afforded actions with much greater emotional weight, but also the complementary portrayals provided the supporting cast like Babak Karimi and Farid Sajjadi Hosseini, just to name a few. Every member of the cast has the composure and demeanor of a veteran actor delivering a peak performance, in unison. 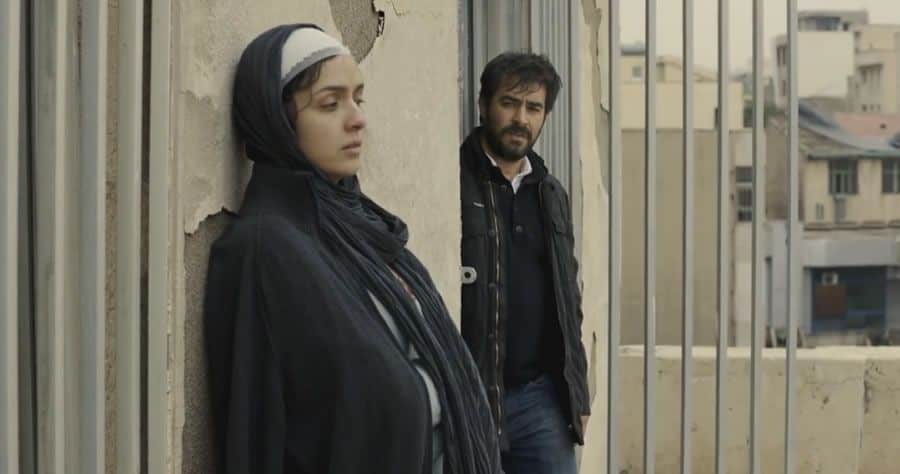 Admittedly, my knowledge and comprehension of Iranian customs and its societal expectations/roles is borderline non-existent; so there remains a level of nuance to the proceedings that is relatively steeped in oblivion, in my case. It amazes me that Farhadi is able to construct these narratives with layers of nuance, all of which affecting, yet one crucial and important layer can continue untouched. My appreciation and admiration for Farhadi’s work is based on an incomplete understanding of its complexities.

With The Salesman, Farhadi seems to be examining the idea of reputations and their effects on others; specifically, it is the unsavory reputation (gleaned through gossip, never verified) of a previous tenant that ultimately begins the process of destroying the lives of a young couple forced to relocate after their apartment building suffers structural damage. The young couple, Rana (Alidoosti) and Emad (Hosseini), must deal with the aftermath of an altercation with one of the previous tenant’s acquaintances which leads the husband blindly down the path of justice. All other aspects of his life suffer while he prioritizes this quest of balancing the scales.

So much so that his hindsight is laden with vengeance, a thirst of right a wrong and learn the truth, yet the marginal instances wherein his vision is focused forward – on how to comfort and console his wife, the ways in which he can help her heal – it is obstructed by a fog of frustration while his sights of justice and revenge are clear and concise. If only the amount of thought that went into his justice-seeking endeavors were, in turn, realigned to the safety and health of his loving wife. In a sense, Emad is listening attentively to every word spoken – the tone, perceived meanings, et al. – by every person involved, directly and indirectly, except for the one that should matter most – his wife.

Regardless of the film’s examination of Iranian culture, it does not seem to be reliant upon that specific examination. It works well even if you, like me, find yourself ignorant to the particulars of this culture and its customs; and much of that can be attributed to the highly-competent filmmaking from Farhadi, who seems to have an uncanny understanding of human behavior that enables him to dissect those behaviors in such a thoughtful, respectful manner. There are plenty of complex issues and actions to contemplate, plenty of starting points to facilitate dialogue, and Farhadi initiates all of this with compassion and grace.