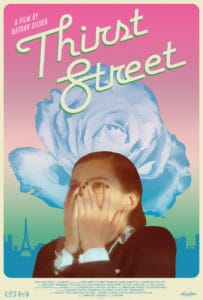 Grief and loss can push people to extremes, and Nathan Silver’s Thirst Street, co-written with C. Mason Wells, showcases a psychological character study of a flight attendant named Gina (played by Lindsay Burdge) who decides to make a new life for herself in Paris. A one-night stand with bartender Jérôme (Damien Bonnard) precipitates this decision, and her adoration for him leads to some undesirable outcomes.

At the heart of Thirst Street is a bold performance from Burdge, portraying a woman losing her grip with reality, incrementally. Innocently at first, she is dreaming of a perfect love, but then, with her feelings going unreciprocated and the pairing not moving has quickly as she’d hoped, her dreams become more vivid. These dreams reincarnate into delusions, and she pushes her front foot forward into fantasyland, abandoning the toe-dipping of willing dreams into existence for a full-fledged commitment to creating and controlling her own reality.

Burdge, not unknown for her ability to play characters breaking free from societal norms, may be at her best here as a slightly awkward tourist-now-tenant soaked in alacrity toward her new life. She is somehow able to continually embody a host of opposites at once – tentative and enthusiastic, innocent and dangerous, dejected and undeterred.

It’s a nimble performance, displayed again and again within her facial expressions, where she is able to map out her character’s descent, each smile’s meaning, each expression providing character development more effectively than any amount of forced exposition could.

Much of Thirst Street’s dialogue is an awkward, stumbling stroll through basic societal niceties and small talk. Granted, the intentional language barriers create this and justify its structure, but the simple fact of experiencing these stammering exchanges, ripe with umms and ahhs and uncomfortable silences, is less than ideal, considering that, between those umms and ahhs, is nothing but rudimentary language ushering along a basic, somewhat conventional, narrative.

Coupled with the dialogue is a voiceover narration provided by Anjelica Huston, which is, at first, a novel adornment, but its implementation becomes sporadic over time – which, in turn, transforms that novelty into an intrusion, an extraneous trinket providing little value, intermittently pinned to a rather flat narrative. It lacks a consistent pace, with long stretches of the film having no narration to be found until it crops up unexpectedly and unnecessarily, perhaps as a reminder that everything up until that point has been fine without its sudden inclusion of informing you of what you are about to experience.

Not that all of these pieces are less than or out-and-out detriments to the overall construct of Thirst Street, it is just that they are something just as unappealing: they are comprehensively adequate, thoroughly serviceable in their employ with only the cinematography of Sean Price Williams and the performance of Lindsay Burdge to supplement and elevate the rest of the satisfactory aspects as a whole. All in all, Thirst Street is neither a bad film nor a great one, but rather an average one that falls short of being something greater.

As for Sean Price Williams’ cinematography, this is where the film jumps out from the shadows of adequacy by pairing the mild-thriller visuals with the dimly lit nightlife of Paris wonderfully. Neons and lowlight spaces constitute much of the proceedings’ settings, and Williams capitalizes with close-ups bathed in that light and with frames pulling in and out in order to register intrigue. One sequence in particular sees Burdge and Bonnard staging a dance number in the night with luminescent neon railings flanking the dancing romantics in the fog of a perfect dream.