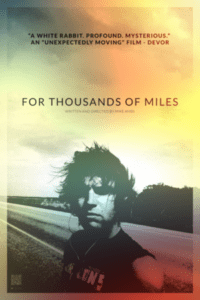 Film is available for viewing at the bottom of this review.

Documenting the cycling traversing of America by Larry McKurtis is the main focus of Mike Ambs’s debut film, For Thousands of Miles. It also has a number of mini-docs folded into its structure; brief tangential documentaries that touch upon topics such as Gertrude Ederle (the first woman to swim across the English Channel), famed climber Donald Forest, or Thomas Stevens (the first person to cycle across the globe); drawing parallels and connections back to Larry McKurtis.

Laid on top of these documentaries are the director’s own words provided via voiceover narration, disseminating facts on the various topics while also capturing the overall feel of McKurtis’s trip. It is another of these “blurring the line between documentary and fiction” types, yet with For Thousands of Miles that border is barely even established. It is not so much a blurring of the two but more so an example of a clearly-defined documentary that happens to have smudges of fiction on its surface; a fiction that is loosely nonfiction born out of the experiences of McKurtis and afforded creative license.

All throughout, in directing and writing, Ambs tries to match the beauty of the scenery with fluid camera movements to imbue grace and a voiceover that is sobering in its solemnity (complemented by the score from Eluvium). The cinematography does well in keeping the somewhat redundant imagery from growing stale. The camera is patient, usually fixed on our cyclist but occasionally breaking free; panning away from the open road, as if rubbernecking to witness the beauty of the landscape, inserting the viewer in the trip but also capturing the sights for McKurtis himself as his focus is pin-pointed on the unfurling white line before him.

The accompanying voiceover does sporadically tip the needle towards cumbersome. At times an unrelenting adornment of ornate play-by-play delivered in monotone that can be misconstrued as indifference when the aim is added poignancy. Not to say that Ambs does not project a certain sense of profundity to the proceedings because he does. It’s just that his poetic commentary can be distracting from time to time considering the inherent impact of the imagery on display provides much more than any particular set of words could. That is not to take away from his writing in general just an observation regarding his mode of delivery.

The prose that adorns this cross-country trek is highly descriptive, both in terms of evoking the atmosphere of the surroundings as well as McKurtis’s mental state throughout the endeavor. It is poetic yet informative as Ambs articulates the experiences of Larry’s journey while intermittently detouring into historical reflections; ruminating about a road in the Midwest will lead to a cursory overview of said road’s construction or the histories of Forest and Stevens. All supplemented with archival footage.

However, the aim of the prose is far bigger than merely attaching an eloquent poeticism to the somewhat redundant activities of Larry McKurtis: a solitary man biking across the country. There seems to be an intention of grandeur, of elevating the menial, mechanical task of converting one’s legs into pistons to propel one’s self across great stretches of empty road in search of an undefined trophy. A trophy that never materializes at the end of his journey. As the film says, “part of him had been expecting something profound to be waiting at the ocean, but, in many ways, it never came.”

With that in mind, it seems as though Ambs is attempting to retroactively festoon this particular endeavor with insight and poignancy, to saturate the project with the profundity that McKurtis was expecting, therefore rectifying its absence. Whether this is for the benefit of McKurtis, for Ambs himself, or for the audience remains unknown. Is he manufacturing the enlightenment that eluded Larry? Or, perhaps, did documenting this journey provide an inspiration for Ambs, utilizing the actions and experiences of McKurtis vicariously in order to create the accompanying literature that is the script of For Thousands of Miles. Whatever the case may be, it is a demonstration of the symbiotic relationship between life and art as McKurtis inspires Ambs; with Ambs trying to return the favor.

FOR THOUSANDS OF MILES from mike ambs on Vimeo.