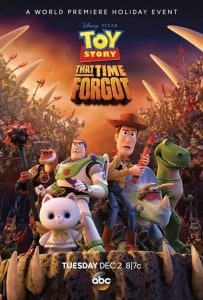 Nearly a year after its original television airing on ABC comes the release of Toy Story That Time Forgot, a holiday special continuing the Toy Story saga, on Blu-ray and Digital HD. Clocking in at a mere 22 minutes, fans of the brand will likely be disappointed that their pals Woody and Buzz had such little screen time. And while it was dubbed a “holiday event,” there was barely more than a glimpse of a Christmas tree, so it isn’t exactly a mood-setting short.

All that said, the animation is that of Pixar quality, down to the little hairs and scales on the toys. Also, all the outstanding voice actors are back, including Tom Hanks as Woody, Tim Allen as Buzz Lightyear, Joan Cusack as Jessie, Kristen Schaal as Trixie (taking on a more prominent role in this one), Wallace Shawn as Rex, Timothy Dalton as Mr. Pricklepants and Don Rickles as Mr. Potato Head. Joining the crew is the phenomenal Kevin McKidd as Reptillus Maximus and Emma Hudak voicing (and rather hilariously so) Angel Kitty.

While Disney aims to add some bulk to the combo pack by offering some behind-the-scenes shots of the filmmakers attending Comic Con, a karaoke featurette, “deleted scenes,” etc., I would still much rather have had a full-length version of this film, which, as usual, shows off the animators and actors in top form. 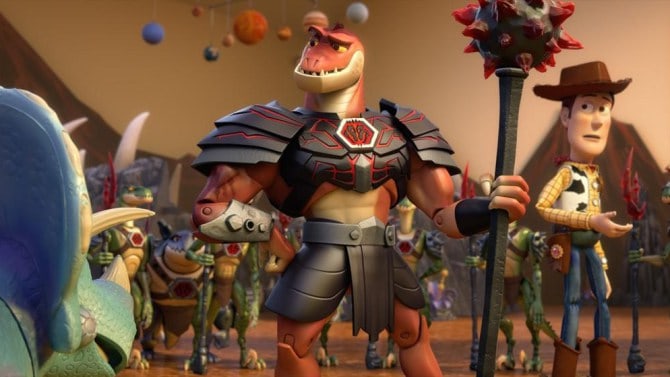 The was a notable making-of feature that went into quite a bit of detail about how the newest members of the Toy Story universe came to be and a bit of back story about these new dino warriors.

Overall, this might make for a neat gift for huge fans of the Toy Story trilogy or for those aching for more time with the popular playthings, but the film itself is way more enjoyable than the additional features, to be sure.