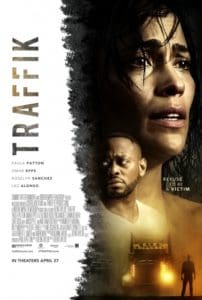 Watching Traffik is a bit like being stuck in rush hour congestion. You’re bored; you begin to question the decisions that led you there; and you’re just waiting to get through it.

Incremental bits of simple, mostly unnecessary exposition are doled out in arduous fits and starts through the film’s first half. When some suspense is finally delivered, it comes with an uncomfortably artless depiction of human trafficking. Serious soundtrack selections and severe posturing border on irony in a final act that neatly races through plot points of a disturbing real-life scourge.

Investigative reporter Brea (Paula Patton) and her humble mechanic boyfriend John (Omar Epps) are heading to a scenic Northern California estate for a weekend getaway. While stopped at a countryside gas station, John has a brief confrontation with a group of central casting bikers, and Brea has a strange interaction with the gaunt, jittery Cara (Dawn Olivieri). The reporter’s lack of journalistic instincts in this encounter, and later, are perplexing.

Extricated from the situation by the local sheriff (Missi Pyle), who shows up Just. In. Time., the couple makes it to the palatial contemporary retreat in the mountains for some R and R (and frolicking in the magnificent infinity pool).

Eventually, Cara arrives at the mansion with the gang, including bald, goateed leader, Red (Luke Goss). They’re looking for an incriminating satellite phone that changed hands at the gas station, and Red is willing to kill for it.

What should be a simple enough setup for a siege thriller is made way too complicated by a fussy script and a tendency for director Deon Taylor to focus on superfluous details. Early on, Brea has a wordy, pointed argument with her editor (William Fichtner) over a story that will obviously serve as a thematic bookend for the coming harrowing situation. Like most scenes in the movie, this one is too long, but at least it gives us a few minutes with the always-interesting Fichtner. 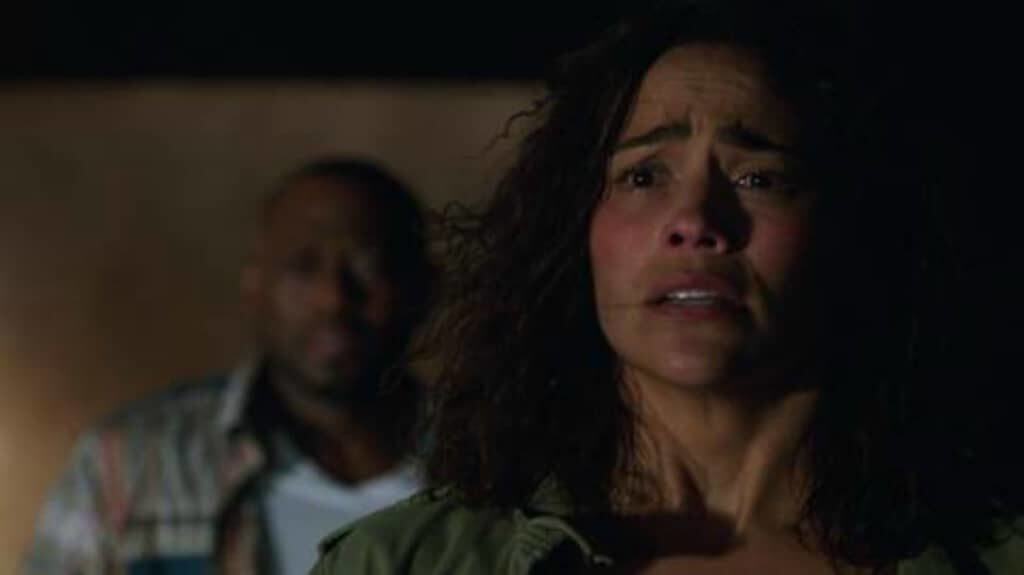 Not interesting is the inclusion of a second couple, Brea and John’s pals, played by Laz Alonso and Roselyn Sanchez. He’s a jerky, fast-talking sports agent, and she’s just kind of there. They provide mind-numbing chit-chat in an early dinner scene. Later, they crash their friends’ romantic weekend to be put in danger and for Alonso’s loudmouth character to stir up rote relationship drama. We also get to listen to half of a long, unnecessary phone conversation involving one of his high-profile clients being arrested.

After some extended fretting over the satellite phone that contains evidence of Red’s human trafficking ring, the life-and-death struggle is on. Taylor generates some tension in the dead-of-night standoff outside the home and (for once) doesn’t waste time when it comes to showing how lethal Red’s crew can be. A chase through a forest is stressful, and the lighting, even if it comes from some unusually bright headlights, creates some interesting shadows.

Disappointingly, Traffik quickly falls back on thriller clichés to move the action forward. There’s a good Samaritan who will surely become an easy victim, a car that won’t start, character swerves and a rush to transfer files. (Also, why attempt to attach dozens of pictures to a message when a few will do?)

Patton, who also serves as producer, is clearly committed to the role and the cause of shining a light on a serious issue. The film, however, hedges. Providing some on-screen text with alarming human trafficking statistics at the end clearly isn’t enough, nor is a slo-mo rescue.

Much of the awfulness of the situation is sanitized and the continually awkward, protracted storytelling weakens the impact. What could be a poignant, upsetting trek through the underbelly or just a rousing potboiler is instead a clumsy, uninteresting mixture of both.