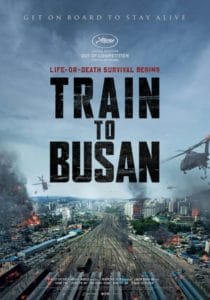 Before checking out Train to Busan, I thought that I wasn’t going to see another zombie movie that I cared for for at least a half a dozen years or so, due to the ridiculous zombie saturation we’ve had over the last several years. Maybe it’s that I actually watched this while traveling (on a plane to Iceland, not a train to Busan), which interestingly did add to the experience, but either way this one is worth your attention.

The film sets itself up like a Roland Emmerich disaster flick, introducing us to each of the characters and giving us a bit of backstory before they’re thrown into this mess together. Despite some slight attempts to add a bit of complexity, Train to Busan keeps things simple: there’s a zombie outbreak on a passenger train and everyone must avoid getting eaten or turned.

Indeed, the premise is simple, but the execution is what counts in a film like this; fortunately Train to Busan doesn’t disappoint. Chock full of action set pieces and suspenseful moments, the film plays out like a more entertaining version of World War Z with better effects and less Brad Pitt.

The zombies in this world are of the fast variety, and they are particularly nasty. They don’t even seem that interested in eating folks; it appears their goal is more to spread the infection. When bitten, the change takes place in a matter of seconds and survivors better watch out because these guys have the lemmings trait similar to those of the infected in World War Z, where hordes throw themselves at their victims. This is an effect that’s used sparingly but packs a punch when it does occur. 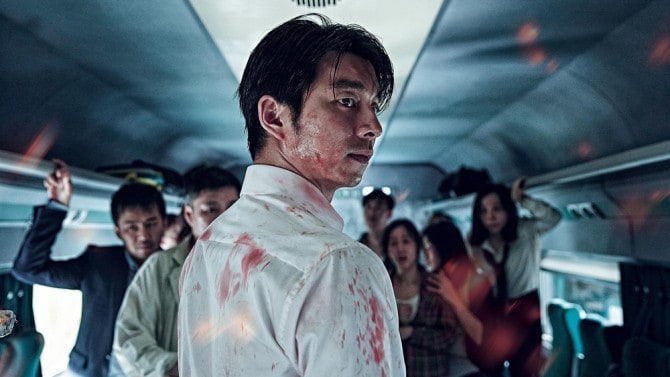 The majority of the film does take place on the train, however there are several moments in which the passengers disembark at other stations in order to see if survivors are present. These small interludes break the possible monotony of having the proceedings take place in only one location, however the train scenes are the most entertaining bits offered.

One sequence involves part of the group getting separated from the others and needing to navigate through three cars full of undead in order to reunite with everyone else. To complicate things, it’s discovered that darkness throws them off, so the survivors must only move when the train enters a tunnel. This is one of several surprisingly thrilling moments Train to Busan offers.

Though it does successfully manage to deliver an entertaining and well crafted zombie-disaster film, there’s nothing unique about the movie other than the location. It’s very much a zombie movie, a very entertaining one, but a zombie movie nevertheless, and I know many people are still feeling ghoul fatigue.

If you’re in the market for a solid thriller that emphasizes action over horror and contains more than a few surprises, Train to Busan is worth a look. For those of you still tired of the whole zombie craze, I would suggest adding it to your watch list for later viewing. When you’re ready to hop back on the zombie bandwagon, this train will be there waiting.