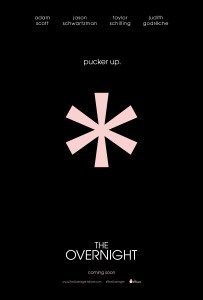 Patrick Brice’s The Overnight begins with an awkward sex scene between our two leads, Alex and Emily, played by Adam Scott and Taylor Schilling, setting the stage for what will be an uncomfortable, yet hilarious, 80 minutes of awkward. Brice pulls no punches in this slightly bizarre exploration into the sex lives of two thirty-something couples, as they attempt to keep the spark alive while raising children.

After recently moving to Los Angeles, Alex and Emily attend a children’s birthday party in hopes of finding other couples that they may become friends with, when they meet Kurt, played by Jason Schwartzman, an odd but polite father at the party. After a brief conversation, Kurt invites Alex, Emily and their son, RJ, over to their house for dinner.

Upon arriving they meet Charlotte, Kurt’s wife, played by Judith Godrèche, and the four hit it off right away. As the night wears on Charlotte and Kurt convince the other couple to allow their son to spend the night, giving them more time for drinks and conversation. From here, things begin heading down a strange path as Alex and Emily start to become paranoid that Kurt and Charlotte may have ulterior motives.

At this point, most viewers have an idea of where things are heading with The Overnight; it seems that Kurt and Charlotte are attempting to coerce the other couple into a swingers situation that will lead to a plethora of awkward comedic moments, but I’m happy to report it completely subverts that expectation for the most part. It’s no spoiler to say the film is sexually charged, but the bizarre road it takes is completely unexpected and refreshing. 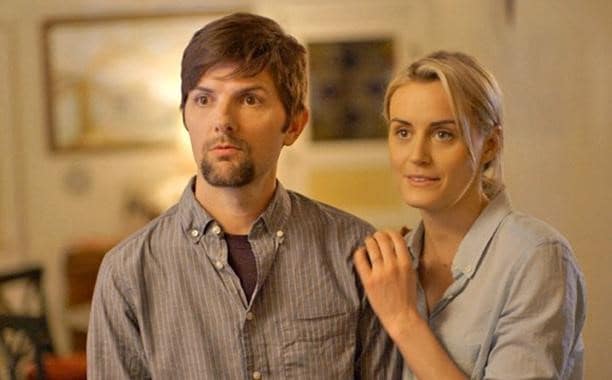 The film is perfectly cast, and seems as though these roles were tailor made for all four actors in them. Jason Schwartzman’s Kurt is a relentlessly upbeat artist with a passion for water filtration – the perfect oddball character for Adam Scott and Taylor Schilling to bounce their own comedic stylings off of. It’s a great chemistry between everyone, which is of the utmost importance in a film like this that takes place in mostly once place over the course of one evening with only four characters.

The comedy is mostly dialogue driven and stems from Schwartzman and Godrèche eccentricities and the awkward moments that arise. There is however, a number of visual gags, mostly involving penises, which I would not dare spoil; as low-brow as it sounds, they are quite hilarious.

The Overnight is a surprising film in many regards but is certainly not the type of comedy for everyone. Yet it worked for me on nearly every level. People who feel easily uncomfortable by awkward situations may find themselves shifting in their seats quite a lot for this one, but as a fan of that style myself, I was loving every uneasy moment.