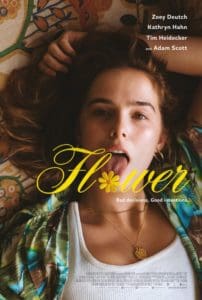 Max Winkler’s Flower cold opens with the film’s lead, Erica, fellating a police officer in his cruiser while two of her friends shoot a video for blackmail purposes. A provocative way to start off a film about a precocious 17-year-old (Zoey Deutch) whose mother’s impending nuptials and father’s incarceration have sent her life into a tailspin.

After her soon-to-be stepbrother, Luke (Joey Morgan), is released from rehab, Erica’s bitchy attitude toward him turns to friendship after she discovers he was sexually abused by a teacher as a teen. She hatches a plan to get back at said teacher, but things go awry and Erica will be forced to confront her life choices head on.

Flower is a pitch-black, coming-of-age comedy with Deutch and Morgan completely stealing the show, both delivering stellar performances of conflicted, complex characters. Erica is a sexually promiscuous free spirit, doling out BJs to men to blackmail them in order to save up money to bail her deadbeat father out of prison.

She’s devoted to her mother, played by Kathryn Hahn, but up until this point, Erica has successfully sabotaged any attempt for her mom to find new love after her husband split. Her new fiance, Bob, played perfectly by Tim Heidecker, won’t be so easily scared off, however, and Erica begins to realize he’s there to stay. 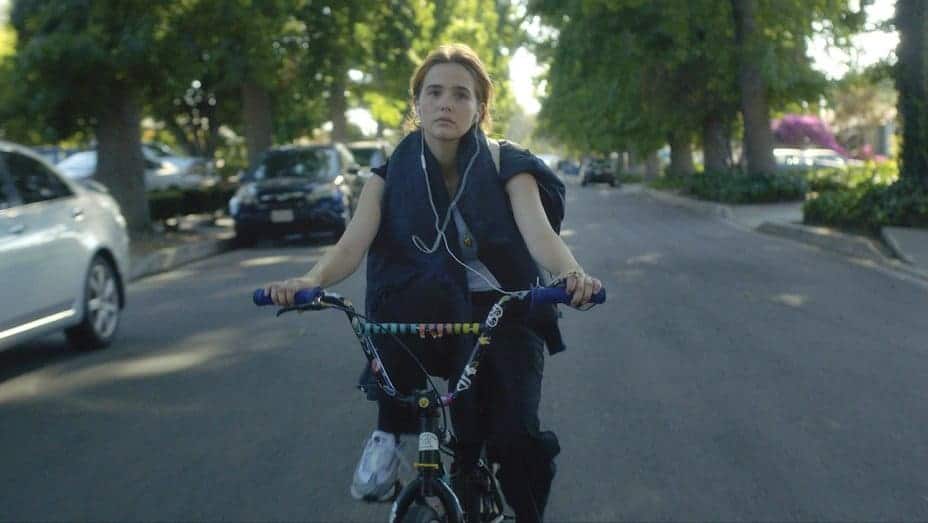 To complicate matters, Luke comes home to live with them after his release from rehab. Luke appears to be emotionally fractured, having frequent panic attacks and regularly stress eating to suppress the previous trauma in his life. It’s the unlikely, and often awkward friendship, formed between Luke and Erica, that makes for the strongest element of the film.

While consistently raunchy, Flower manages to remain funny even after the final act takes a tonal shift and heads into even darker territory. It’s evident that this film was produced by Rough House – Jody Hill, Danny McBride and David Gordon Green’s company – which created similarly dark comedies like The Comedy and Donald Cried. This company is in the process of reshaping the American comedy, and Flower is another great entry in their growing filmography.

With all-star performances from Zoey Deutch and Joey Morgan and a touching, funny, slightly disturbing (in a good way) script, Flower is one of the best indie comedies I’ve had the pleasure of seeing this year and one that should not be missed.