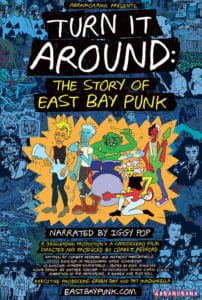 Growing up on the East Coast, I never had the opportunity to experience the punk rock boom taking place in the San Francisco Bay Area (or, more specifically, the East Bay region). However I was constantly admiring the movement from afar, soaking up every band that would emerge from the area and buying every issue of Maximumrocknroll as soon as it hit the shelf of my local music shop.

Corbett Redford’s documentary Turn it Around: The Story of East Bay Punk chronicles the history of the punk scene in the East Bay, highlighting the bands, venues and personalities that helped create a punk rock mecca in the ’80s and ’90s. Through loads of archival footage and interviews with nearly all of the most influential bands from the area, this nearly three-hour-long film aims to create the most complete time capsule of East Bay punk imaginable, and it does succeed; though like the music it celebrates, it’s a messy endeavor.

Iggy Pop sporadically narrates the film while we travel from the late ’70s through the ’90s in the East Bay, covering a wide array of topics, from the establishment of the different cities involved to the creation of Maximumrocknroll and the 924 Gilman Street music collective. Executive produced by members of Greenday, one of the most famous bands from the area that signed to a major label (and sustained fan backlash for selling out), the doc packs in a metric ton of information loosely organized but mostly feeling haphazard and meandering. 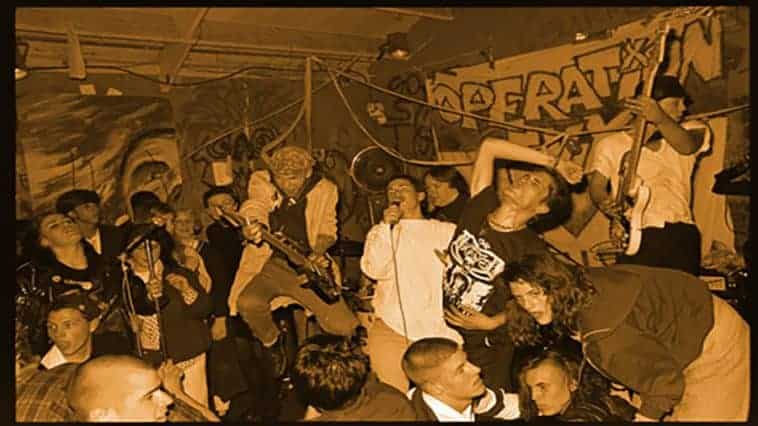 After laying out the geography and a brief early history, the film mostly maintains its focus on 924 Gilman Street, an industrial space turned punk venue in Berkeley that became the CBGBs of the West Coast, fostering such bands as Greenday (though not initially, as their sound was deemed “too poppy”), Rancid, Operation Ivy, Jawbreaker, Crimpshrine and many more. The venue closed in 1988, something the film nonchalantly mentions, then reopened in 1989, which was mentioned even more casually.

Still, despite its unorganized content, overwhelming runtime and information overload, I couldn’t help but be heartened by the sincerity and love put into in this film. Opening with an animated sequence directed by Tim Armstrong of Rancid, it was evident that all those involved with this project felt passionately about this time and place, and that made for an immensely entertaining experience.

Having grown up in the punk scene myself, albeit in a much smaller and more creatively bankrupt area, Turn It Around made me look back fondly at the days of attending shows in cramped, 120-degree venues that were packed with way too many people, violating every fire code in the book, drenched in sweat and a little blood (mostly from other people) and loving every second of it. It’s a niche film to be sure, but it’s one that those outside the East Bay can easily resonate with as well.