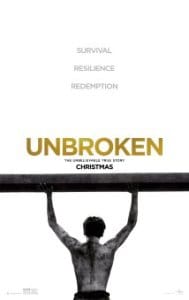 The true life story of Louie Zamperini is remarkable. The movie version is efficient and satisfactory. Unbroken respects the man it’s based on and communicates his tale in a way that resonates on a surface level. The film is well-scripted, directed, and acted, but it can’t shake the biopic and POW genre familiarities. Painting in broad strokes, director Angelina Jolie deserves credit for not relying on heaping helpings of sentimentality to force a response, though there’s a detachment that makes the events feel more like a checklist than a harrowing journey.

Zamperini (Jack O’Connell) was a Depression-era kid turned Olympic distance runner, turned World War II bombardier, turned prisoner of war. Unbroken takes us through the turns step by step. Thankfully, little time is spent on Louie’s childhood, providing only the narrative bare necessities without melodramatic overkill. Conversely, more could’ve been communicated with the Olympic experience. Louie runs a fast final lap in his race, but there is no context competitively or emotionally. As his family cheers while listening to a radio broadcast, we have no real connection and only a superficial correlation is made between Louie’s stamina and his coming wartime horrors.

Of course, the meat of the film deals with the aftermath of a B-24 crash that leaves three survivors — Louie, pilot Allen “Phil” Phillips (Domhnall Gleeson), and “Mac” McNamara (Finn Wittrock) – adrift in the ocean. After 47 days at sea, Zamperini is captured by the Japanese and sent to a POW camp where he’s subjected to physical and psychological abuse by the sadistic Mutsushiro Watanabe (Takamasa Ishihara).

Technically, the film is impressive. Jolie and Director of Photography Roger Deakins compose some stunning compositions. Based on the book by Laura Hillenbrand, the script is credited to a team of heavyweights – Joel and Ethan Coen, Richard LaGravenese, and William Nicholson. It all looks and sounds great, but instead of penetrating it feels precious and constructed. Uniforms look like costumes, war camps look like sets, and the black soot on the prisoners working the coal mines feels like it was smeared on by makeup artists.

Fully embracing its PG-13 tendencies, Unbroken pulls some punches. Sharks circling Louie’s lifeboat never truly twinge the nerves. We never really see the aftermath of the blows from Watanabe’s kendo stick; though Louie’s often battered he’s rarely bruised and his anguish is shown as generalized faintness. The one disturbing shot shows an emaciated Louie and Phil stripping down to be washed by their captors, but the moment is fleeting and we’ve yet to connect with their characters. In fitting with the glossy production they inhabit, O’Connell and Gleeson are set dressing.

That missing sense of danger makes Unbroken ring a bit hollow in the end. Zamperini was put through the wringer and the toll taken on mind and body is mostly left for us to imagine, it’s not on the screen. Empathy by way of clichéd admiration is one thing; making us think and perhaps even making us squirm on occasion would deepen the feelings of compassion.