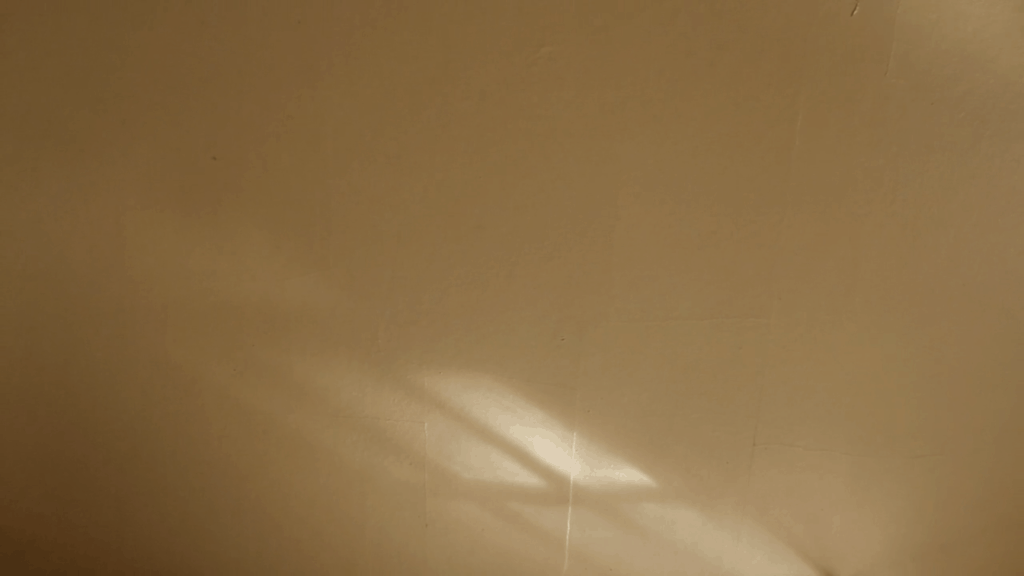 Images carry with them an imposing power, one that is seemingly inherent given the fact that this power of the image has existed since the primitive ages and still remains with us today. In the early stages of art the only intention images served was utility (pure and simple) to capture the characteristics of the subject (i.e. portraits, landscapes, and still-lifes) in order to preserve said subject. As ideas and philosophies shifted, artists began imbuing their works with a soul, capturing and creating mood and tone within the subjects, thus constructing stories in and around the images themselves.

A completely utilitarian task – capturing images for remembrance and perpetuity – shifted towards the more artistic task of creation. Creation of images and their essence, in turn, progressed towards an obsessive search of beauty in nature and/or the complete fabrication of such from imagination with one aspect remaining constant throughout – the search. 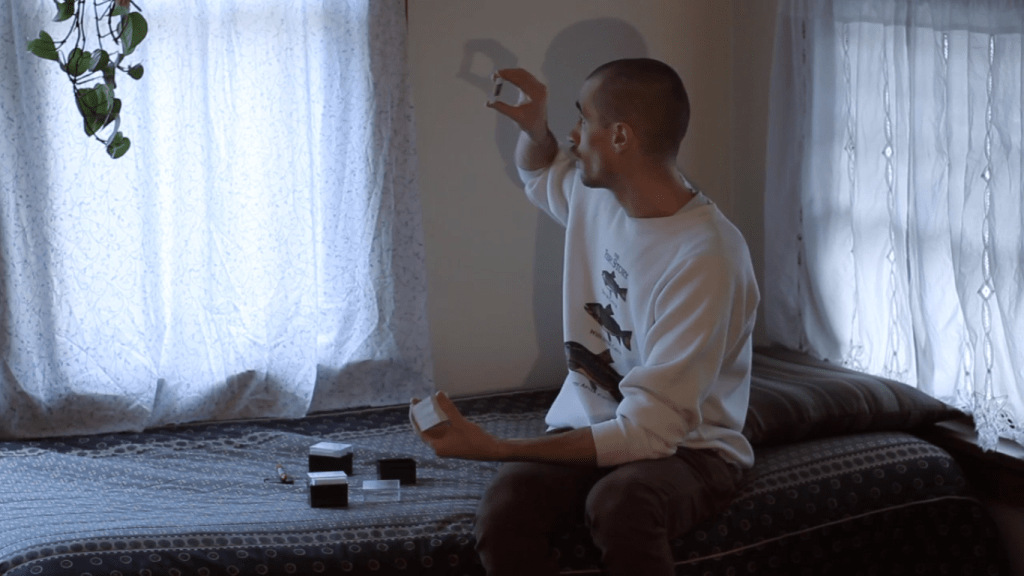 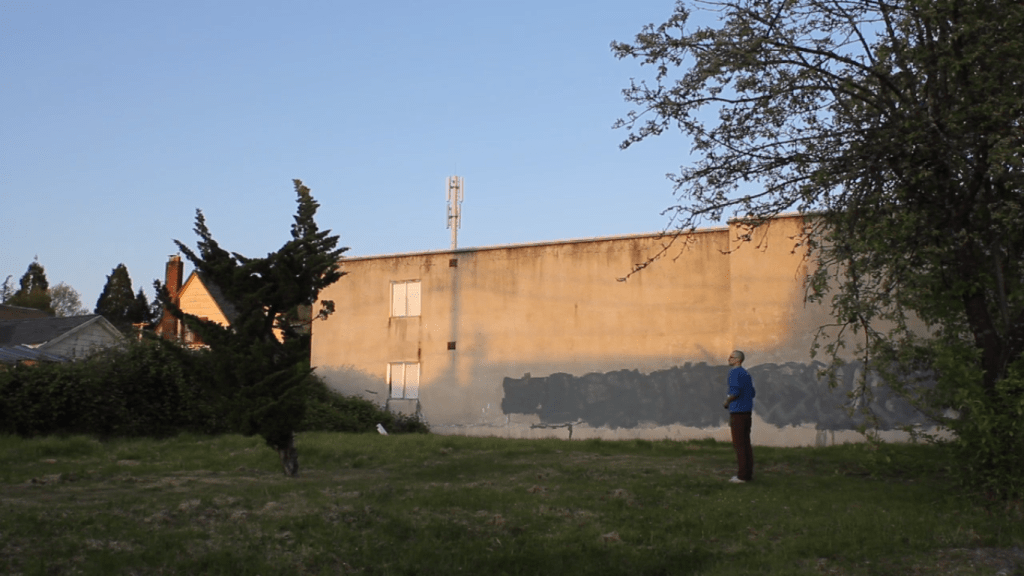 This undying search of beauty within image epitomizes the essence of Ian Clark’s MMXII, a experimental examination of the aforementioned search of the perfect image. Perfection hidden amongst the hues and pigments, visual appearance relentlessly transformed by the all-important, ever-changing light of the sun or the artificial productions of such, until all contributing factors shift impeccable for an instance, long enough to capture for perpetuity.

Clark’s camera combs the ever-fruitful image fields of nature, a series of static frames gaze affixed to rushing waters, passing clouds, and the stockstill limbs of trees, patient in waiting for all necessary elements to align. One long take follows another in succession with its observational lens locked-on throughout the duration of dying light. Through unsatisfactory results or sheer greed, the image quest continues into the realms of human manufacture – a marriage of light and shadow, the offspring of a window pane reposed against a barren wall incrementally waning away to grey – and then, finally, a confrontation of the two in an organic juxtaposition split-screen with cloudy blue skies dissected by the beige monolith of architecture sullied by the passage of time. 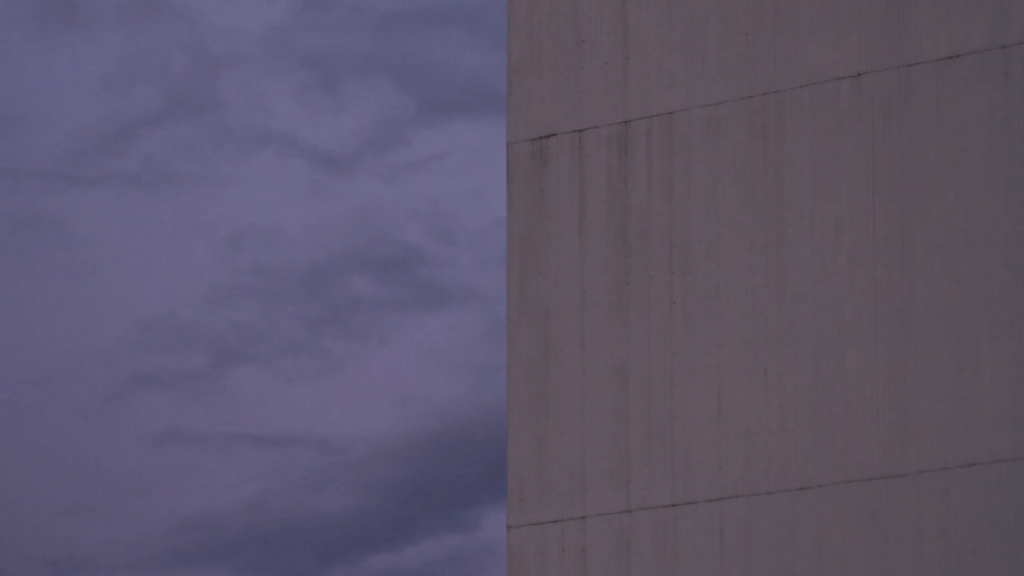 In a litany of ways individuals throughout history have attempted to capture truth in beauty and vice versa, employing paints of varying compositions, photographs, sculptures of stone and metal and an exhaustive number of additional techniques. All originally created for the simple, functional act of capturing and recreating naturally-occurring beauty. Clark’s search in no different rifling through a number of image-capturing methods – video recording, photographic camera (Pentax?), editing software – in order to memorialize the elusive alignments needed for his project.

The search develops into obsession or a compulsion (like the history of art itself condensed) as Clark descends into a rabbit hole of potential residences after sifting through nature’s offerings, and a brief stint examining man-made structures; the camera peers inward, becoming a reflective exploration of the process itself. A self-portraiture emerges as Clark’s ideas manifest themselves onward until the end through the reintroduction of a second camera (manned by Nandan Rao) and then, a third. The utilitarian act of image-capturing coalescing with the otherworldly act of image-creating – projecting one back onto the other – with the furthering technological developments blurring the realities of origin into a hazy smudge. 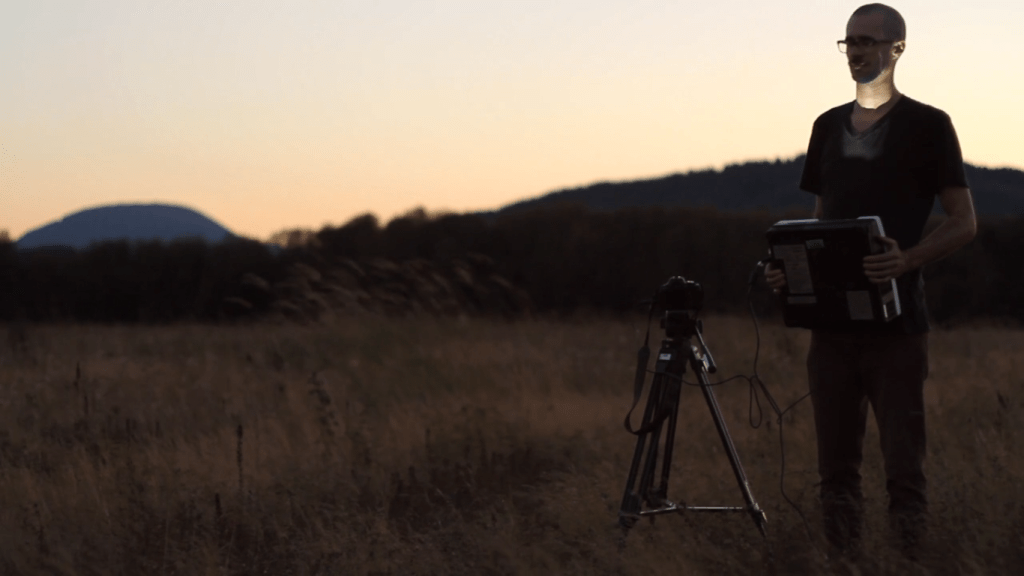 The importance of authenticity is broached, as well, as Clark begins manipulating his documentations and pre-established images. The start of which piques a curiosity, leading to a combing of the strands of memory as to the authenticity of the previously-witnessed stills. Were these images true? Does truth matter? Perhaps, this elusive beauty that so many seek resides in the actual act of the searching.

YOU CAN WATCH THE FILM (IN ITS ENTIRETY) BELOW:

MMXIII from IAN CLARK on Vimeo.