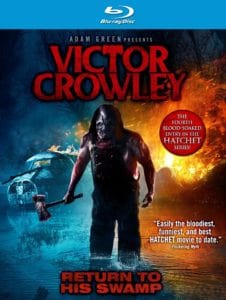 When it was released a little more than a decade ago, Adam Green’s Hatchet resonated with horror fans as a gloriously gory throwback to ’80s slashers, filled with over-the-top practical effects and purposeful oddball humor.

Victor Crowley, the fourth film in the Hatchet saga and named for its hulking deformed slayer, continues the concept established in the first three movies but on a much smaller scale. The tone is cornier, and there are fewer of the Crowley kills that made the series stand out.

Hitting Blu-ray, courtesy of Dark Sky Films, the Victor Crowley disc features a good amount of bonus content for fans to dig into. The movie, however, only offers more – or much less – of the same, showing the strains of a tight budget and a mythology that’s run its course with nothing new or fun added to the mix.

Ten years after the original’s massacre in Honey Island Swamp, survivor Andrew (Parry Shen) is touring to promote the book he wrote about the experience. One of his fans, Crowley aficionado Chloe (Katie Booth), is hoping to direct a movie based on the murders and coax his cooperation at a book signing.

Convinced to return to the swamp for a lucrative interview, Andrew’s private plane loaded with his pill-popping agent (Felissa Rose), a talk show host (Krystal Joy Brown) and a camera crew, crashes in the bayou. Meanwhile, Chloe, along with her boyfriend (Chase Williamson) and make-up artist (Laura Ortiz), inadvertently raise Victor Crowley from the dead – conveniently very near the crash site – via a YouTube incantation. These two groups converge in the crashed plane, waiting to get picked off.

That wait is excruciating. Much of the film is spent with these underdeveloped, unwitty characters bickering and joking in a banged-up fuselage, none of them saying anything interesting or funny despite some far-reaching attempts at character development and humor. The one exception is Dave Sheridan as the swamp guide/comic relief; his dedication to the material is admirable.

Green includes a prologue set in the ’60s presumably to kickstart the film with a bloody bang, which it does, but its lack of connection to the main narrative highlights the general lack of purpose in the script. The intro and a detour from the plane into a swamp cabin are the only moments when the film springs to life, showing Victor in his element. He howls, dismembers and bludgeons, and for a few fleeting moments, Victor Crowley feels inspired.

The audio and video quality of the Blu-ray also shines during the limited carnage, the DTS-HD Master Audio track capturing every shriek and thwack of Crowley’s hatchet cutting through flesh and bone. The practical effects in these sequences are also effectively gross, with gooey wounds, crushed skulls and severed appendages aplenty. The video transfer is also solid, especially in the dark swamp with everything perceptible in the foggy environs. Some odd choices, including giving the plane a pinkish interior hue, don’t fare as well.

By far the best feature on the disc is an extensive, behind-the-scenes feature called “Fly on the Set.” The hour-plus extra takes us from the first day of shooting right through the final gore insert shots. Green is an amiable guide through the filmmaking process, showing a clear affinity for his creation and his cast and crew.

The feature also includes the director’s introduction at the film’s surprise premiere late last year. His talk is heartfelt, bringing up some genuine personal issues and going into to detail behind dedicating the film to Wes Craven and George Romero.

There are two commentary tracks on the disc, one with Green and members of the cast and another with the director and some of his technical crew. Each is a fun and informative listen. There’s also a 25-minute interview with Green that goes into some good detail on the series and his reasons for resurrecting Victor… again.

The extras are enjoyable and will surely delight Hatchet enthusiasts, but Victor Crowley itself is a forgettable, watered-down version of the series that spawned it.