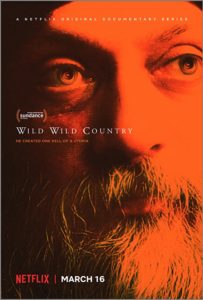 Somehow – in my 34 years on this planet, sucking up as much pop culture as humanly possible – completely missed out on the incredible story of the Rajneesh movement throughout the ’80s and the tumultuous rise and fall of their massive Oregon ranch.

Thankfully, directors Chapman and Maclain Way are here to fill me in with a thoroughly binge-worthy, six-part documentary hitting Netflix on March 16th, Wild Wild Country. With interviews from the highest- ranking individuals in the group, referred to as a cult from here on out because – though not on the same level as Jonestown – there’s no better way to describe them, the film chronicles its humble beginnings as an ashram in India to the move to a massive, 100-square-mile compound in Oregon and the ongoing battle between its members and the nearby town of Antelope.

Everything was being recorded all the time, so the filmmakers were fortunate in having a metric ton of footage to compile and present, making sure that visually the lengthy narrative never feels like a slog. This footage, blended with the interviews and contemporary location shots, are all expertly woven together, presenting an beautifully crafted documentary that keeps viewers hooked on both story and visuals.

As the titles implies, this is an absolutely wild story, filled with constant intrigue, and for someone like myself who was completely unfamiliar with the events that took place, I was hanging on every twist and turn, gobsmacked at the next bit of craziness that was revealed. This is definitely one worth going into cold, but even if you have a general idea of what went on, there’s still plenty of fascinating material here to absorb.

As someone who has a somewhat morbid curiosity when it comes to cults, I was prepared for another documentary espousing the dangers of them, exposing them for the frauds and charlatans they typically are, and while in some regards that’s true, Wild Wild Country takes a much different approach at presenting its material, making it feel completely unbiased, and devoting equal time to both sides of this story.

In one instance, it’s easy to sympathize with the cult members and even their leader, Bhagwan Shree Rajneesh. They were simply looking for a safe place to practice their beliefs free of judgement and prosecution from the rest of the world. Then we hear from the townspeople who had to live next to them, and things begin to get murky when you hear about the Rajaneeshee (or sannyasins) taking up arms and patrolling the streets with automatic weapons. Like so many of these cults, it appears this one began with good intentions, but money, power and outside threats poisoned their way of life and brought their downfall.

One of the key members of the cult, Ma Anand Sheela, is interviewed extensively throughout the film and proves to be its most enigmatic subject, speaking quite candidly about what they did while never ceasing to be charismatic and confident. She wasn’t just a welcome addition to the film but a necessary piece of the puzzle that simply wouldn’t be able to work as cohesively without her.

Wild Wild Country is the first great documentary of 2018 and one that gets a high recommendation. I dare you to start it and not end up binge-watching this one.