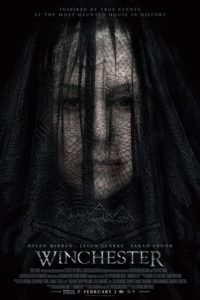 The stories and rumors behind the building of The Winchester Mystery House in San Jose, California, are a fine jumping off point to create an effective ghost story. Unfortunately, much like the real mansion dubbed one of the most haunted houses in the world has turned into a tourist trap, Winchester takes an interesting foundation and constructs a bland journey through the tropes. Directors Michael and Peter Spierig generate some suspense and curiosity through visual flourishes, but the film is sorely lacking in the “inspired” portion of the “inspired by actual events” title card.

The board of the Winchester Repeating Arms Co. hopes to wrest control of the corporation from heiress Sarah Winchester (Helen Mirren) by declaring her mad. They enlist the services of painkiller-addicted doctor Eric Price (Jason Clarke) to make the desired diagnosis. Arriving at the widow’s sprawling estate, Dr. Price discovers the home is under constant construction, with workers tearing down and building rooms 24 hours a day. A labyrinth of unsound design – staircases to the ceiling, doorways to nowhere, etc. – Ms. Winchester claims the home contains the souls of those killed by her husband’s vile rifles. Through some standard exposition and requisite jump scares, Dr. Price learns she may not be so crazy after all.

Set in 1906, Winchester contains nuggets of ideas that have relevance in 21st century hot takes, opioid addiction and Second Amendment debate chief among them, but The Spierigs’ script isn’t all that interested in real context for the haunting. 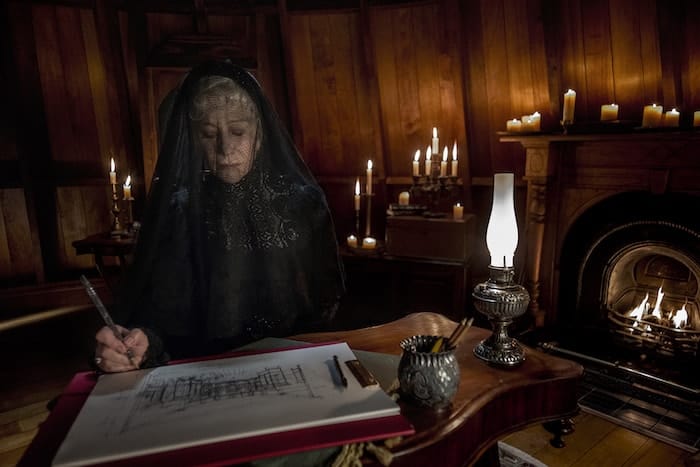 The doctor, a widower himself disturbed by a troubled past, has his laudanum confiscated early on, removing the question of whether his cloudy mind is playing tricks on him. Clarke’s enthusiasm for discovering the truth seems to wane as the doctor makes it through withdrawals. Sarah, veiled in all black as she prowls the halls, has the look of a peculiar ghostly figure, and while Mirren brings some gravitas to her supernatural assertions, the character is merely a tool to explain things and guide Price though his emotional journey. The interplay of the two leads during psychoanalyzing sessions provides potential for resonance, touching on managing fear and conquering grief, though much of the significance is swallowed up when the malevolent ghost strikes.

Yet another widow, Sarah’s niece Marion (Sarah Snook), exists to carry lanterns through dark corridors and to be the mother of creepy horror movie kid Henry (Finn Scicluna-O’Prey), a vessel for the evil. While the late second act reveal of the spirit behind the possession of Henry is effective, the motivation, explained ad nauseum, kills the tension and dulls the surprise. 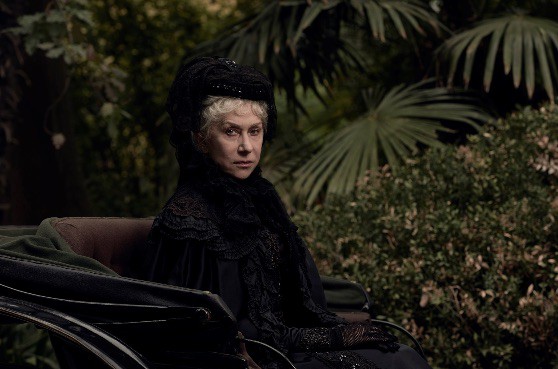 For all the narrative dreariness, Winchester looks fantastic. The Spierigs capture a creepy early-20th century atmosphere and the bizarre home contains several details and dark recesses that set up impending doom. The production design is outstanding, feeling authentic and potentially threatening. Sweeping aerials of the mansion’s exterior show a foreboding, grand scope and inspire examination of the funky architecture, while the lighting and layout of the interiors feel gloomy and constrictive.

The captivating setting is squandered as a backdrop for generic sleuthing and spookiness, complete with mirror gags, the repetition of a slow song, and shadows moving suddenly in the background coordinated with loud soundtrack pops. It’s all standard PG-13 horror fare. Winchester is just as basic thematically, wasting, and even contradicting, its interesting ideas rooted in grief and regret. Rough resolutions posing as cleansing poetic justice are missing rhyme and reason.