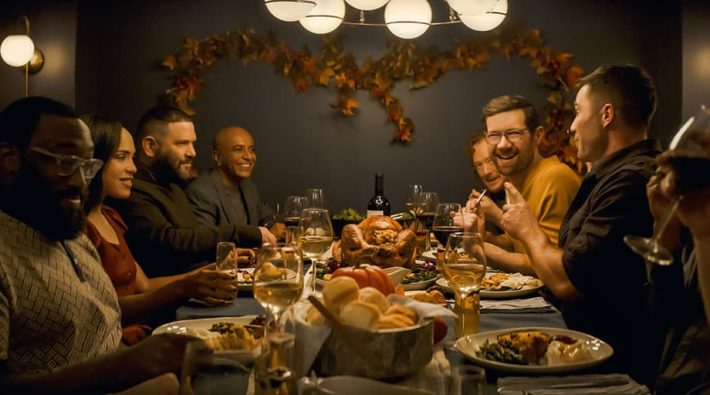 There is a turning-point-type moment in the supposedly subversive, queer romcom Bros that will serve as a breaking point for audiences as to whether they find its brand of righteous, confrontational humor either endearing and funny or obnoxious and self-praising. It is a moment that would serve in your standard run-of-the-mill romcom (read: cis-white and heteronormative and thus boring and conventional in the film’s eyes) as the end of the second-act dissolution between the romantic interests that throws the prospect of their happiness into question.

Hunky lawyer Aaron (Luke Macfarlane) requests his partner, podcaster, activist and museum director Bobby Lieber (executive producer and co-writer Billy Eichner) to “tone it down” while Aaron’s conservative parents are visiting them in New York for the holidays. The relationship was never on stable ground to begin with, as both parties have been emotionally cagey around exactly defining what they are to one another.  But the particularly coded language in Aaron’s request serves as a final straw for the out-and-proud New Yorker Bobby. He winds up vociferously debating Aaron’s mother (Amanda Berse), a second-grade teacher, over teaching queer history in school and regaling the dinner guests with a tale of his parents taking him to see a queer, off-Broadway play that featured nudity; sex scenes; and, as Billy loudly and aggressively reiterates, “seven soft penises on stage” in front of his twelve-year-old eyes.

This is the confrontational, potentially provocative root of Eichner’s wry style of comedy that is somewhat melded to Nicholas Stoller’s Bros, which markets itself as a modest deconstruction of the romantic comedy through its focus on LGBT+ storytelling. The script is buoyed by numerous and extended sequences where Eichner’s Bobby, a 40-something cynic and queer historian who has never been in serious relationship until his meetcute with Aaron, puffs out his chest and stops the film dead by going on rant-fuelled monologues regarding the state of the queer community all to assuage his wounded and lonely heart.

Like these, for lack of a better word, stand-up bits, much of Bros’ humor sticks out like a sore thumb in what is otherwise a fairly standard romantic comedy setup, albeit with a focus on New York’s diverse queer community. More often than not, the film is not interested in telling a moving love story as it is in eliciting “clapter” for its socially conscious punchlines that are no doubt languished over as to get screenshotted and placed on Twitter when the film releases wide. And that’s not even considering the uncountable number of topical celebrity zingers that the cast delivers with the sincerity of a late-night host reading a teleprompter and holding for laughter.

The film primarily serves as a vessel for Eichner’s punchy, slightly edgy, but never truly offensive brand of in-your-face comedy, and any hope of sending up the romcom genre through reclaiming its conventions from the heteronormative mainstream are fallen by the wayside. The story unfurls in a pretty standardized format: boy meets boy; they awkwardly beat around the bush while dealing with their personal lives (Bobby as the director of the first LBGTQ+ museum on a national level and in search of funding and a final exhibit and with Aaron being unsatisfied with his bland job and fearing truly being himself); and gradually involve each other in their respective worlds before a misunderstanding drives a wedge between them and so on and so on.

What chemistry between Macfarlane and Eichner that does appear on screen feels strained, more so due to the one-liner-centric script as opposed to the actors’ performances (although Eichner only really feels confident in the lead role when he gets to sink his teeth into the carefully constructed punchline he wrote about Pete Buttigieg or something). His press tour victory lap of touting Bros as some kind of milestone genre film (before many on social media were quick to point out his statement unintentionally engaged in erasure of such other films as Fire Island from early this year) wind up unfortunately overselling how much of a subversion Bros really is.

Likewise, whenever Bros attempts to get on a sincere soapbox about the community it represents – either in terms of its history, how far it has come, or what directions it should go in for future generations – it fits as awkwardly into the film as the stand-up bits do to the genuinity of the love story. That the subplot of Bobby’s queer history museum, for example, waffles between sincerely honoring history and dryly riffing about it speaks to a severe tonal inconsistency in the script. It points out to the audience constantly how important queer history is to be studied and preserved only to, within the same sentence, get a joke off about Abraham Lincoln possibly being bisexual.

When his script can get off the self-important pedestal it places itself upon, many of the jokes do tend to land. The accompanying cast, when given their moment to recite a punchline, all exude large personalities, desperate to take up the frame but never given a proper moment to feel like real characters. Numerous comedic talents like Bowen Yang, Jim Rash and Eve Lindley appear on the sidelines of Stoller’s film to often steal scenes away from Eichner’s unsympathetic and downright obnoxious rendering of Bobby Lieber, only to fade just as quickly as they shone.

Given the machine gun-like delivery of the lines or the film’s tendency to go off on a cutaway tangent à la Family Guy of all things (like the numerous shots taken at the Hallmark Christmas movie catalog and its engagement in rainbow capitalism that are decidedly hit or miss), it is likely to go unnoticed how the cast seems underdeveloped, but when the central love story is equally lacking in staying power, what exactly is there to grasp emotionally with Bros?

Bros can be very funny when the right joke comes along, but as a romcom (a subversive one, a deconstructive one, or just a plain one with a queer focus,) it is a bland yet self-important film that serves better as a showcase for Eichner’s joke writing than storytelling. Its “clapter”-inducing script will no doubt find its audience, but I can’t imagine that audience will be cheering on Stoller’s perfunctory direction or the underdeveloped narrative with the same fervor as the many clap backs and one-liners. They were just looking for giffable quotes, and that’s one of the few things Bros does well.