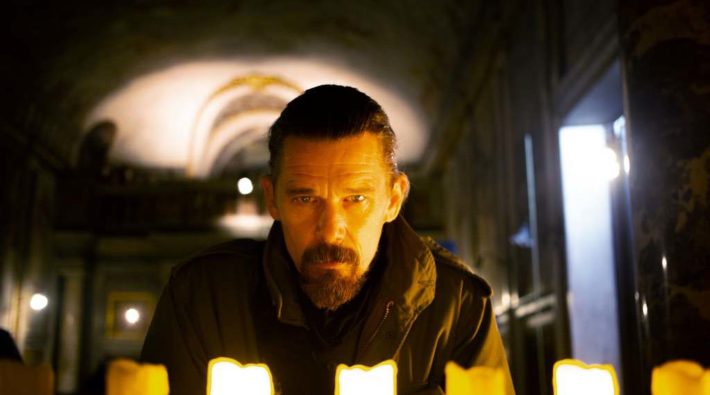 Zeros and Ones directed by Abel Ferrara, is chock-full of military, political, religious, and even familial musings that still fail to mount a cohesive and impactful story. The objectives of the main character JJ (Ethan Hawke), a soldier in Rome who works to chronicle events for the military, are foggy, as are some of the scenes themselves, as everything is filmed under the cover of night.

And even as the Vatican disappears amidst multiple fiery explosions, it’s hard to know what part he played in the deed, besides its filming. The only thing that is clear is that he’s searching for his brother, Justin –  the “revolutionary,” also played by Hawke – who was put in jail.

The two appear to be on opposite sides, but who’s to say what the sides are? On top of it all, the pandemic plays its own small part through the scenes of hand sanitizing, mask-wearing, and talks of being “negative.” This was my first film where the pandemic makes its presence known, and I didn’t hate it. If it has to be in our daily viewings, slightly ruining the fantasies on our screens, better it be a side character than a main player.

JJ is the throughline, the anchor in the ambiguous storm, as he films various events of the night. He films a waterboarding where a man gets water dumped onto a black cloth held tight to his face. He also participates in the filming of a sexual assault after he’s kidnapped by Russians after the Vatican goes up in flames and is made to have sex with a woman to impregnate her. Besides the doctor in the room and another woman holding a gun as they’re on the bed, the actual sex looks less forced and more like a consenual, sensual encounter as they kiss and she helps him take off parts of his uniform. With non-existent context, it’s hard to see why any of these scenes are important and why JJ’s involvement either helps or hinders them.

This film exists in the in-between, the middle ground. In the beginning, JJ can be seen filming parts of the Vatican. He narrates the scene saying, “Jesus was just another soldier, another war casualty…but on whose side?”

In the introduction to the film, Hawke talks about his character and why he chose the project, and he says he plays a military man who you’re not sure is good or bad. We’re in this weird state of suspense where the characters can’t articulate what they’re doing or their motives. All the details remain unclear, and the picture continues to get more bleary, literally and figuratively, as time wears on.

The only time Hawke is seen as Justin is on video footage as he’s shot up with drugs by men and goes off on how he’s willing “to light himself on fire,” ”how come no one is lighting themselves on fire anymore?,” and how a “government of the people, for the people, by the people, shall not perish.” Hawke gets to be hysterical and shouty as Justin but in going all out as a ranting political prisoner, it’s obvious he’s trying too hard to distinguish his brother persona from the serious, military one. Justin is a plot device, something to not only add a vague political element but to humanize JJ. It doesn’t accomplish this, seeing as their relationship isn’t particularly deep and the brotherly bond is hard to connect with or believe.

The believability of this film is slim all around and more plot details would have certainly helped. Should we take solace that Hawke, in a post-credits scene, confesses he’s also confused as to the film’s meaning? Universal confusion shouldn’t be a selling point or a way to hint at a deeper message. Confusion only causes most to not want to stick it out until the end, and unfortunately, with the way this film is structured, many won’t even make it to Hawke’s reflections.