The below review may include what could be considered “spoilers.”

When one mentions a “Merchant-Ivory” film, all movie-lovers and even some not so well-versed in film know what kind of movie you are talking about – or at least they think they do.  The incredible duo of director James Ivory and producer Ismael Merchant made movies together beginning in the 1960s all the way through Merchant’s death in 2005.  They have made many memorable films together including The Bostonians (1984), A Room with a View (1986), Maurice (1987), Mr. & Mrs. Bridge (1990), Howards End (1992), The Remains of the Day (1993), A Soldier’s Daughter Never Cries (1998), and The White Countess (2005).   They are known for filming adaptations of some of the greatest novels of English literature and doing so on relatively tiny budgets – and yet, with those small budgets – make some of the most visually stunning and sumptuous films of the last few decades.  They also have the ability to attract great talent who work for small salaries just to work with the two geniuses, and actors’ efforts have paid off as numerous actors have received nominations and awards from many organizations including the Academy of Motion Picture Arts and Science.

I had a difficult time choosing between three of my favorite films, not just of the Merchant-Ivory catalogue, but of all time – A Room with a View, Howards End, and The Remains of the Day.  Obviously, I opted for Howards End with its beyond-brilliant cast including Oscar-nominated Anthony Hopkins, Oscar-winner Emma Thompson, Oscar-nominated Vanessa Redgrave, Helena Bonham Carter, and a supporting cast rounded out by Samuel West, James Wilby, Prunella Scales, Adrian Ross Magenty, Jemma Redgrave, Joseph Bennett, Susie Lindeman, and Nicola Duffett. 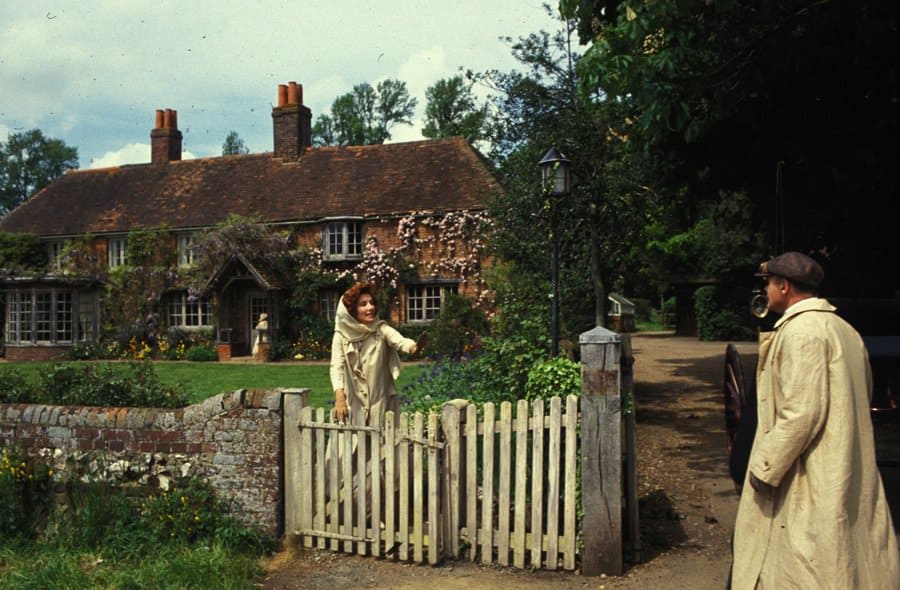 Howards End is the famous novel written by E. M. Forster and adapted by Ruth Prawer Jhabvala (who won the Oscar for her adapted screenplay).  It tells the story of three families who become intertwined:  the Wilcoxes, the Schlegels, and the Basts.  Henry Wilcox (Hopkins) is the epitome of an English millionaire at the turn of the 20th century.  He is at the apex of the class system, once one accounts for the royal family and aristocracy.  His wife, Ruth (V. Redgrave), is a kind, warm spirit who is a bit of a bookmark for her colder, more aloof husband.  They have three children – the one who will inherit the import/export business, Charles (Wilby); Evie (J. Redgrave) who must marry as all women were expected to do; and Paul (Bennett) who must represent the family business in India to make his own way in life.

The Schlegels are not poor by any means, but they do not live in the opulence of the Wilcox family.  Having met in Italy, the Schlegel “girls” – Margaret (Thompson) and Helen (Bonham Carter) – and their brother Tibby (Magenty) befriend and are befriended by the Wilcoxes.  Upon returning to England, Helen stops over with the Wilcoxes at Ruth’s ancestral home called Howards End.  A misunderstanding creates problems between the two families after Paul proposes to Helen and she accepts; the next day, he recants, but Helen has already written her older sister and spilled the proverbial beans.  The women’s Aunt Juley (Scales) heads to Howards End to find out what sort of people the Wilcoxes are only to arrive after a telegram was sent to Margaret saying the engagement is off (it lasted less than 24 hours).  And so, bad blood develops between the two families.  When the Wilcoxes take a flat opposite the Schlegels in London, Helen bundles herself off to Germany and Paul goes to Nigeria to make his fortune.  This will allow the two important women to meet as Margaret calls upon Ruth in what is a wonderful scene of both manners and frankness between the strong-willed Margaret and the meeker Ruth. 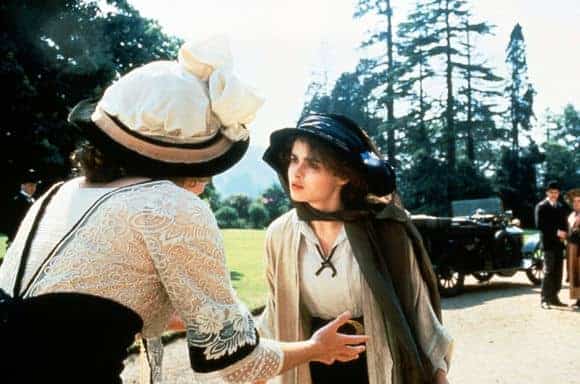 Finally, there is Leonard Bast (West) and his fiancée Jacky (Duffett) (they will marry at some point in the film and so become “the Basts”).  Through a quirk of fate, Leonard meets the Schlegels.  They want to help this economically poor man to whom they take an instant liking.  He becomes a sort of “project” for the Schlegel women, particularly the impulsive and often hot-headed Helen.  They seek Mr. Wilcox’s advice and he suggests Leonard find a new position as the place he works is underinsured.  This advice will prove disastrous to Leonard and Helen is incensed and blames Henry for Leonard’s troubles.

Going back to Margaret and Ruth for a moment – the two reignite their friendship during the meeting I mentioned before.  On Ruth’s deathbed, following a risky surgery, she handwrites a note saying that she wants Margaret to have Howards End.  In one of the most intensely dramatic scenes, the Wilcox family decides to burn the note as they decide Margaret has no right to Howards End and refuse to accept her as the house’s new mistress (even though none of them care about the house more than Ruth did).  This deception by the Wilcoxes and the fact that Margaret knew nothing of Ruth’s note hangs over the film for much of its run time. 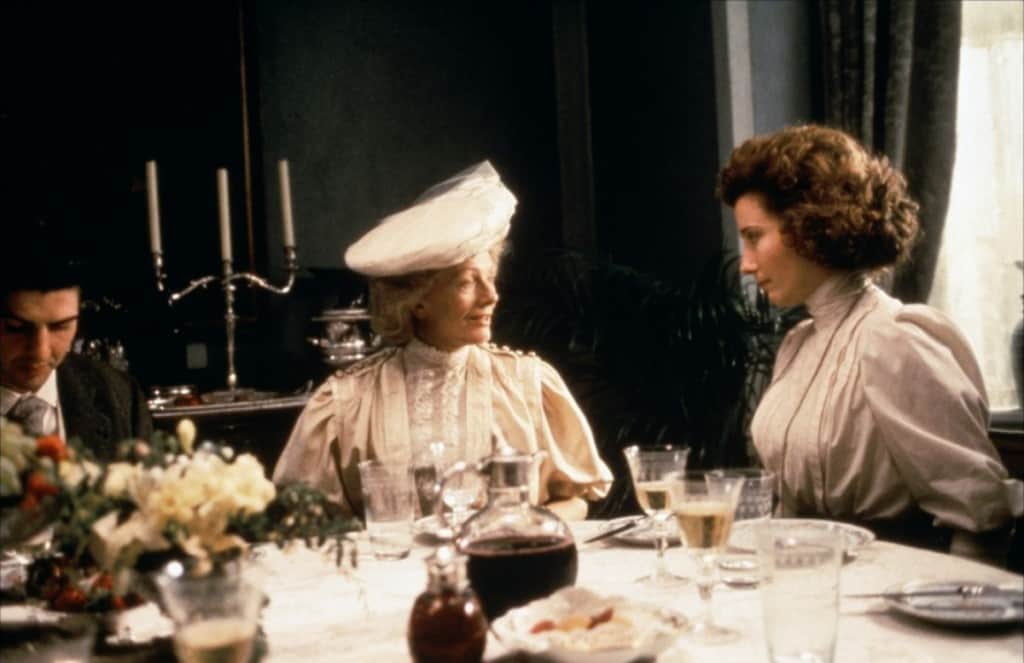 Henry eventually asks Margaret to marry him and she accepts, much to the chagrin of her sister Helen who hates all that Henry Wilcox stands for and blames him for Leonard’s job-related woes.  In one of the more interesting scenes, Helen brings the Basts to Evie’s wedding.  There, Jacky confronts Henry and it is quickly obvious that he had an affair with her when he was married to Ruth and Jacky was but 16 years of age.  Henry first attacks Margaret for trying to trap him, believing that she knew all the time and had let the Basts come to his daughter’s wedding to blackmail him.  However, he quickly realizes Margaret knew nothing, and he is astonished when she forgives him and the two go on to be married.

The final dramatic segment includes Leonard and Helen becoming close and having intimate relations leading to Helen’s pregnancy.  When Henry becomes aware of what has happened, he refuses to allow Helen to stay at Howards End at which point Margaret throws his affair with Jacky back in his face, pointing out the sexist double-standard at play.  Charles finds Leonard at Howards End after the latter appears looking for Helen.  He attacks him with a sword and the attack contributes to Leonard’s death of a heart attack. 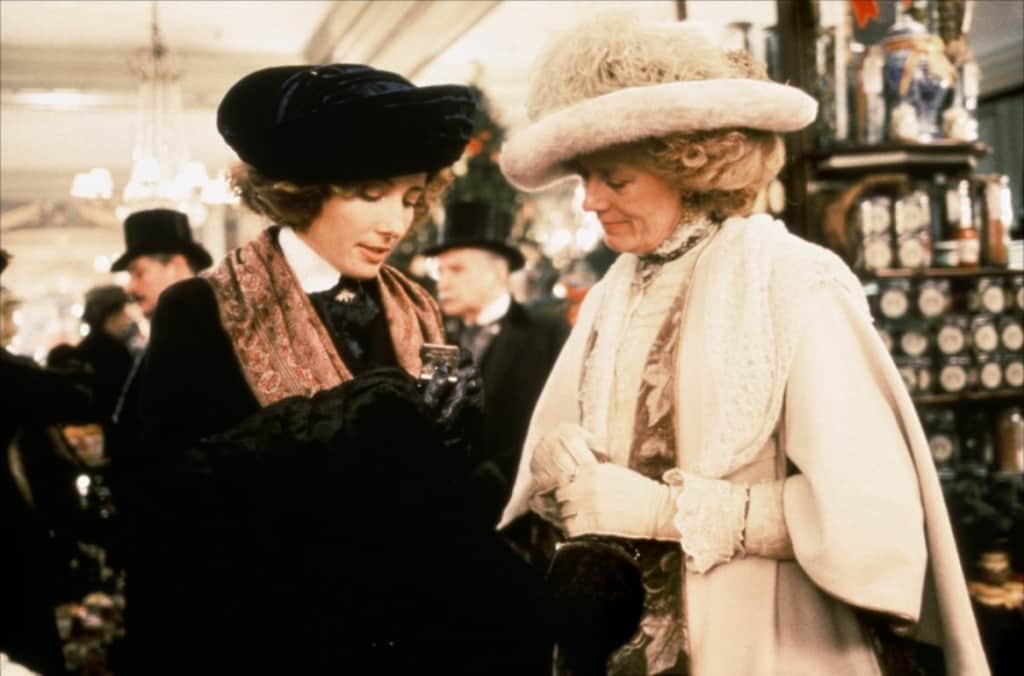 The production values are extraordinary.  It is amazing what Merchant was able to do with relatively tiny budgets.  Ivory seems to know how to create incredible shots, both the long-shot and key close-ups, to showcase the setting, the story, and the actors’ character inhabitation.  Jhabvala’s script sparkles and handles the interconnected stories with great synchronicity.  For all this, the Merchant-Ivory films are known, but they are perhaps best known for the remarkable acting masterclasses given by the principal characters, especially.  Thompson won most major acting awards, including the Academy Award, and it was a well-deserved recognition for her work as a woman of incredible intelligence and independence.  Hopkins, here so unsympathetic in most of the film, earned a welcomed Oscar nomination for playing a man of means but of little substance.  Bonham Carter was, in my estimation, sadly overlooked by awards groups for she represents fire in a world of manners she cannot understand nor tolerate.  Finally, Vanessa Redgrave is so good that though she dies relatively early in the film, her presence remains throughout; it is a rare talent that can accomplish that.  Finally, every other actor is perfectly cast and acts as if their characters are just as important as the “leads.”  In doing so, they add brilliantly-colored threads to the tapestry of Howards End.

Few other films make class distinctions so vivid and so simultaneously entertaining and thought-provoking.  The film tackles not only class, but morality, love, loss, renewal, forgiveness, trust, and betrayal – and it does it all with magnificent language.  It is one of most “literate” films you’ll ever see.  Having read E. M. Foster’s Howards End, I can attest to how great the adaptation is of a great book.  It is an incredible film in every conceivable way and to be highly recommended, even for those who are not fans of Edwardian England costume dramas – it is just that good.  If you have not seen it in the 20 years since its release, please add it to your must-see list; I do not think you will be disappointed.