I have spent considerable weeks trying to decide which Alfred Hitchcock masterpiece to write about in our 10/10 feature.  As is now obvious, I have yet to pick one and instead chose to write about the French thriller, Les Diaboliques instead.  The 1955 classic was directed by Henri-Georges Clouzot and is based on a novel by Pierre Boileau and Thomas Narcejac.  Hitchcock new a great piece when he saw it and went after the original novel but Clouzot beat him to the rights by just hours.  Hitchcock received a terrific consolation prize, though; Boileau and Narcejac wrote the novel on which one of Hitchcock’s best films was based – Vertigo – and some reports say that the novel was written specifically for Hitchcock after he lost the rights to their earlier novel.  Like any thriller, the film has certain implausible moments that make it “work” for the audience; however, it is so well-written, well-acted, well-directed, well-photographed, etc., that we can forgive an implausibility or two and just sit back and enjoy the brilliantly-made suspense film.  I felt the need to write it about, I think, largely because it is so often compared to Hitchcock’s best films and it deserves to be seen and appreciated on its own without that comparison. 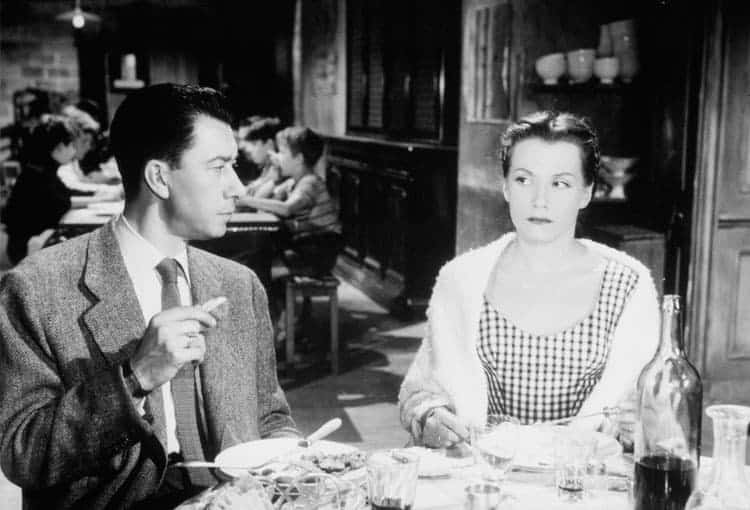 Les Diaboliques is primarily about a love triangle gone wrong.  Paul Meurisse plays Michel Delassalle, the headmaster of a second-rate boarding school for boys in a French province.  His wife, Christina (Véra Clouzot), actually owns the school but her role is as a teacher and not as a headmistress.  The fact that he runs the school is just one of the many examples of how he controls her and her property.  Simone Signoret provides the third key player as Nicole Horner, a teacher with whom Michel is having an affair.  He is abusive toward her as well, more physically than anything else it seems.  Everyone knows about the affair – Christina, the school staff, and quite likely the schoolboys themselves.

Christina and Nicole hatch a plan to kill Michel, thus freeing both of them from his torturous snare.  The two make an unlikely pair.  Christina is dark-haired and delicate – delicate in both in physical appearance and emotional strength.  She suffers from a heart condition which could kill her at any minute which heightens the already suspenseful film (in reality, Véra Clouzot also suffered from a heart condition of which she tragically died in her mid-40s; she would only appear in three films, all of them directed by her husband, Henri-Georges).  Here, her fragility only adds to her wounded-bird presence and behavior.  Nicole, on the other hand, is a full-figured, physically and emotionally powerful presence who seems to tower over her lover’s wife.  Where Christina is quiet and mousey, Nicole is assertive and strong-minded.  Signoret – who would become more famous when she won the Oscar for Best Actress for 1959’s Room at the Top – plays Nicole as a French blond bombshell who is tough as nails, even to the point of being icy. 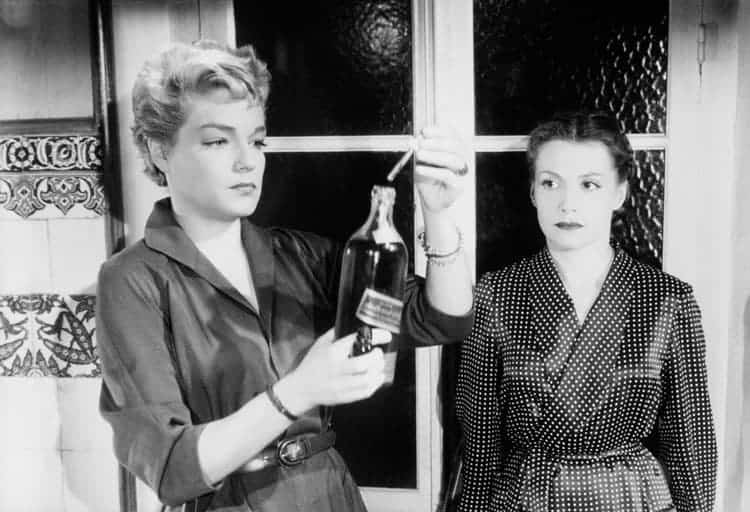 They come together in a fascinating scene or two in which they plan Michel’s death.  While Christina is almost beside herself in the planning stages, Nicole is cool as a proverbial cucumber and seizes every opportunity to bolster Christina’s shaky confidence.  They carry it out by sedating him and then drowning him in a bathtub at Nicole’s apartment.  They place his body in a trunk and bring it all the way back to the school, dumping the corpse in the school’s unused and dirty swimming pool.  They actually hope his body will be discovered by one of the teachers or students, and everyone will think a terrible accidental drowning occurred; he did, after all, drown and a routine autopsy would so show.  Clouzot creates incredible tension around the body’s existence in the pool.  It helps that the pool can be seen from Christina’s classroom window.  Each day, she teaches with his dead body yards away and with each passing day, she teeters on the edge of becoming completely unhinged.  Nicole, on the other hand, continues to appear unruffled and does her best to keep Christina from going crazy and admitting to someone what they have done.  Nicole is worried about Christina for good reason; the latter strikes the unwelcomed attention of a police inspector named Fichet (Charles Vanel) as she goes about the business of pretending to look for Michel who has been named by her as a missing person. 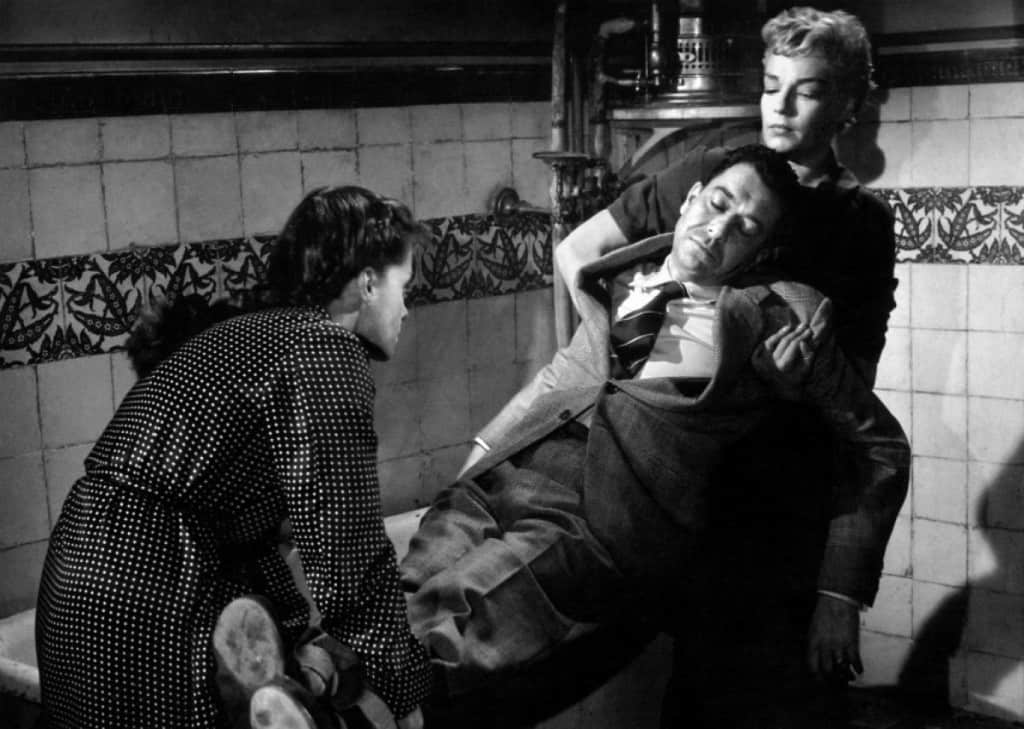 Two wonderful tension-building events occur that ratchets up the already-suspenseful film.  First, the suit Michel was wearing when the women killed him is delivered from the cleaners to the school.  Second  – and it does not matter why –the pool is drained.  Imagine the surprise – to Christina, Nicole, and the audience – when Michel’s body is not in the drained pool.  What could have happened to him?  Who else knew about his whereabouts?  What does the police inspector know, if anything, about Michel’s disappearance?  These are questions that plague both the women and the audience.

Clouzot and his actresses manage to have the audience side with the murderesses and their act.  For Christina, it is her only way out of a terrible marriage to a tyrannical man.  For Nicole, it is a way of physically removing Michel from her life and simultaneously cleansing any feelings of guilt she has had for perpetuating the innocent Christina’s tortured state of existence.  We genuinely feel for both women and so when the pool is drained and Michel is not where they left him, our hearts nearly come out of our chests with worry, panic, and fright.  We are complicit in the women’s act, so complicit that we either (a) want Michel’s body to be found as soon as possible or (b) want his body to never be found – whichever ensures the ladies’ safety.  It is a great conundrum Clouzot creates.  Without a body, the police continue to search for him but with a body, there is the possibility that the police will discover how he died.

The revelation of what happened to Michel’s body does come and it comes in one hell of a great scene.  As much as I would love to write about said scene, I have decided against spoiling the film’s climax for those of you who have not seen the film.  It is such a great twist toward the end, Clouzot became one of the first filmmakers to include a “do not tell anyone about the ending” plea in the reel itself – something Hitchcock would do several years later when he released Psycho.  Audiences kept their silence and so audiences were consistently shocked by the film’s fateful dramatic zenith. 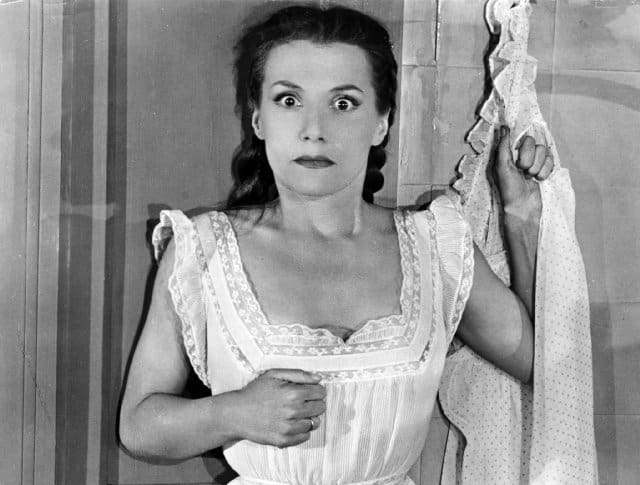 All of this is set against the banal background of the boarding school with a few boys playing crucial roles in the story’s unfolding.  Clouzot also wisely uses the other teachers as critical supporting players.  Christina and Nicole’s crime seems all the more incredible when placed in a school setting.  The young boys represent youthful innocence and the teachers represent a normal even boring state of being – if only they knew the truth behind the mysterious disappearance of the school’s headmaster.  The setting is quite like that of Hitchock’s own favorite film, Shadow of a Doubt, in that it provides a setting – both literal and figurative – in which something like a murder simply would not happen.

As I mentioned in the first paragraph, there are a couple of implausibilities that nitpickers could, well, nitpick.  But no suspenseful thriller is really without them by the nature of the storytelling required by the genre.  A filmmaker like Clouzot here – and/or even the “Master of Suspense” Alfred Hitchcock – has to rely on a few tricks to make the magic work.  Clouzot’s ever-increasing tension of storytelling coupled with two crucial and ultimately mesmerizing performances by his wife Véra and Simone Signoret takes the film on just the right trajectory – the film can thus be forgiven for moment at the end that does not quite wash when compared to what has come before (you know to what I am referring if you have seen it, and I am sure you will catch it when you do see it if you have not already viewed it).  No film is truly perfect.  Take Hitchcock’s Psycho – it would have been as near to perfect as any film could be if he had left out the explanation of Norman’s psychosis and relationship with his dead mother.  Still, we hold the film in high regard despite the inane expository moment of psychoanalysis included toward the end.

I said this film should be viewed without comparison to Hitchcock’s work, but the comparisons are inevitable.  I believe Les Diaboliques holds its own in comparison with Hitchcock’s best efforts such as Notorious, Strangers on a Train, Rear Window, Vertigo, and Psycho.  Given Hitchcock’s reputation, many readers have undoubtedly seen some if not all of his work.  However, American audience’s general lack of interest in foreign films may have caused even the most cinephilic of Film Pulse’s readers to have overlooked this French gem.  I recommend seeing it sooner rather than later and adding to your collection if, like me, you have a real admiration for truly suspenseful fare.