The year was 1999.   Star Wars returned to theatres.  Audiences were blown away after being introduced to Neo and The Matrix.  The world was shocked that they “see dead people.”   The Blair Witch gripped moviegoers.   1999 also saw the release of some great animated feature films.   Toy Story 2 garnered raves because it was a rare sequel that was far superior to the original.  Tarzan swept audiences away on a fantastic adventure ripped from the pages of Edgar Rice Burrough’s classic pulp novels.  South Park: Bigger, Longer & Uncut was simply one of the funniest films of the year.   However, there was one film that didn’t achieve the level of financial success that the aforementioned animated features did.  It did, in my opinion, leave those three in its wake when all was said and done.   It’s a family film.  It’s an adventure film.  It’s a science fiction film.  Not only that it’s touching, funny, smart, moving and never loses its luster after repeated viewings.  In fact, I had just finished watching it for the umpteenth time just before I sat down to write this.   I am speaking of Brad Bird’s first feature film.  A film that didn’t connect with audiences when first released but has since achieved cult status.  The film is The Iron Giant.

Based on the book “The Iron Man” written by Ted Hughes, Brad Bird has fashioned a film that not only captures the period so well, 1957, but also evokes the great monsters movies of that era.   Roger Ebert said that from time to time you forget that these are moving drawings.   He was correct in that assessment because the story and character are so rich and engaging that you are, pun unintended, drawn into their world and environment.   This film could have been made as live action but it would have been pretty damn expensive but it actually works best as an animated feature.

One thing I love about this film is the characters.  They are well realized and feel real.    Hogarth Hughes is every-kid.   Who hasn’t been or can’t remember ever being like him?   He is not written like a typical “movie” kid.  He’s smart, funny, quick on his feet and has a solid moral compass.   Annie Hughes is a single mother who nurtures her son’s imagination but still does her best to keep him grounded.   Where most on-screen moms would run with their kid in tow she stands tall with her son.   Dean McCoppin is a local artist who is a very cool cat with a dry wit and sarcasm.   His introduction where he has an encounter with one of Hogarth’s furry friends is quite hysterical and his matter-of-fact reaction to events at the lake are priceless.  Kent Mansley is not your typical villain.  He’s an FBI agent who seems to work for an X-Files type of section at the bureau.  He’s no pushover.  He’s smart and relentless.  You love to hate him and really love to see him get foiled by Hogarth.    I particularly enjoyed the stand off/stare down between Hogarth and Mansley or how Hogarth thwarts him with a bar of Coco-lax.  Finally, we have the Iron Giant.   A mechanical being who has no memory of where’s he’s from or what his purpose is.  You can see and feel his awe and wonder at this new world he has found.

None of these characters could have come to life if not for the impeccable voice work that the talented cast had provided.  Young Eli Marienthal is excellent as our hero Hogarth.  I’m sure he was just being himself when he performed it but you really believe that he’s a boy that grew up in the fifties and you can feel his sense of wonder.  A sense of wonder I knew I had when I was his age.   He has many great scenes but I particularly loved the scene where he has his first espresso.  I wonder if Bird actually gave him one to add to the scene.  Christopher McDonald steals the film with his performance as Kent Mansley.  He comes off as a great villain and a fine foil to Hogarth.   His comic timing is often hysterical from his reaction to discovering half of his car is missing to how he treats the locals.  He is equally menacing especially during a dark interrogation scene.   Jennifer Aniston is very good as Hogarth’s mom.  Her inflections and tone speak volumes about how much she loves her son and that she supports his endeavors.  Just listen to the discussion at the beginning when he brings a new pet to the diner she works at.   Harry Connick Jr. is also solid as Dean McCoppin.  He’s another one that kinda steals the movie.  His reactions to all the events going on around him are pretty funny and in some instances quite dramatic.  Finally, Vin Diesel.  Yup, he provides the voice for the title character himself.   With minimal dialogue he has managed to give the Iron Giant his soul.   His inquisitiveness, his confusion and his remorse comes through loud and clear.  The Giant’s reactions to some shocking events are quite heartfelt thanks to how Diesel delivered the lines.   Bird rounds out his cast with great character actors such as  James Gammon, Cloris Leachman, John Mahoney and M. Emmet Walsh.   Not to be forgotten are Frank Thomas and Ollie Johnston in a nice little cameo appearance.  Collectively they bring reality to the two-dimensional animation that makes up this film.

Speaking of animation, I love the look of the film.  It looks and feels like the 1950s.   The style is reminiscent of old Tex Avery cartoons as opposed to the Disney style of 2D animation.  In particular I love that Bird decided to use a scope canvas.   With a wider aspect ratio this looks impressive on the big screen.   I’ve only had the opportunity to see this twice in the theatre, once when it opened and again at a reunion screening last year, and it looked fantastic.   The 2.35 aspect ratio is seldom ever used for an animated feature and it’s reason enough alone to celebrate when someone does use it.   Brad fills his frames quite nicely and the action sequences truly benefit from the wider canvas.  In addition, some of the more dramatic moments actually have more weight thanks to the wider aspect ratio.

Working from a screenplay written by Tim McCanlies and his screen story, Bird masterfully directs the film like he’s been directing all his life.   The film moves along fluidly and never misses a beat or contains a false note.   He also pay a witty homage to the times thanks to a great “Duck and Cover” film that is shown to a classroom full of students.   Not to be outdone there’s a call back to that film that is quite hilarious and tragic at the same time.  As I mentioned the film feels like a classic 1950s giant monster movie but it is played quite serious and features some stellar acting, certainly traits that the genre is not known for.  Okay, perhaps Them is one of the rarities.  Bird gives the film a certain charm that never wanes.  You are sucked into the lives of these characters and are quite concerned for their safety when the film reaches its final act.   It’s that concern that allows you to feel the danger, the emotion and the gravity that these characters face.  Not bad for a film made up of millions of drawings. 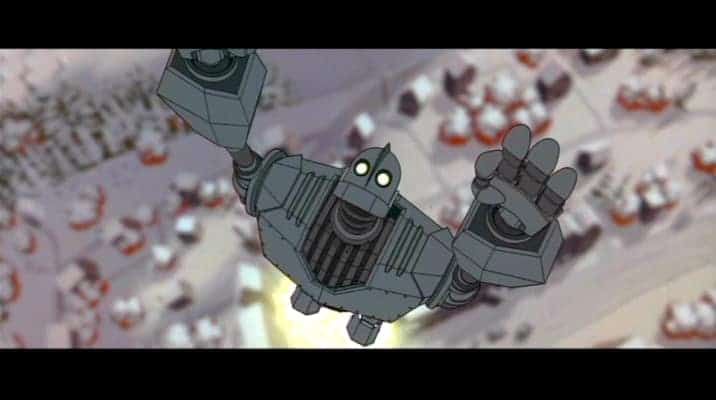 Ultimately it’s the story of Hogarth and the Giant that makes this film so endearing.   From Hogarth’s rescue of the Giant, their many adventures while trying to hide him to the exciting conclusion their story is riveting.  As the film progresses the Giant begins to recall what he is and this puts everyone in grave danger.  The Giant doesn’t want to be that way but it’s in his programming.   Thanks to Mansley’s meddling the Army is brought in and this exacerbates the situation.   You fear for everyone’s lives but also fear and feel sorry for the Giant.   After Mansley pulls off something that will prove catastrophic two of the film’s most memorable and touching moments occur.   Both are call backs to scenes that appeared before and they are quite moving.   After the second one I distinctly recall sighing and having a huge smile on my face.   I was quite touched. Not since Disney’s Beauty and the Beast had I been so emotionally drawn into an animated features story.  When the film ended I was grinning from ear to ear.   This was one of the best films of the year.

Brad Bird’s film is a wonderfully told adventure that features rich characters and a riveting story.   Solid performance, a well written screenplay, great score and animation brought life to the 2D images on screen.   It’s a cinematic classic that has always stuck with me and it’s hands down Vin Diesel’s best film.   In 1999, The Matrix reminded me of what great, original science fiction was like.  The Mummy gave me an adventure that reminded me of what it was like to see Raiders of the Lost Ark for the first time.  The Iron Giant reminded me of what it was like to be a kid again.  For that reason alone I would have given this film a 10 out of 10.    However I gave it the highest marks because it’s a classic, a masterpiece and a wondrous calling card from a man who would bring us even more great features, animated and live action, like The Incredibles and Mission:Impossible-Ghost Protocol.

Remember “You are who you choose to be.  You choose.”

PS…did anyone notice The Iron Giant ending in The Dark Knight Rises? J