For the two people who have not seen this movie, there are spoilers ahead.

The big winner at the Academy Awards for 1991 was The Silence of the Lambs.  Arguably never before had the Academy recognized such a dark, suspenseful thriller – indeed, it was the first “horror” movie to be named Best Picture.  It also won for Best Actor for Anthony Hopkins, Best Actress for Jodie Foster, Best Adapted Screenplay for Ted Tally, and Best Director for Jonathan Demme.  No film since 1974’s One Flew Over the Cuckoo’s Nest had a film won the “big five” and no film has done it since Lambs.  Re-watching the film this week, it is easy to see why this film became an instant classic and one of the most talked about films in history.  The script, direction, and performances are outstanding, but so is every other aspect of the film from score to editing and production design to cinematography.  It has lost none of its power over the last 20 years, easily remaining one of the best films ever made.

Making great horror and/or suspense and/or thriller films is notoriously difficult; that is why there are so few of them in 100 years of motion pictures.  The Silence of the Lambs began as a terrific novel by Thomas Harris about extremely interesting characters from the principal leads to the supporting individuals.  Lambs tells the story of Clarice Starling (Jodie Foster), a trainee at the Federal Bureau of Investigation who wants to put behind her rural roots and memory of her father’s untimely death and become a strong agent in a male-dominated world.  Her chance comes when the head of the Behavioral Science division, Jack Crawford (Scott Glenn), approaches Clarice with a unique and ultimately frightening proposition.  He wants her to visit the notorious Dr. Hannibal Lecter (Anthony Hopkins) – better known as “Hannibal the Cannibal” – in a psychiatric prison where he is being held by Dr. Chilton (Anthony Heald) and see if he is willing to shed light on the F.B.I.’s search for a serial killer nicknamed “Buffalo Bill” (Ted Levine).  The film wisely focuses on Clarice and gives us just enough of the “boogeymen” in the form of Lecter and Bill to keep things terrifying and intriguing.  The drama is ratcheted up when a United States Senator’s (Diane Baker) daughter, Catherine (Brooke Smith), is taken by Buffalo Bill and the characters and audience know that it is just a matter of time before Catherine is killed and skinned like the others.

One of the film’s greatest choices is to focus on Clarice and tell the story from her point of view.  Tally’s script and Demme’s direction wisely limits the audience’s encounters with Dr. Lecter.  Although he only has roughly 20 minutes of screen time, his presence is felt throughout the film.  Hopkins creates a distinct voice patterned after Hal from 2001: A Space Odyssey and, it seems, a bit of Katherine Hepburn.  His interactions are primarily with Clarice and their initial meeting is the stuff of film legend.  After Clarice walks past several cells with mentally unhinged prisoners, she finds Lecter just standing in his cell with its glass front.  This was apparently Hopkins’ idea – that Lecter be discovered just standing there, silently and still, because he could smell her coming down the corridor.  He was correct that it was more frightening to find this sociopath so calm and reserved than in some state of mania.  The way this scene is written and performed is absolutely perfect as Lecter needles Clarice, mocks her by imitating her West Virginia accent, shows his dominance and superiority, psychologically profiles her, and more.  And just as she is almost running away in fear after what she assumes will be their first and last meeting, Lecter shows he cares by giving her a hint as to how she can find Buffalo Bill.  Thus begins their “affair” of sorts (“People will say we’re in love, Clarice.” – Lecter purrs in a later meeting with Clarice).  Hopkins plays these scenes with such charm, we root for him and when he finally escapes – which he does in a brutal and clever way – we cheer a bit inside. 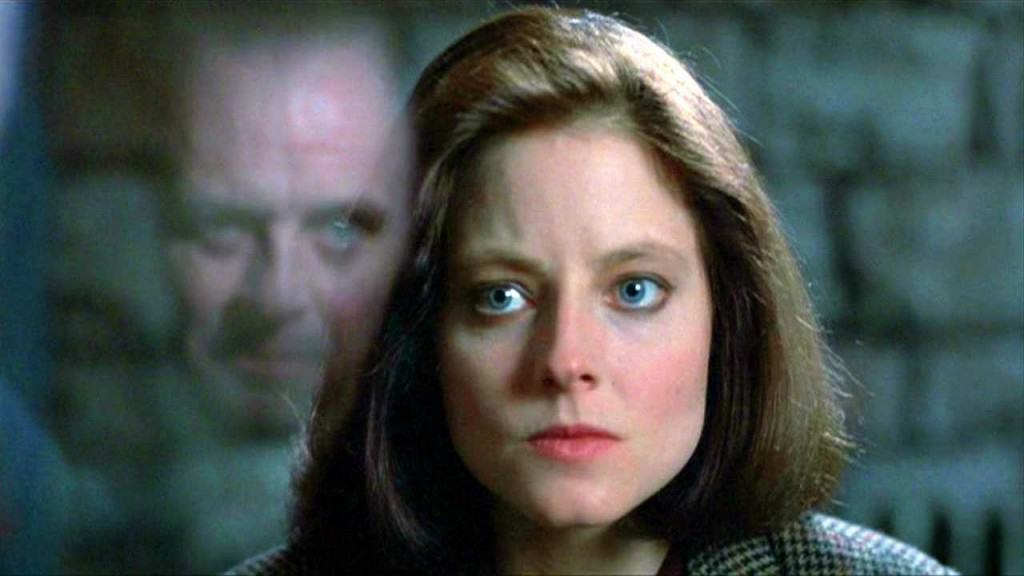 The film also wisely shows us just enough of Buffalo Bill to reveal both his psychotic nature and his gender dysphoria; he is a transsexual who wanted to have sex-reassignment surgery but, as we learn from Lecter, Bill was denied after failing the necessary psychological tests.  As with Lecter, some viewers will also feel a certain sympathy for Bill whose real name is Jame Gumb, especially in those moments when he is shown caring for his pet poodle and in the split-second when he almost cares for his prisoner, Catherine.  Levine creates one of the most indelible villains in movie history.  Through various means, he has captured several overweight women, keeping them in a well in his basement while he starves them so their skin will be easier to remove and be pliable for sewing into the dress he is making to turn himself into a woman.  It is rare that a film has one fascinating villain, but Lambs manages to have two.  Both are incredibly different, highly-specific characters and both are brilliantly portrayed by Hopkins and Levine. 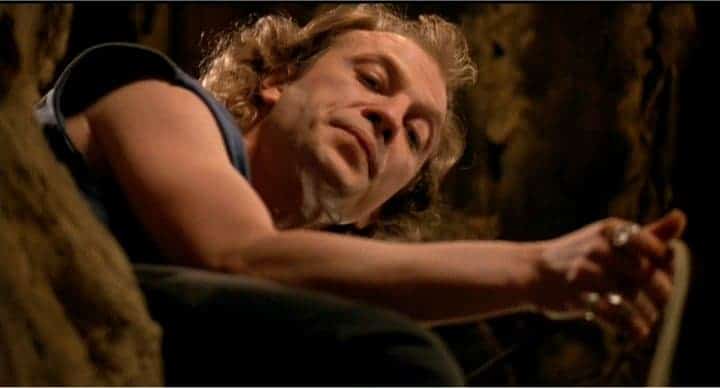 The straightforward plot summarized above would be enough to create a strong film.  What Lambs manages to do is create a multi-layered movie that is more than a young-F.B.I.-trainee-hunts-for-killer-with-another-killer’s-help story.  It is about a woman’s ambition – often reckless ambition – to break into a male-dominated world.  It presents an odd and special relationship between an F.B.I. agent and a notorious psychopath.  It shows us another interesting relationship between Clarice and her boss, Crawford.  It elicits sympathy for a cannibalistic killer and perhaps even outright joy for his escapades which we feel primarily because he is so intelligent and charming and because he helps the heroine in her pursuit of a sadistic murderer.  And yes, it does even more.

There are so many memorable scenes, it is difficult to pick among equals, but I will notate a few:  Lecter’s dressing-down of Clarice in their first visit; Clarice’s recounting of how she tried to save a lamb from slaughter when she lives on a relative’s sheep farm; Lecter’s salacious words to Senator Martin about her kidnapped daughter; Lecter’s ingenious, musically-rich escape from his second cell; the analysis of the deaths-head moth by two entomologists, including one who hits on Clarice; Bill’s creepy dance in front of his mirror; Bill and Catherine’s interaction when he refers to her as “it” and tells her to put lotion on her body to make her skin more supple for when he removes it to add to his ever-growing skin dress; the wonderfully-edited sequence in which Crawford thinks he is at Bill’s door when in fact Clarice is actually about to come face-to-face with the serial killer; and Lecter’s phone call to Clarice that ends the film.

As I mentioned above, there is not a weak aspect to Lambs.  The taut script manages to make something spectacular out of the oft-filmed search for a serial killer story.  Demme’s direction is superb; normally, I am not a fan of too many close-ups, but here there are just right as they add to a kind of claustrophobic feeling as well as showing us what is going on “behind the eyes” of the characters.  The score is just right; it never gets in the way and is cues what it needs to in the most appropriate ways.  The editing is extraordinary, especially in one of the most famous intercut segments in movie history:  Crawford’s F.B.I. attack on what he believes is Buffalo Bill’s residence and Clarice’s happening upon the real residence in what she thinks is going to be a routine questioning.  With these and other essential elements in place, the film then allows for some of the most extraordinary performances in film history.  They could have been clichéd – Foster as the female F.B.I. trainee, Hopkins as the intellectual cannibal, Levine as the disturbed serial killer, Glenn as the F.B.I. establishment guy, Smith as Buffalo Bill’s latest victim, Heald as Lecter’s jailer, and the rest – but they are terrifically drawn, detailed characters that defy nominal descriptions.  Few thrillers can still thrill after the first viewing, but The Silence of the Lambs can and does continue to do so after more than 20 years in filmdom.