British writer and director Mike Leigh is one of the world’s most acclaimed filmmakers.  He has never made a bad film and, in fact, has made some truly brilliant and masterful movies such as Naked, Secrets & Lies, Topsy-Turvy, Happy-Go-Lucky, and Another Year.  I had a difficult time choosing among Leigh’s remarkable films – the preceding would all be 10/10 in my opinion – but I settled on Vera Drake from 2004.  Leigh is perhaps best known for how he creates the script, or more accurately, how he does not create a script.  He works with each actor individually and separately from the other actors.  Each actor knows only their character and while they may have some idea of the story from their character’s point of view, they do not know the whole picture and only meet for the first time when they are in front of the camera.  Preparations can take many months as characters are created from their birth to the time period presented in the film.  As with all of his movies, the characters in Vera Drake are fully-formed human beings who are as real as if Leigh were filming a documentary.  No other contemporary director has so perfectly captured a particular socioeconomic class; in Leigh’s case, that is the lower echelon of the British class system (one exception is Topsy-Turvy which wonderfully recreates opera masters Gilbert and Sullivan). 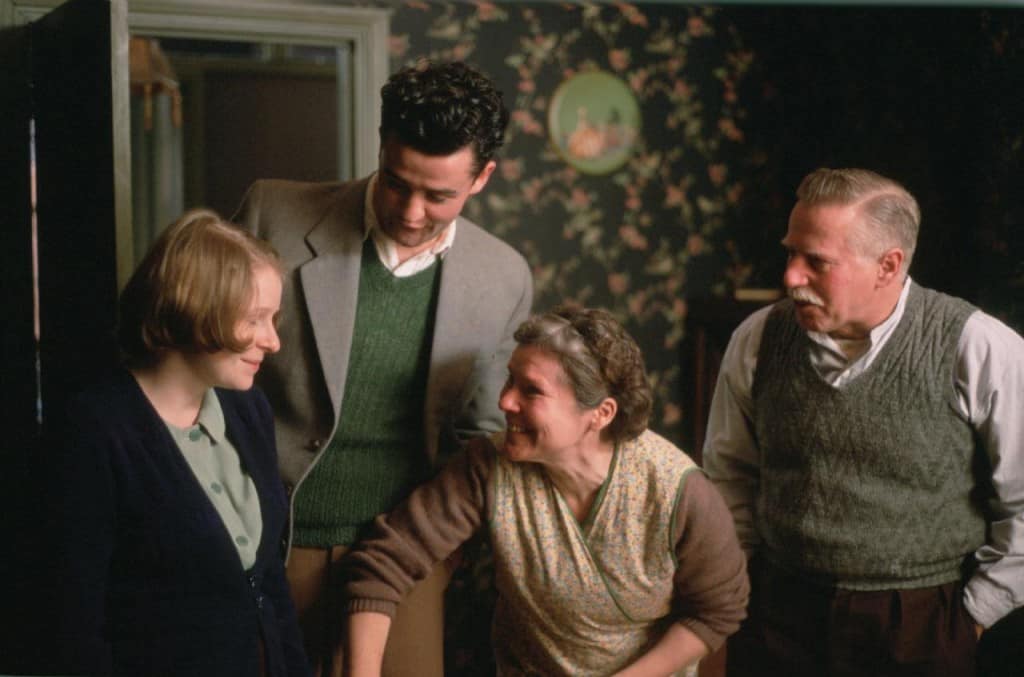 The ideas behind many of Leigh’s films come from personal experiences.  Vera is based on a local woman who performed illegal abortions in the 1950s.  The film primarily focuses on Vera (Imelda Staunton) and her family.  Vera’s husband, Stan (Phil Davis), works with his brother, Frank (Adrian Scarborough), repairing automobiles.  Vera’s grownup children – Sid (Daniel Mays) and Ethel (Alex Kelly) – still live at home, something that was the norm for that time period and that socioeconomic class.  Neither Sid nor Ethel would have made enough money in their respective trades to move out and live on their own.  Frank and his wife, Joyce (Heather Craney), are of the same class, but lead a somewhat more extravagant lifestyle given Joyce’s tastes.  Reg (Eddie Marsan) will join the family after dating Ethel and ultimately marrying her (everyone should see the often comic Marsan’s startling, semi-frightening, and complex performance in Leigh’s wonderful Happy-Go- Lucky).  Vera’s invalid mother (Sandra Voe) lives with the family and is taken care of by the Drakes with Vera doing most of the work.  Lily (Ruth Sheen) is not part of Vera’s family, but as her life-long friend, she plays a key role in Vera’s life and indirectly in the life of Vera’s family.  The scenes showing the Drakes enjoying each other and leading joyous lives before the crucial moment of Vera’s arrest for performing abortions are wonderfully entertaining.

The film overlaps a wealthy, upper-class story that runs parallel to the Drake’s existence.  We follow Susan (Sally Hawkins) who is the victim of what we know as date-rape and subsequently becomes pregnant.  She seeks advice from her friend (Fenella Woolgar) who provides her with the name of a doctor who will ensure the pregnancy is terminated.  Vera works for Susan’s mother (Leslie Manville) and had Susan been of a lower class, she could have been one of Vera’s “girls” who, as Vera says, are “in trouble” – girls who Vera helps end their pregnancies. 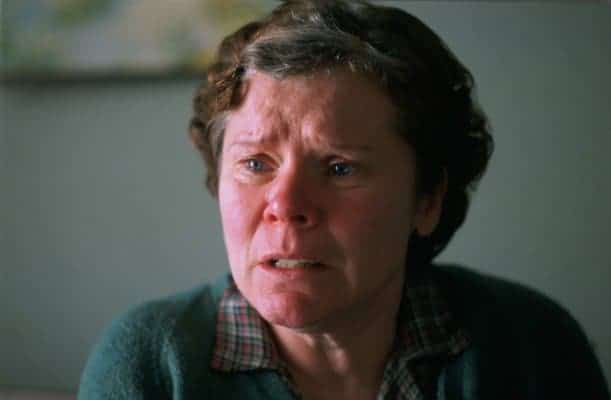 Vera Drake shows us a few women – all of the lower class – for whom Vera performs abortions.  Lily is the abortion-broker – she is the person known in the community as the go-to person when a woman finds herself in an unwanted pregnancy.  Carefully watch the scenes between Vera and Lily – Lily acts almost like an abortion pimp, getting paid for putting young women in touch with Vera.  Vera sees none of that money and does not know Lily is even being paid; watch what happens when Vera learns of Lily’s profiteering.  It is a marvelously realized scene.  The abortion scenes between Vera and the various women are incredibly moving and realistic.  Pay close attention to how Vera acts, how normal it all seems, and how unbothered Vera is by the fact that she is wittingly breaking the law.  There is a young woman living alone who is scared of both being pregnant and of terminating the pregnancy.  There is a married woman with several children who simply cannot afford to have another child.  Finally, there is a woman whose mother is by her side when Vera comes calling.  This young woman will face complications and, if not for her mother’s intervention, would have died alone in her flat.  It is when this final woman ends up in the hospital that police become aware of Vera’s activities. 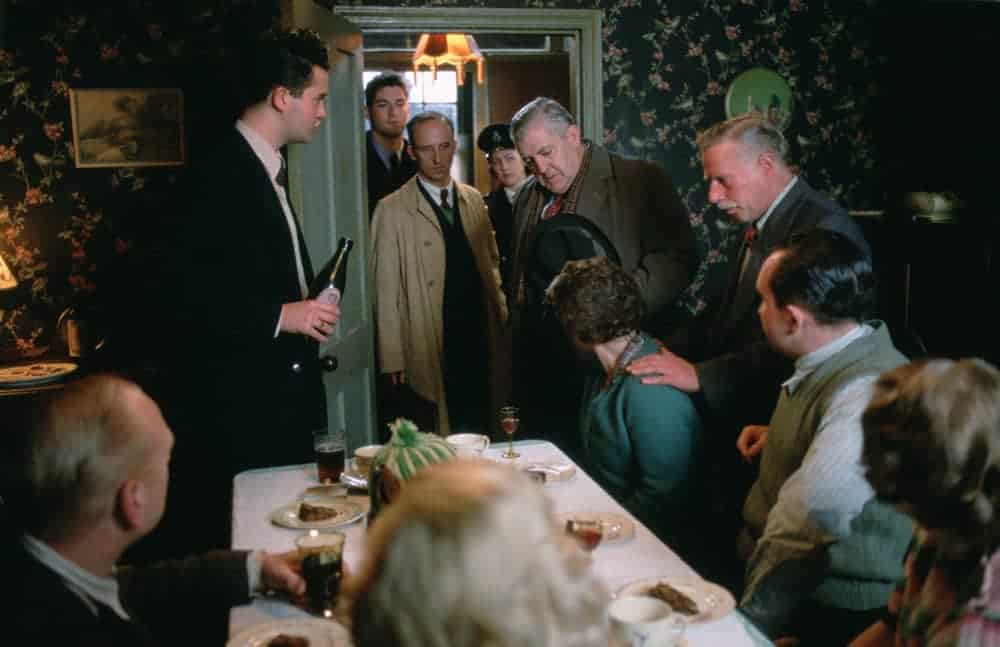 As previously mentioned, the actors created their characters with Leigh and none of the cast members playing Vera’s family knew of her illegal activities.  When the police arrive at the Drake’s flat, Staunton knows why they are there but the other actors have no idea that she was playing an abortionist.  Their reactions to her arrest are caught for the first time on camera.  It is almost unheard of for a director and actors to work in this way, but boy does it ever work in creating memorable moments from Leigh and his cast.  Vera’s arrest and the various scenes that follow at the police station and jail are extremely powerful.  So are the quiet scenes when the family is together, minus Vera, who is sitting in prison awaiting her appearance before the judge (Jim Broadbent).  Watch the scene when Vera tells Stan why she has been arrested.  Few cinematic moments are as perfectly acted; Staunton will break your heart as she breaks her on-screen husband’s heart and her own. 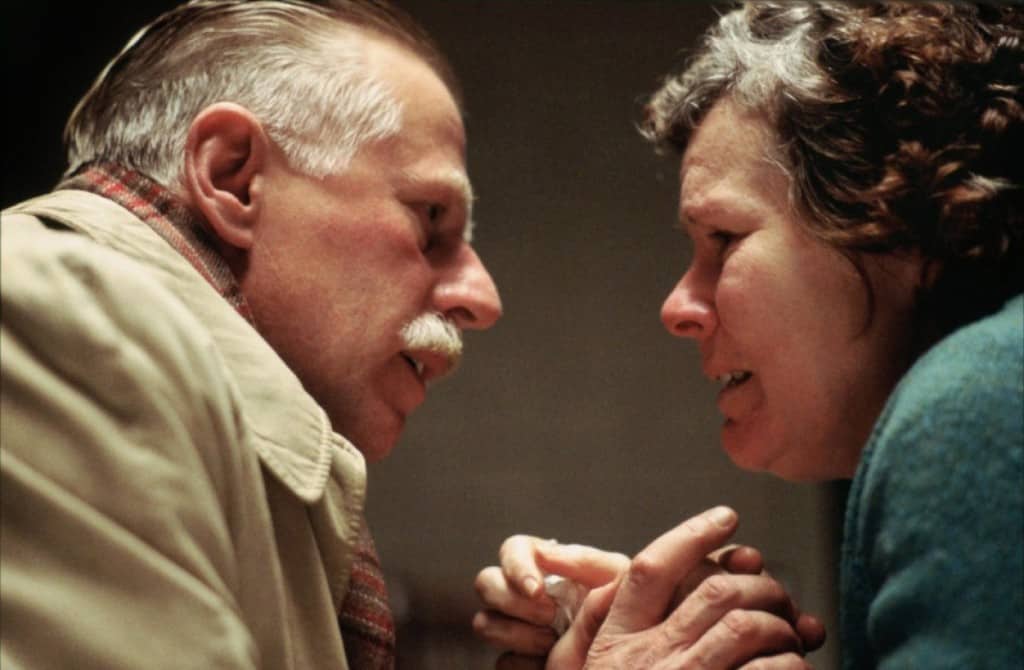 Following up on that last sentence, I believe anyone who sees this film will agree that Vera Drake includes some of the best performances ever committed to screen.  Everyone is pitch-perfect.  Each scene is remarkable and I felt like I was there, silently witnessing the Drake family as their world falls apart.  If not for Hilary Swank’s strong work in Million Dollar Baby the same year and the Academy’s penchant for rewarding younger actresses in the Best Actress category, Staunton could have taken home a well-deserved Oscar for her brave, understated performance.  Vera Drake is deeply moving and will speak to you regardless of your personal feelings about abortion.  The film is a great introduction to Mike Leigh’s work; if you are not familiar with his movies, Vera Drake should make you want to see them all.  For me, please have yourself a Mike Marathon sometime; you will be treated to equal parts comedy and drama in one four-star film after another.