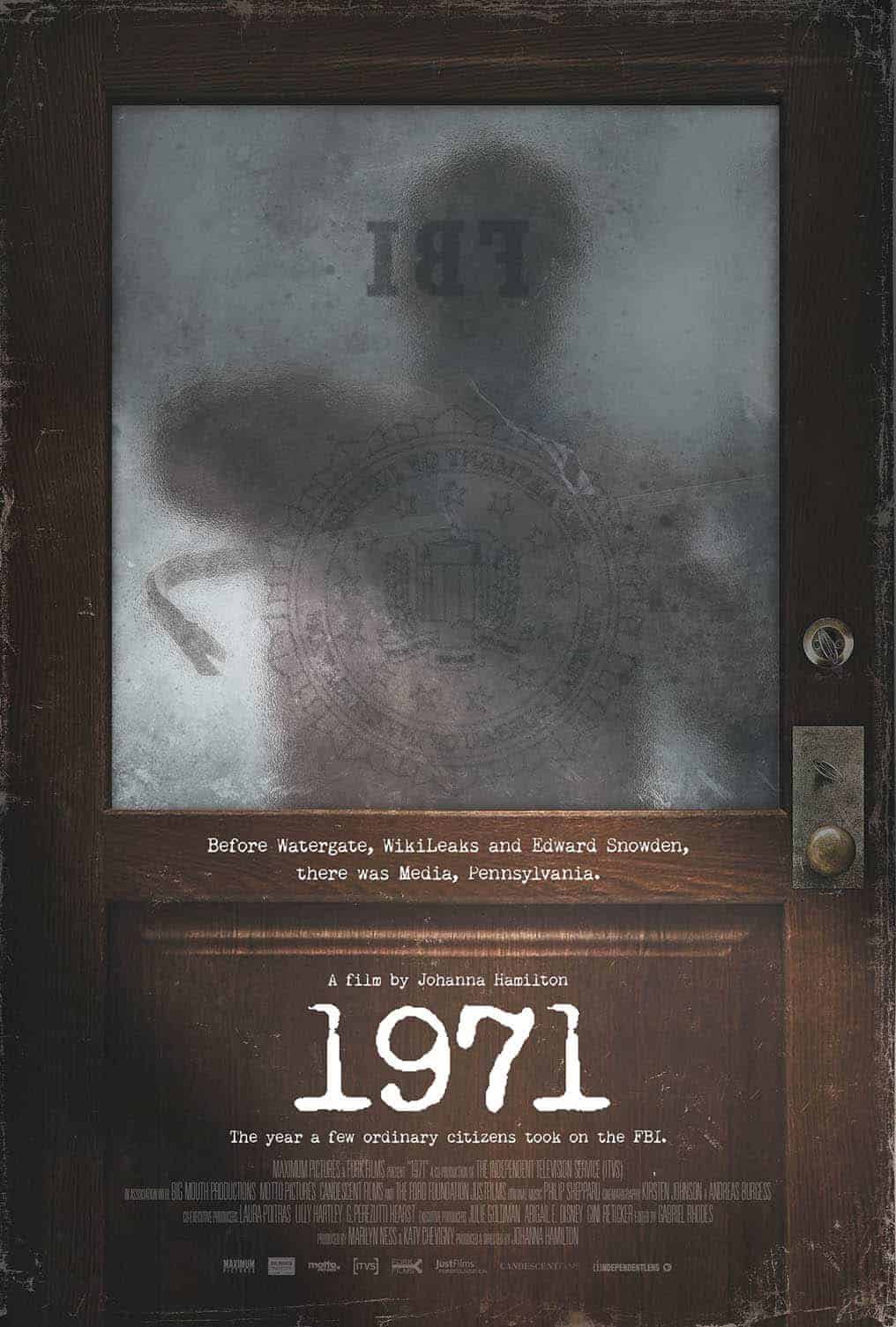 1971 is one of the more interesting documentaries I have seen in some time.  Largely told by the people involved with some recreations when necessary, the film tells the story of eight individuals’ break-in to a local FBI field office in Media, Pennsylvania, in 1971.  What the uncovered would cause more embarrassment to and distrust of the Bureau though not bringing it or its long-time chief J. Edgar Hoover exactly to its/his knees.  The film’s opening includes a statement about Edward Snowden’s recent high-tech appropriation of numerous National Security Agency (NSA) documents as well as Daniel Ellsberg’s release of the so-called “Pentagon Papers” in 1971.

The Snowden episode is still quite fresh in people’s minds and he has been called everything from a “traitor” to a “patriot.”  His fate remains uncertain as country after country has denied him asylum; if he is ever brought to the United States, he will undoubtedly be tried, found guilty, and serve decades in prison.  Many people still remember the “Pentagon Papers” case largely because it has been taught in school since the early 1970s due to a major U.S. Supreme Court case about the First Amendment’s freedom of the press.  Also, both Snowden and Ellsberg were known to have committed their respective crimes.  As avid a student of such stories as I have been much of my adult life, I must say I never knew of the Media, Pennsylvania break-in or what it led to.  A significant explanation is that none of the eight people involved were ever caught for their actions.

The documentarian interviews four of the eight members of the self-proclaimed “Citizens Commission to Investigate the FBI” (hereafter, the Commission).  The individuals involved explain their actions as being born of their collective opposition to the Vietnam War.  The Commission knew that the FBI was involved in the suppression of anti-war sentiment and they suspected FBI agents’ infiltration of “radical” organizations – something Hoover had been instructing the Bureau to do for decades.  What the Commission was looking for was proof.  They decided to break in to an unprotected field office in the town of Media on the night of the famous boxing match between Joe Frazier and Muhammed Ali.  They rightly assumed that everyone would be too engrossed in watching the fight on television to notice the break in; it was an ingenious bit of timely planning.

One gentleman broke into the office that night after a female member of the group, posing as a student interviewing the office’s FBI agent-in-charge, cased the building in the days preceding the actual break-in.  Once in, the Commission members simply walked in to the office building carrying suitcases and carried out every file folder and scrap of paper therein.  Back at one of their residences, the members sorted through the material and determined those documents that proved their suspicions about the Bureau’s illegal surveillance activities.  These were then sent to newspapers where story after story began to be published, undermining the FBI’s contention that all it had ever sought to do was protect Americans and certainly not to spy on them.

A larger part of the story that would take too long to fully recount here involved the uncovering of a Hoover pet project known as COINTELPRO.  It ran from the 1950s to its discovery in the 1970s.  The film covers the Church Committee – named after Senator Frank Church who chaired the congressional committee investigating the FBI’s activities under COINTELPRO; it would mark the first time a congressional committee provided real oversight of a U.S. Government intelligence agency and Congress officially curtailed the Bureau’s surveillance power.  All of this occurred because eight normal citizens illegally gained access to an unguarded FBI office and its unsecure files.

The documentary interviewed Betty Medsger who wrote a book published in 2014 in which five of the eight identified themselves; four of the eight appear in the documentary as the Commission’s de facto leader had unfortunately passed away before he could participate in 1971.  The statute of limitations had run out five years after the break-in, but members kept their silence for decades.  It is a timely film that reiterates just how little the public knows about the amount of surveillance conducted by the FBI and other governmental agencies.  Recently, the NSA has come under attack from Congress, federal judges, other countries, and citizens for listening in on phone calls and receiving data from cell-phone carriers.  Apparently, these agencies did not let the events in Media, Pennsylvania, stop them or even slow them down; they just changed the way they did business and how they guarded the surveillance.  It is unclear whether agencies like the FBI have continued to infiltrate suspected anti-American organizations, but 1971 tells the story of how it happened once and history has a way of repeating itself.  It is a truly remarkable documentary that even strong supporters of our nation’s intelligence agencies should give a careful watch.