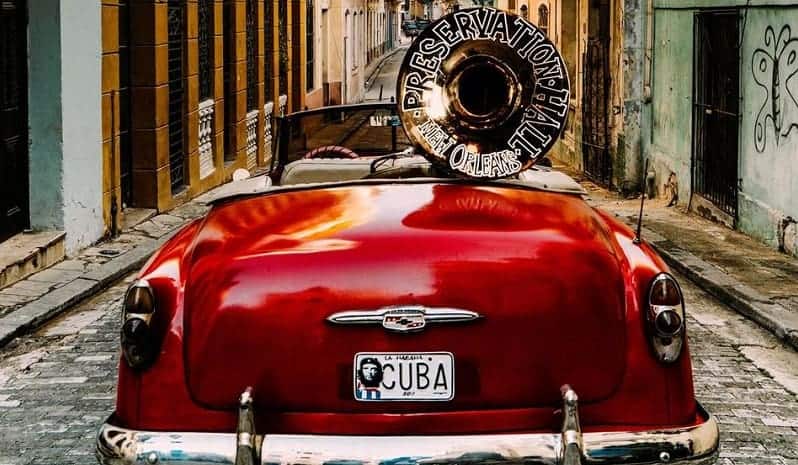 The lineup for this year’s New Orleans Film Festival has been announced with ten narrative feature films, eight documentary feature films, and eight feature films made in Louisiana. The 29th edition of the fest will take place October 17 – 25.

The opening night film along with the Spotlight program will be announced later, but for now you can check out the main slate below and for more details head over to neworleansfilmfestival.org.

A Tuba to Cuba | dir. T.G. Herrington, Danny Clinch | USA
A TUBA TO CUBA follows New Orleans’ famed Preservation Hall Jazz Band as they retrace their musical roots from the storied city of jazz to the shores of Cuba and in turn discover a connection that runs much deeper than could have been imagined.

Chained for Life | dir. Aaron Schimberg | USA
A beautiful actress struggles to connect with her disfigured co-star on the crowded set of a European auteur’s English-language debut.

Family First | dir. Sophie Dupuis | Canada
Constantly walking a tightrope, JP tries to maintain a proper balance between the numerous needs of his family, his job with his brother, and his involvements in his uncle’s drug cartel.

Fort Maria | dir. S. Cagney Gentry, Thomas Southerland | USA
Four women in the South are connected by the death of a dog.

A Haunting Hitchhike | dir. Heejae Jeong | South Korea
NORTH AMERICAN PREMIERE. 16-year-old girl Jeong-ae is on her way to find her long-lost mother, believing that she’s the only hope left to her.

Jules of Light and Dark | dir. Daniel Laabs | USA
WORLD PREMIERE. Two young lovers, Maya and Jules, are found wrecked on the side of the road in North Texas by a loner roughneck, Freddy. As her relationship crumbles, Maya forms a friendship with Freddy, whose past mistakes and experiences offer her insights on her life.

Pig Film | dir. Josh Gibson | USA
NORTH AMERICAN PREMIERE. In an empty world, a solitary female mechanically follows the protocols of a factory hog farm. Her labors are sporadically punctuated by musical rhapsodies as she moves toward the impending end.

Solace | dir. Tchaiko Omawale | USA
SOUTHERN U.S. PREMIERE. A 17-year-old orphan is shipped off to her estranged grandmother. She plots her escape while navigating a foreign environment, new friendships and a hidden eating disorder.

América | dir. Erick Stoll, Chase Whiteside | Mexico
América is a story of brothers confronting the chasm between adolescent yearning and adult realities when brought together to care for their ailing ninety-three year old grandmother.

For the Birds | dir. Richard Miron | USA
A woman’s love for her pet ducks, chickens, geese, and turkeys—all 200 of them—ignites a battle with local animal rescuers and puts her marriage in jeopardy.

Jaddoland | dir. Nadia Shihab | Kuwait, USA
WORLD PREMIERE. A visit to her mother’s home art studio in Texas prompts the filmmaker to explore the meaning of home and the search for belonging across three generations of her Iraqi family.

Man Made | dir. T Cooper | USA
Traces the paths of four transgender male bodybuilders as they prepare to step on stage at the only all-trans bodybuilding competition in the world.

The Unafraid | dir. Heather Courtney, Anayansi Prado | USA
A look at the personal lives of three DACA students in Georgia, a state that has banned them from attending their top state universities and disqualifies them from receiving in-state tuition at any other public college.

While I Breathe, I Hope | dir. Emily Harrold | USA
WORLD PREMIERE. This film explores what it means to be young, Black, and a Democrat through the experiences of South Carolina politician Bakari Sellers.

Wrestle | dir. Suzannah Herbert, Lauren Belfer | USA
The wrestling team at JO Johnson High School in Huntsville, which has been on Alabama’s failing schools list for many years, fights their way towards the State Championship and the doors they hope it will open.

Bending Lines: The Sculpture of Robert Wiggs | dir. Allison Bohl DeHart, Peter DeHart | USA
Obsessed with the repeating geometry of nature, a sculptor works in the space between art and science.

Buckjumping | dir. Lily Keber | USA
WORLD PREMIERE. Buckjumping takes the pulse of present-day New Orleans by turning to its dancers, the men and women who embody the rhythm of the city and prove it on the streets every chance they get.

The True Don Quixote | dir. Chris Poché | USA
WORLD PREMIERE. Danny Kehoe lives an ordinary life that leaves him bored nearly to death. His only escape is in his collection of books and comics, all recounting, with great inaccuracy, the romantic tales of the chivalrous Knights Errant. When those books are taken away, he goes mad. In his desperation, he re-christens himself as the last and greatest knight of all, Don Quixote.

This Little Light | dir. Ada McMahon, Wendi Moore-O’Neal | USA
When Black feminist freedom singer Wendi Moore-O’Neal married her now wife, Mandisa, she was fired from her job as a community organizer. This is a self-determined portrait about the Black Southern Freedom movement.

This Taco Truck Kills Fascists | dir. Rodrigo Dorfman | USA
WORLD PREMIERE. Jose Torres-Tama is on a mission: to create a revolutionary Taco Truck Theatre with a simple message: “No guacamole for immigrant haters”.

Tomorrow Never Knows | dir. Adam Sekuler | USA
The uncomfortable reality of death is faced by Shar and Cynthia who, upon Shar’s diagnosis with early-onset Alzheimer’s, make a brave and difficult decision.