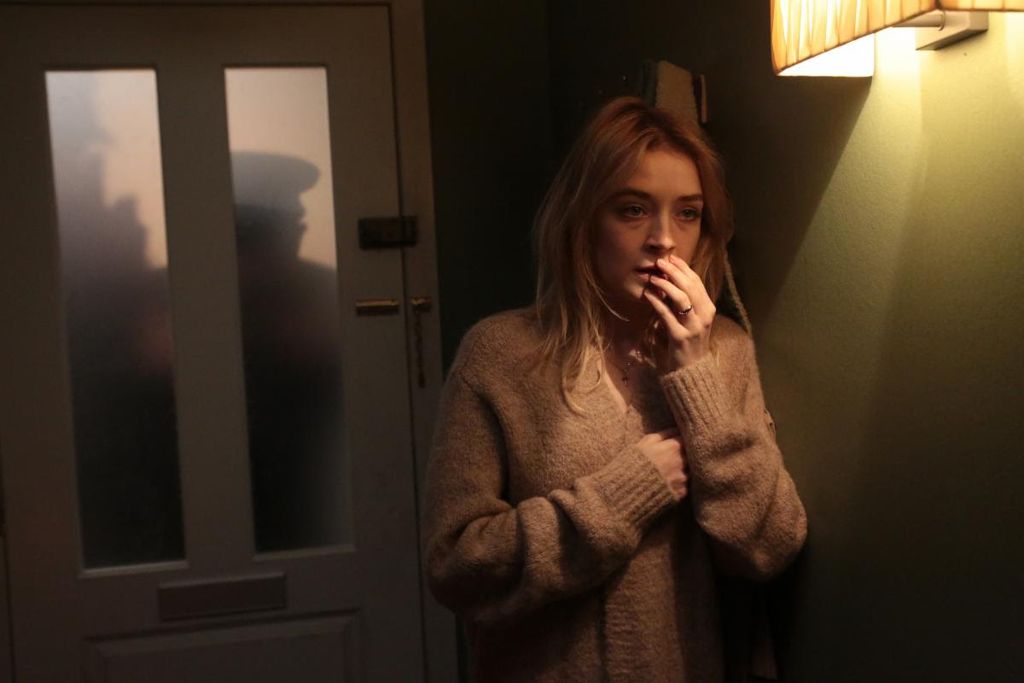 In its focusing on a widowed mother of two misbehaved kids who are haphazardly thrown into a brutal criminal underworld, the gritty Irish thriller A Good Woman is Hard to Find plays dangerously loose with pathos. After the gang-related murder of her husband, Sarah’s only resolve in her crushingly mundane and challenging existence is to do right by her children (one of them rendered mute from being witness to the murder) despite the clear lack of support from friends or family.

This simple, noble goal becomes irreparably complicated by classical noir happenstance as a two-bit drug dealer named Tito shows up at her door, stashes a cache of stolen drugs from the local mafia in her home, and decides to make nightly visits to run his small-time drug empire out of Sarah’s bathroom. While the verbal abuse and threats she receives from Tito were were perilous enough, the encroaching fury of the brutal mafia sends Sarah down a dire journey that accrues more bodies and bloodshed than you’d expect from a reserved mother of two.

There are times where Abner Pastoll’s followup to Road Games dips too far on the spectrum of what hardships we can subject our protagonist to before our pathos for her just becomes absentminded pity. Underwritten, as she is to be only defined by the safety and well-being of her bratty children, the crushing weight of her life as she is pushed through the uncompromising grit of the neo-noir makes the significance of her suffering somewhat masked.

Did Sarah’s hardening journey through Northern Ireland’s criminal underbelly really need to include a sexual assault scene or an absuive mother so comically uncaring that she just hurls insults at her and her children whenever they come to visit? While not unwatchable, there are times when A Good Woman is Hard to Find exerts itself in baptizing its main character in hardship, where pushing her to the edge via circumstance to resist and fight the underworld becomes uncomfortably pitiable.

However, the centralizing performance of Sarah Bolger gives needed depth to this one-dimensional suffering. While most of the cast feel cartoonishly shallow, from the overtly crass Tito to the flamboyantly cruel mob boss in Leo Miller (who insufferably offers anecdotes and quips while he tortures people), Bolger’s performance is levelled and treats the material with a needed severity.

The realities of her descent and the things her unlikely circumstances are now forcing her to do are communicated effortlessly from her nuanced and layered performance. While the script might leave her flat, Bolger fills out her character through an anchoring performance, which really gives the succession of misfortunates a needed throughline. When things escalate and bodies begin to stack up in her drive to protect her children, the escalation feels earned through Bolger’s foundational presence.

Speaking of escalation, the film runs into some awkward pacing and storybeats when it tries to overextend itself. The revelation associated with her husband’s murder transforms the tone of her journey from a story of survivial to one of a revenge-thriller, and the film can’t quite pull off this tonal shift. Though it tries — through a brutal upsurge in violence, a schizophrenic

Colin Stetson-esque synth score, and a sterile visual register pulled from an assortment of dreary neo-noir films that preceded it — A Good Woman is Hard to Find was more effective when it was grounded and harnessed its over-her-head peril to good captivating effect.

Pastoll tries to do too much with what is a rather simple narrative and overcomplicates the goodwill imbued into the character with a showy and obtrusive ending that didn’t so much put her suffering into perspective as it did seem clearly influenced by other films on the market.

Even though it has a tendency to get intolerable through its character writing or oddly placed narrative beats, A Good Woman is Hard to FInd is an enjoyably taut exercise. When its priorities are in check and it knows what it wants to be, the execution is well done and provides a gripping — if fleeting — tale of maternal protection and survival.