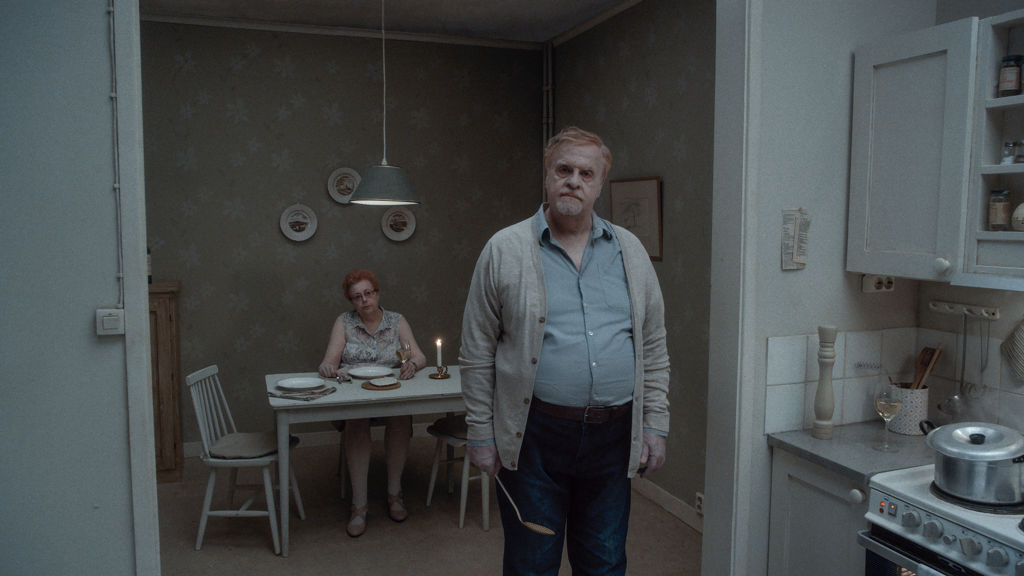 Those familiar with the eclectic style of Roy Andersson will not find much in terms of evolution in his latest slice of restrained, self-contained cinema of exploration. If you have experienced his much lauded Living Trilogy consisting of Songs from the Second Floor, You, the Living, or the wonderfully titled A Pigeon Sat on a Branch Reflecting on Existence, there will be nothing stylistically in his latest philosophical work About Endlessness that will surprise.

Constructed out mostly freestanding vignettes of long, immobile takes, the film is a series of tableaux and mini portraits reflecting on the banality of human life. Andersson’s understated and inactive style, made from his moody minimalism, allows for a lot of potential meaning to be wrung out of his momentary and voyeuristic glimpses at life from a distant; thus, much of the potential fascination with his latest film rests inherently on whether his signature style still bears ideological fruit.

The film, much like in a dream, tends to amble between its self-contained sequences — with the only thread of continuity between them being an unseen narrator who sets up each vignette with a simple observation. For the most part, these still-lifes are marked for their obstinate tedium and uneventfulness: a couple sits on a bench and stares at the gloomy sky; a man tries to sleep on the mattress where he stores his money; a woman is left at a train station alone while her acquaintance runs late; a distracted waiter over-pours a customer’s wine; a group of teenage girls dance outside of a cafe; etc.

These scenes contain a haunting beauty to their simplicity — the crushing, almost hypnotic banality of their premise complimenting the understated approach of long, uninterrupted focalization. Peering into the lives of these random characters, the film resists a narrative throughline and rewards contemplating the purity in the overall approach.

Yet Andersson’s film is not so readable as to rotely ruminate on the beauty of the inherently quotidian. About Endlessness, in all its stylistic and narrative reticence, has moments of bewitching magical realism and larger-than-life cruelty that fill out Andersson’s introspective vision. We witness a couple drift through the clouds over war-torn Germany; Adolf Hitler sulks in his bunker among his despondent generals; a pleading soldier is unceremoniously executed by a firing squad; a priest losing his faith has recurring nightmares of reenacting the stations of the cross; etc.

These vignettes offer a broader implication for Andersson’s focus on the banality of existence; the human experience, such as what we can infer about it from our collective history, contains multitudes of the mundane and barbaric. His film’s circuitous impression of life through the haze of dreary modern eyes is what gives About Endlessness the value of revisiting Andersson’s signature style once again.

Andersson is ever consistent in his thematic concern and his stylistic hangups, and this is one of the few times when calling a film “more of the same” is said out of admiration. Serving as an ideological epilogue to his “Living” trilogy, About Endlessnesst is as revealing of the human condition as any of his more lauded films.