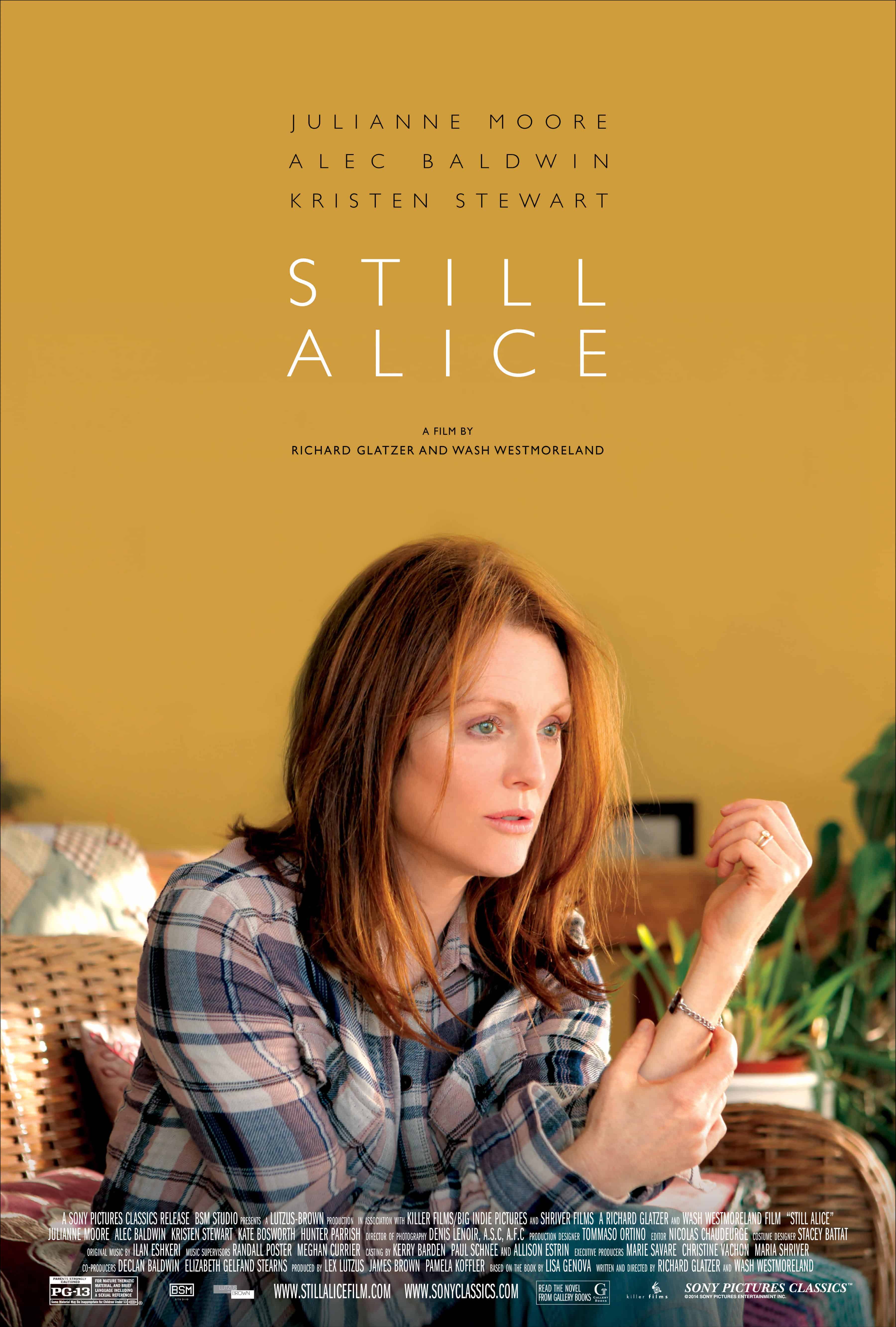 Films about debilitating diseases can be uplifting like The Theory of Everything, sentimental like The Notebook, unexpected like Amour or surprisingly funny like The Intouchables. Some films put the disease front and center while others treat it as part of a character. How the film handles and tackles the drama surrounding the disease can make or break it. The latest film from the directing team of Richard Glatzer and Wash Westmoreland, Still Alice, is a film that looks at Alzheimer’s Disease, and unlike the aforementioned films, it never rises above being a heavy-handed “disease-of-the-week” TV movie.

Alice Howland, played by Julianne Moore, is a renowned linguistics professor. She’s happily married with three grown children and a doctor for a husband, John, played by Alec Baldwin. When Alice begins to notice she is forgetting simple things and it is gradually growing worse, she makes an appointment with a neurologist and receives a devastating diagnosis. She has been diagnosed with early-onset Alzheimer’s Disease.

One of the major problems that Still Alice has is that it doesn’t have a single convincing performance. Julianne Moore is a fine actress, but you would think someone of her caliber would be able to truly embody this dreaded disease. There is one moment that truly captures the emotional devastation of the disease, where Alice breaks down in her husband’s arms. Unfortunately, there’s another moment where she delivers a heavy-handed, very-calculated, paint-by-numbers speech that just rings falsely. Alec Baldwin delivers a one-note performance. You never get a sense of just what his character’s emotional state is. Is he being distant? Does he even care? What’s his deal? It isn’t until he actually breaks down late in the film that you get a sense of his state, but it’s too little-too late. Kristen Stewart also stars as one of the Howland children, but you are never once convinced that this was Lydia Howland, rather simply Kristen Stewart playing a part. Her character’s arc was certainly predictable, and Stewart plays it in that fashion. The film also features Kate Bosworth, Hunter Parrish and Eha Urbsalu.

Most of the performance issues can be attributed to how the characters were written. Based on the popular novel by Lisa Genova and adapted by Glatzer and Westmoreland, the film version is pretty generic.

If you recall the ending of The Notebook (spoiler warning here if you haven’t seen it), when elder Allie recognizes elder Duke for a brief moment and just as quickly succumbs to her disease and forgets him…it’s devastating. It took mere minutes for that film to capture the devastation, and never once does Still Alice achieve that level of emotion.

This film makes jumps in time that can at times be jarring and a bit mechanical. When the film looks like it’s going down a dark path and would seem like it’s reaching the logical conclusion of its story, it loses a significant amount of steam as the film goes beyond that moment.

Still Alice proves to be fairly forgettable, overly sentimental, false and unconvincing. There’s no denying that her disease is devastating, but this film is a very generic telling of a life with Alzheimer’s. Although this is a story that should easily get an audience on its side, this adaptation simply makes you want to tune out.