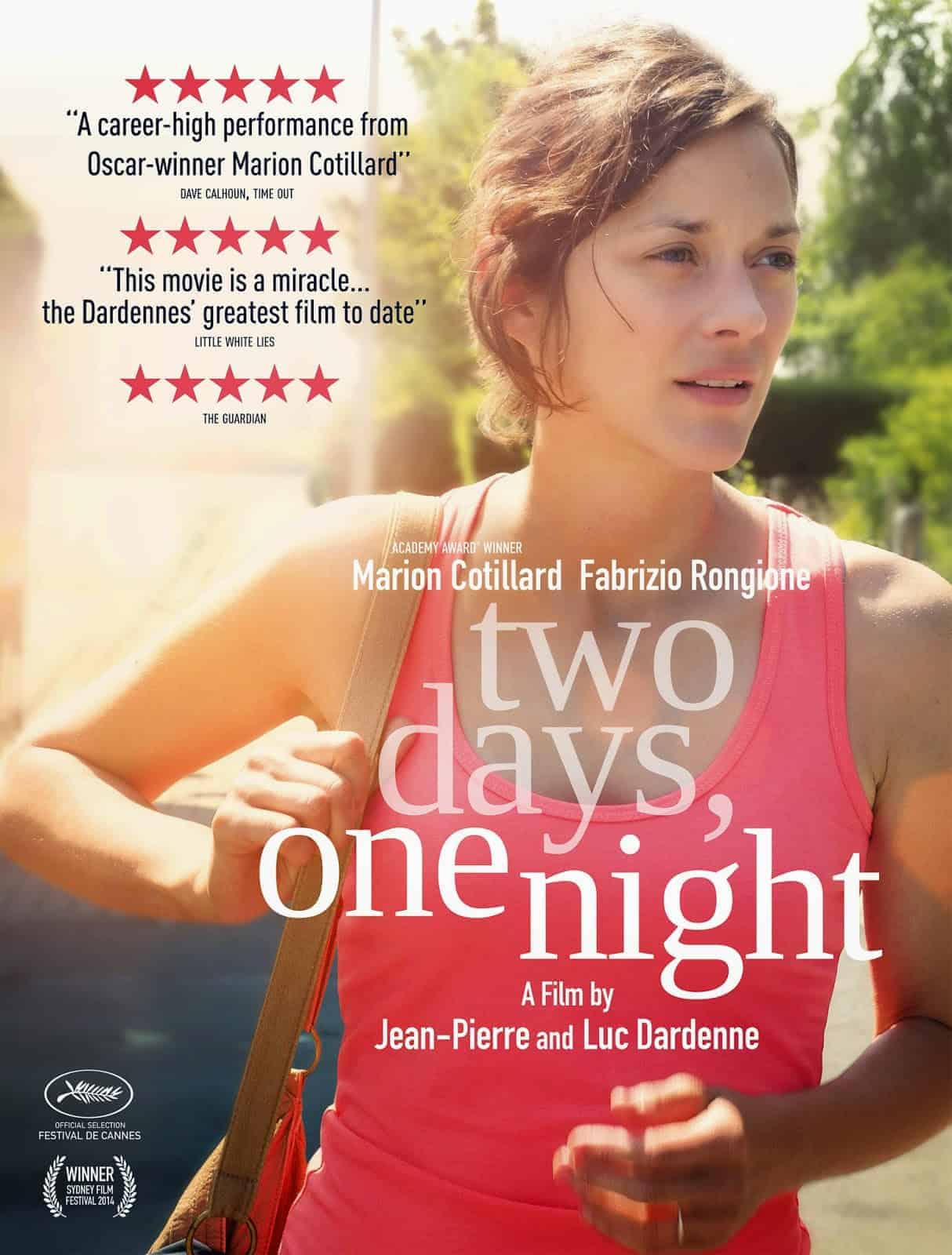 Possibly one of the most harrowing life experiences is having to face is the fear of being laid off. There is a dark cloud that hovers over you as you are left to ponder just what will happen and just what exactly the future has in store. There are many reasons an owner might lay off staff. Business is bad. Performance issues. Seasonal work has dried up. Keeping the employee would prevent others from receiving annual bonuses. (Wait, what?) But that is just the situation that the Dardenne brothers look at in their latest film, Two Days, One Night.

It’s a Friday, and Sandra (Marion Cotillard), a young Belgian mother who has been on sick leave, receives a call that her job is letting her go. While she wishes to remain with the company, she discovers that her continued employment comes with a hefty price. If she remains, then other employees will not receive their annual bonuses. If she is let go, then everyone will receive bonuses. Sandra’s fate was decided by a vote, and some questions to its validity have been raised. Sandra’s boss agrees to allow a silent vote on Monday. Only a majority vote can keep Sandra on board. She has two days and one night to talk to, and convince, her fellow co-workers to forego their bonuses, which many depend on to get by, so she can keep her job.

Marion Cotillard is excellent as Sandra. She truly captures her character’s desperation and depression as she fights to keep her job. She physically conveys the weight that rests squarely on her shoulders through her mannerisms, posture and gait. With every victory she seems looser, and with every loss she becomes very tense. Cotillard goes through a range of emotions with peaks and valleys that rise and drop on a dime. She is in a harrowing predicament, and she effectively portrays just how disheartening and difficult this real-world situation can be. She receives good support from Fabrizio Ronglone, who plays Manu, her husband. He plays the dutiful husband who will help her however he can, even so far as to drive her around town to talk to her co-workers. The large supporting cast does a good job of playing out their particular characters’ monetary motivations and reasoning.

Written and directed by Jean-Pierre and Luc Dardenne, who last gave us 2011’s The Kid with a Bike, this drama presents a universal dilemma that will likely have anyone wondering what they would do in that situation. It’s certainly awkward as you watch one character try to justify why they are more important than what the other’s need. On the flip-side, it’s fairly uneasy to watch as characters put a monetary value on one’s worth, not out of greed – but necessity. There are many dilemmas that viewers can see both sides of, and, in many cases, it can be tough call as to which way to go. As a viewer, you want to see Sandra succeed, but you can still feel the weight of the sacrifices being made. The Dardennes keep you guessing as you wonder just how things are going to unfold and how it will end.

Two Days, One Night is well written, directed and performed. On the surface it seems to come off like a “race against time” sort of thriller, but underneath it’s an engaging drama about one woman’s battle back from depression. It’s a journey that Academy Award-winner Marion Cotillard effectively portrays, and thanks to her – despite its depressing nature – it may very well be worth taking.